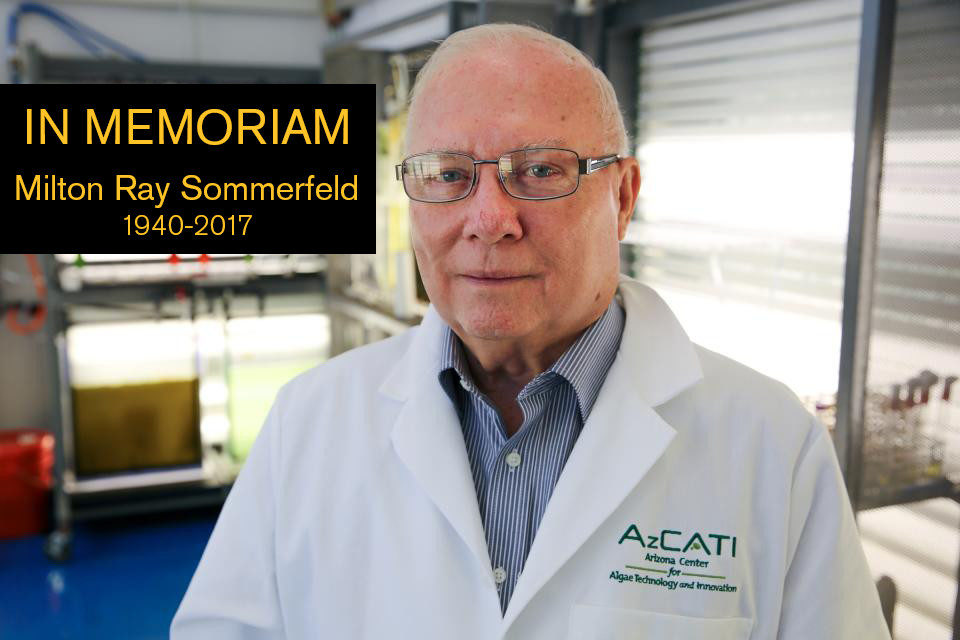 Last week, Arizona State University lost a gifted researcher, respected educator and beloved friend of 48 years. Milton Sommerfeld passed away on May 16, 2017, after a battle with cancer.

Sommerfeld was one of the nation’s leading algae researchers, known affectionately as “The Wizard of Ooze.” He was the founder and co-director of Arizona Center for Algae Technology and Innovation, a world-class testbed and research facility for the development of algae-derived products.

Though he spent nearly 50 years at ASU, Sommerfeld’s life started in Thorndale, Texas. He was born November 24, 1940 to Eldo and Julia Sommerfeld on the family farm. In 1962, he earned his bachelor’s degree in biology from then-Southwest Texas University, now Texas State University. Four years later, Sommerfeld received his doctorate in Botany from Washington University in St. Louis and began his nearly 50-year career at ASU.

“Milt was a wonderful colleague, scientist and administrator,” says Bert Jacobs, Director of the School of Life Sciences, an unit of the College of Liberal Arts and Sciences. “He provided incredible service to ASU and his area of expertise, algal biology.”

Sommerfeld lived and breathed algae, and his passion for the green goop was evident to everyone he met — and not only because of his habit of substituting “algaeee” in lieu of the traditional response to “say cheese” for photos.

“Over the years, Milt must have hosted thousands of visitors to AzCATI but he never turned down a request for a tour or a request from a colleague for a guest lecture,” says Larry Olson, an associate professor of environmental and resource management. “Milt was a true believer in the promise of algae to help solve some of society’s most pressing problems — and you were too after listening for a while.”

“I have watched him speak to groups of school children, members of the community and ASU students, faculty and staff,” says Anna Wales, business relations coordinator at the Polytechnic School. “No matter what group — he always found time to share his excitement about algae research!”

Sommerfeld’s storied career at ASU included a tenure as Associate Dean of the College of Liberal Arts and Sciences as well as the department chair of Botany and Microbiology. In these roles, Jacobs says Sommerfeld “was instrumental in moving ASU and the life sciences at ASU forward — and he always did it with a smile on his face.”

SOLS Professor Wayne Frasch recalls a moment at an awards ceremony when he and a collection of colleagues were with Sommerfeld, who pointed out he’d hired all of them during his time as department chair. ” He said, ‘Look at all that you have accomplished. I’m really proud of you, and I predicted that each you would be excellent when you were interviewing,'” says Frasch, who noted that Sommerfeld had a way of making the responsibilities of department chair appear easy.

“During a period when new buildings at ASU were a rarity, Milt was the one who looked after every detail of design and construction of the Life Sciences-E Wing, and made the building a reality,” says Frasch. “He could be a feisty bulldog, and he could be demanding because he never lost sight of what was required to move the department, and the university in the direction of excellence. Despite these responsibilities, Milt continued his basic research that expanded our understanding of the diversity of algal species. Ultimately, he used his expertise and knowledge of algae to spin out one of the most successful biotechnology companies launched from ASU to date. As a result, I feel that the pride he expressed that day about in our accomplishments is dwarfed by how thankful we are for his contributions that enabled us to succeed, and his achievements that have been so influential in raising ASU to the level of excellence that it is today.”

Sommerfeld’s dedication to research resulted in more than 300 scientific publications to his name. But his expansive body of work is only one part of his legacy. He’s remembered as a kind mentor, providing guidance to peers as well as numerous doctoral, graduate and postdoctoral students, not to mention the thousands of young minds he inspired through teaching.

“When I moved into administration, Milt was one of my mentors and role models, providing advice on how to be an administrator and still keep an active research lab going,” says Jacobs.
“I will miss his kindness, and his support.”

Sommerfeld took pride in the accomplishments of those he mentored just as much as his own, says Olson.

“Milt received countless awards and recognitions during his career and he was deservedly proud of his discoveries,” says Olson. “But I think he was even more proud of the accomplishments of his students – particularly the youngest ones. He worked with many high school and elementary school students who came to him for samples of algae and ideas for their science projects. When they won, which they frequently did, he would list their awards right along with his grants or publications when he wrote up his end of year report.”

A valued member of the Polytechnic School faculty, his passing has been felt at ASU’s easternmost campus.

“In 23 years of being at ASU — Milt stands out as one of the best educators I have ever met,” says Wales. “He was a friend to everyone, and generous with his time and talents. No question was ever too small for him to answer. He was patient and kind, and I will miss him always. In academia… people come and go — but the legacy that Milt leaves isn’t a small one. He has influenced and motivated so many people in his lifetime. Things will never be the same without him here.”

In lieu of flowers, the family requests donations to the Milton Sommerfeld Fund to Advance Algae Research. Checks can be made payable to the ASU Foundation and sent to PO Box 2260, Attn Cash Receipting, Tempe, AZ 85280 with “In Memory of Milton Sommerfeld” noted. Donations will be routed to a permanently-endowed fund to assist students.

Learn more about the work and life of Professor Sommerfeld

The Wizard of Ooze 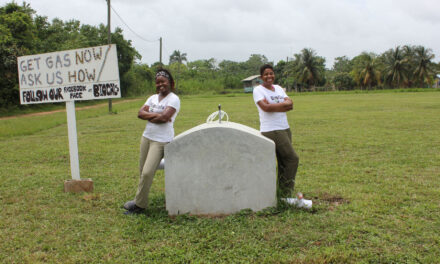 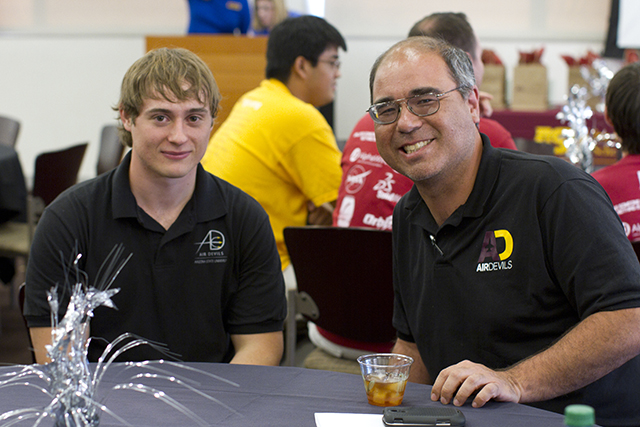 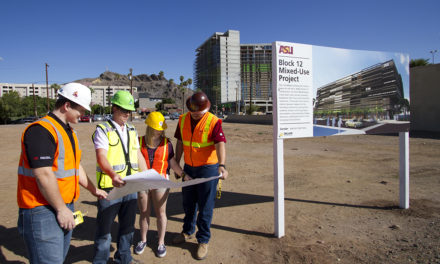 STEM designation is step up for construction management program