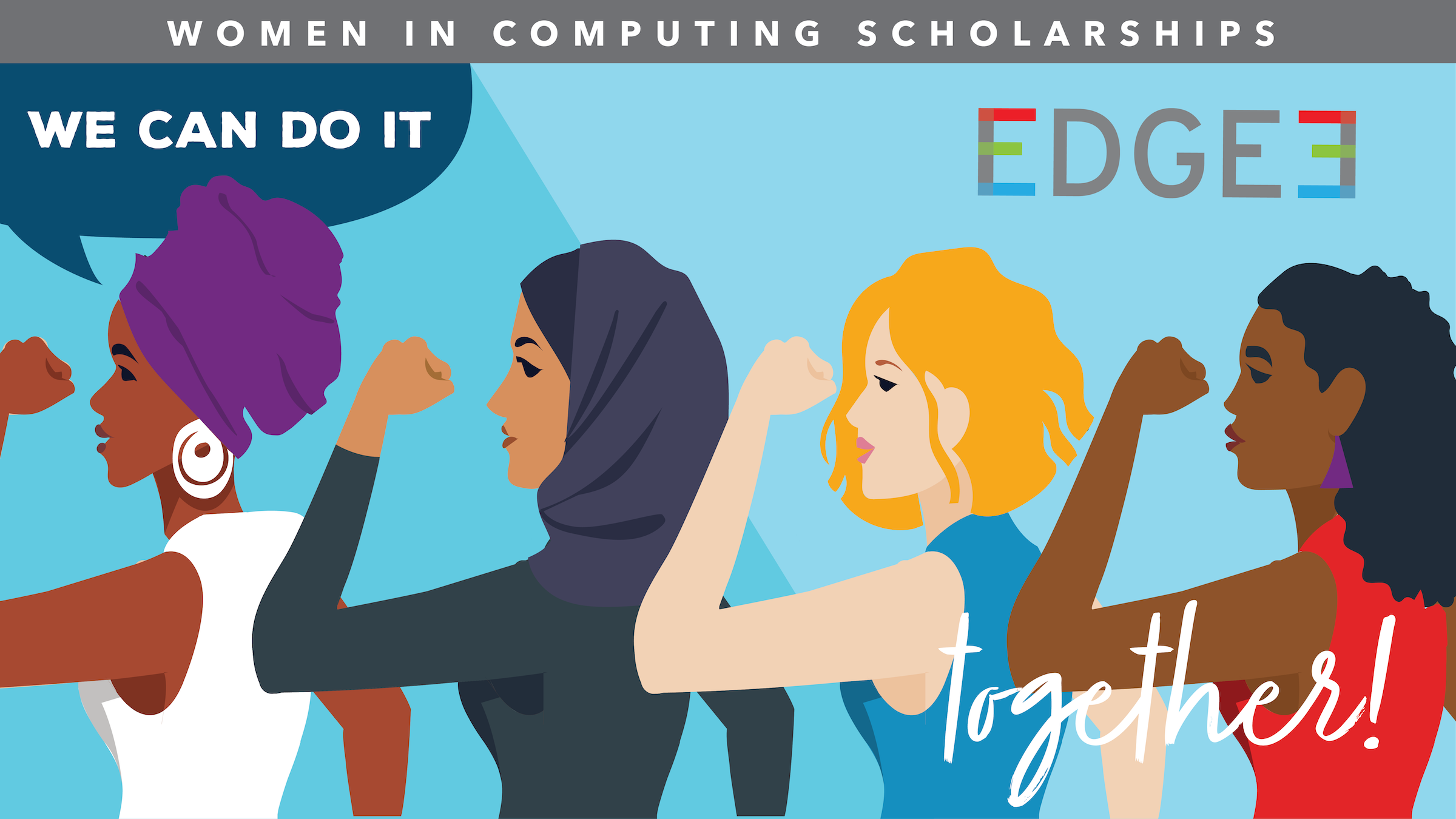 Above: The EDGE3 Women in Computing Scholars program is a multi-university program dedicated to the financial and educational empowerment of women in computing majors at different universities in Arizona and across the world. Graphic courtesy of EDGE3 Technologies

In the early days of computer technology, during the 1940s through the 1960s, women were a critical part of the computing workforce. In the 1970s, Women earned fewer than a quarter of computer science degrees, with that number rising to 37% in the mid-1980s during the rise of the personal computer. However, despite the astronomical growth in computing applications, according to ComputerScience.org, women are now earning fewer than 20% of all computing degrees.

Tarek El Dokor, founder and CEO at EDGE3 Technologies, has decided to do his part to help increase that number by making it easier for women to succeed in this field. EDGE3 is a company that specializes in AI-based in-cabin monitoring solutions, with deep learning expertise spanning over a decade.

El Dokor and EDGE3 Technologies have awarded six $2,000 Women in Computing Scholarships to students in the Ira A. Fulton Schools of Engineering at Arizona State University. They have committed to funding annual scholarships for female undergraduates from Arizona working to earn degrees in computing.

El Dokor finds it especially important to launch the scholarships during a time when women are disproportionately leaving the workforce.

“More than at any other time, the COVID-19 pandemic puts populations that are more vulnerable at greater disservice and at greater risk,” says El Dokor. “If you want to talk about an endangered species in the workforce in this country, that’s women in computing. It’s interesting that in the 1980s we had more women going into computer science per capita than we do today.”

El Dokor, a former ASU electrical engineering doctoral student, recognizes the inequalities that exist in STEM education and that women face an uphill battle in finding computing jobs. He has worked hard to ensure that EDGE3 Technologies, headquartered in Tempe, is an exception to that reality. The company’s staff is equally male and female.

EDGE3 Technologies is a global leader in in-cabin AI-based analytics for monitoring driver and occupant well-being. EDGE3’s products and solutions are distributed across the world and have made a positive and lasting impact on overall driver and passenger safety via EDGE3’s Vision AI product offerings.

“Our goal is to leave the world a better place than when we started,” says El Dokor. “As a tech company, we need to be able to hold ourselves to a high standard and espouse goals that save lives versus invading privacy and other things that tech is doing today, in some cases. I think we’re capable of so much good in this world and that’s our focus; that’s our drive.”

Investing in the future 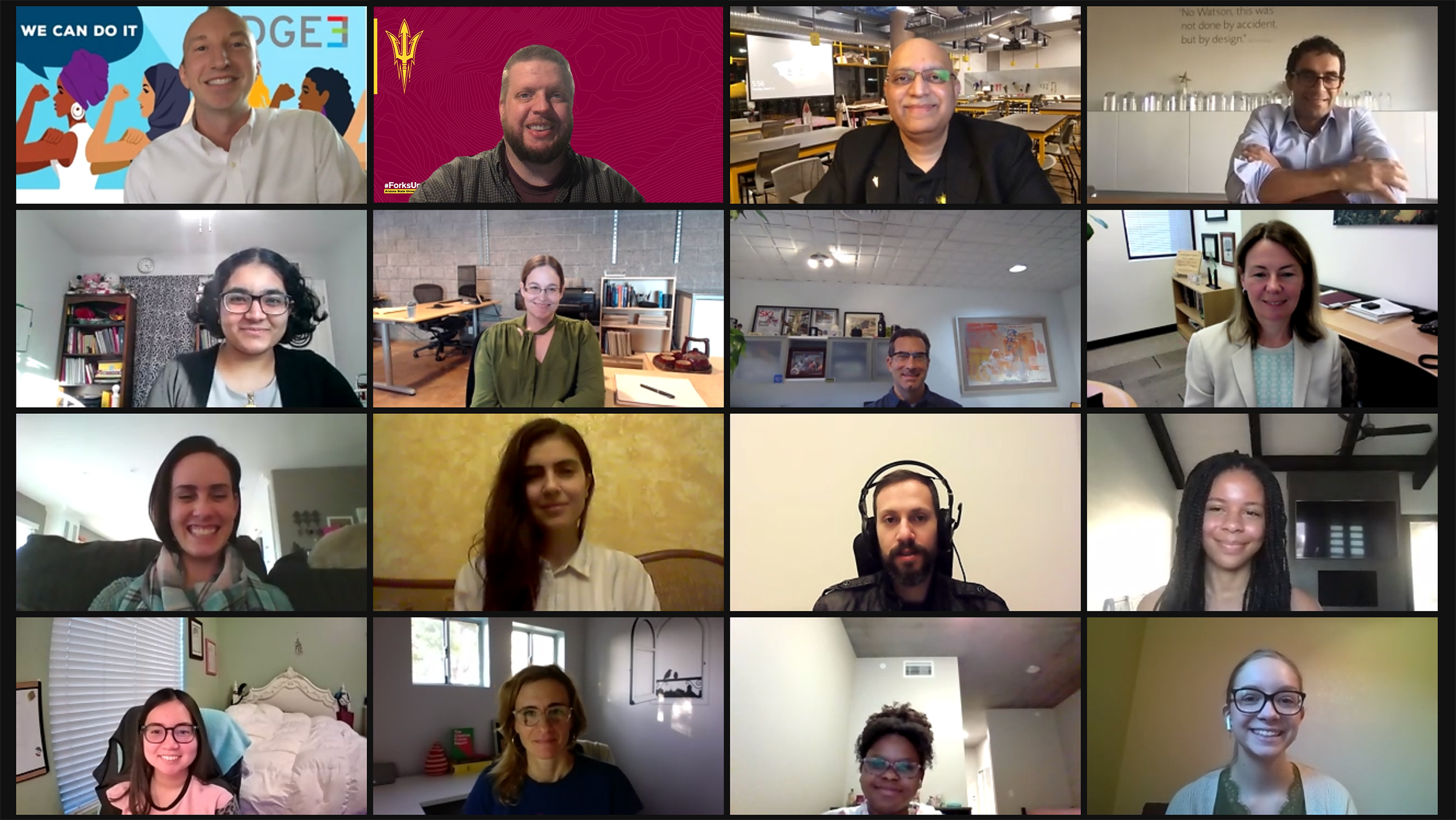 The EDGE3 Scholars were honored in a virtual ceremony where scholars got to interact with EDGE3 founder and CEO Tarek El Dokor (top right) and other members of the EDGE3 Technologies leadership team.

The current EDGE3 scholars were honored in a virtual ceremony in late November. Students had an opportunity to meet and talk with El Dokor and other members of the EDGE3 Technologies leadership team, including Jordan Cluster, who is a senior member of the technical staff and one of the first employees at EDGE3 Technologies.

“I encourage all the students to work toward bettering humanity with technology,” says Cluster. “That is our vision for the EDGE3 scholars. Believe in yourselves, because the work you pursue can and will make a difference and have a big impact.”

Cluster offered a real-world example of the need for diversity and inclusion in artificial intelligence.

“We often work with data sets that are biased,” says Cluster. “If you aren’t careful then that bias gets introduced into your AI.”

In an example of data bias, Cluster recounts an instance of a company developing AI to automate resume screenings during the hiring process. The company unfortunately trained the AI on historical data with whom the company had hired and considered in the past. Being a male-dominated field, the model ended up penalizing resumes belonging to women.

“Fortunately, they discovered that and were able to shut it down, but it illustrates just how important it is to bring in different viewpoints to detect bias and make sure we aren’t accidentally building it into our systems as we create them,” says Cluster. “We need to make sure we don’t propagate that. We know that your viewpoint really matters and you can make a difference.”

Computing and other STEM fields benefit from having more female representation in the field by including the rich talent pool that is often overlooked, and the scholarship recipients are grateful for the opportunities provided by EDGE3.

“Inclusion is critical for us to be successful in any endeavor that humankind takes on,” says Tina Sindwani, one of the six students receiving the EDGE3 scholarships and a first-year computer systems engineering major. “I have always loved science, and engineering especially. I could apply my programming and engineering skills to any field in the entire world. In the future, I see myself contributing to the space industry while becoming a powerful STEM communicator.”

“Having diversity in any discipline is vital to an industry’s success,” says EDGE3 scholar Gloriana Pavey, a first-year computer science major. “Women need to have a voice when it comes to the advancement of society. There is so much to accomplish when it comes to technology. No matter who wants to be a part of that should have an equal opportunity to do so.”

EDGE3 Technologies is determined to leave a positive impact on the world. El Dokor wants to champion these young women and others, see them succeed and let them know that there are organizations that genuinely believe the world would be better by having more women in computing.

“The women who have received the first round of EDGE3 scholarships are all incredibly gifted,” says El Dokor. “We are giving these young women financial and reputational means and we are saying that we see them as industry scholars. We would like to see them get internships somewhere challenging and interesting, and then one day be giants in any organization that is fortunate enough to have them. We’d like them to know they are supported. We will also be supporting other female scholars at ASU and other Arizona universities.”

All six students chosen for the EDGE3 Women in Computing scholarships are from Arizona.

“It’s about being strategic about what we give,” says El Dokor. “The state of Arizona has given us everything we have as a company. So, we are giving back to the community around us and to a society that personally has embraced me and EDGE3 and that has championed us.”

By establishing the scholarships, El Dokor hopes other companies will step forward and do what they can to empower the next champions of computing.

“These women are going to step into careers that are going to change the world,” says El Dokor. “I would encourage other companies to realize how much opportunity is being lost, especially by women in computing, and try to enable more female engineering graduates in computing who are going to really transform the workplace.” 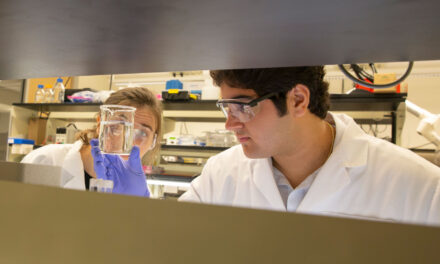 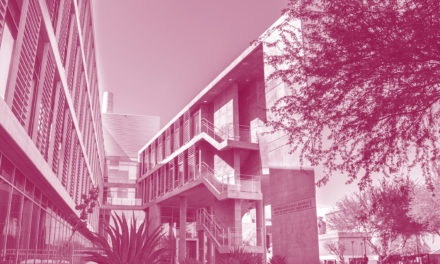