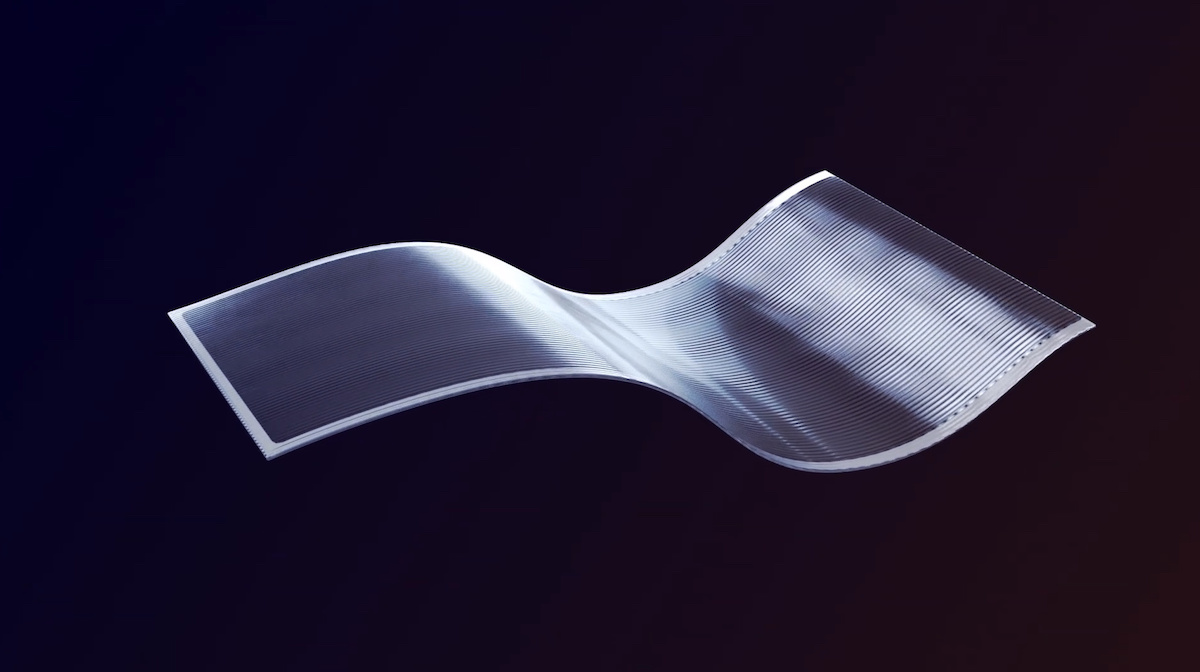 How can the space industry make interstellar science fiction a reality? One must-have is more economical and scalable solar energy for space.

Stanislau “Stan” Herasimenka, an electrical engineering assistant research professor in the Ira A. Fulton Schools of Engineering at Arizona State University, believes his startup, Regher Solar, has the solution.

One of the biggest challenges holding back our spacefaring activities — from satellites and in-orbit manufacturing to bases on Mars and asteroid mining — is the lack of affordable space solar panels to power them.

The focus of the current space race is on launching networks of satellites called constellations comprising hundreds or even tens of thousands of satellites. With private space companies such as SpaceX, OneWeb and Amazon all launching their own constellations to enable the delivery of global internet access in the next few years, the demand for solar energy to power these satellite networks is growing. 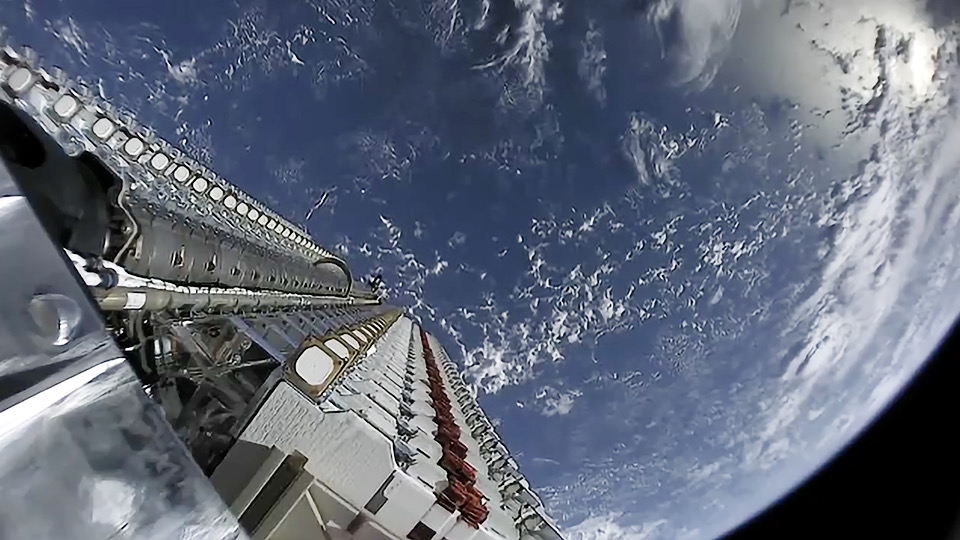 A SpaceX Starlink mission carried 60 satellites bound for very-low-Earth orbit. The satellites are part of a constellation, or a network of satellites, that will deliver global internet access. Photo courtesy of SpaceX

These and other satellite projects planned for launch in the next five years need 100 megawatts of power to operate, which is roughly the amount of solar energy used to power 20,000 residential houses in a year.

This may seem small, but the present space solar panel manufacturers can provide even less: only 2.5 megawatts in five years. With today’s industry, manufacturing enough space solar panels capable of producing 100 megawatts of power would take more than 10 years and roughly $60 billion.

“The reason is the solar cell technology they are using,” Herasimenka says of the tandem solar cells typically used in space-bound applications. “It’s actually a perfect technology in all aspects and I really love it, except it’s crazy expensive and it’s really slow to manufacture.”

Herasimenka and his partners at Regher Solar have been developing ultra-thin silicon solar cells that are projected to cost 90% less than tandem solar cells, are faster to produce, can be packaged into lightweight, flexible panels, and can still withstand the harsh environment of space.

Herasimenka came to ASU about 10 years ago as a doctoral student with a passion for solar energy research and an eye on commercializing his results.

He worked alongside prominent ASU solar energy researchers at the Quantum Energy and Sustainable Solar Technologies center known as QESST to develop technology and to found his startup through QESST’s initiative to help launch ventures.

Solar manufacturing is a difficult field. Only a few startups have been able to succeed. Herasimenka, however, had a twist in his approach. He thought he could make a particular type of solar cell — a silicon heterojunction solar cell — extremely thin, which, surprisingly, makes them more resilient for use in space. 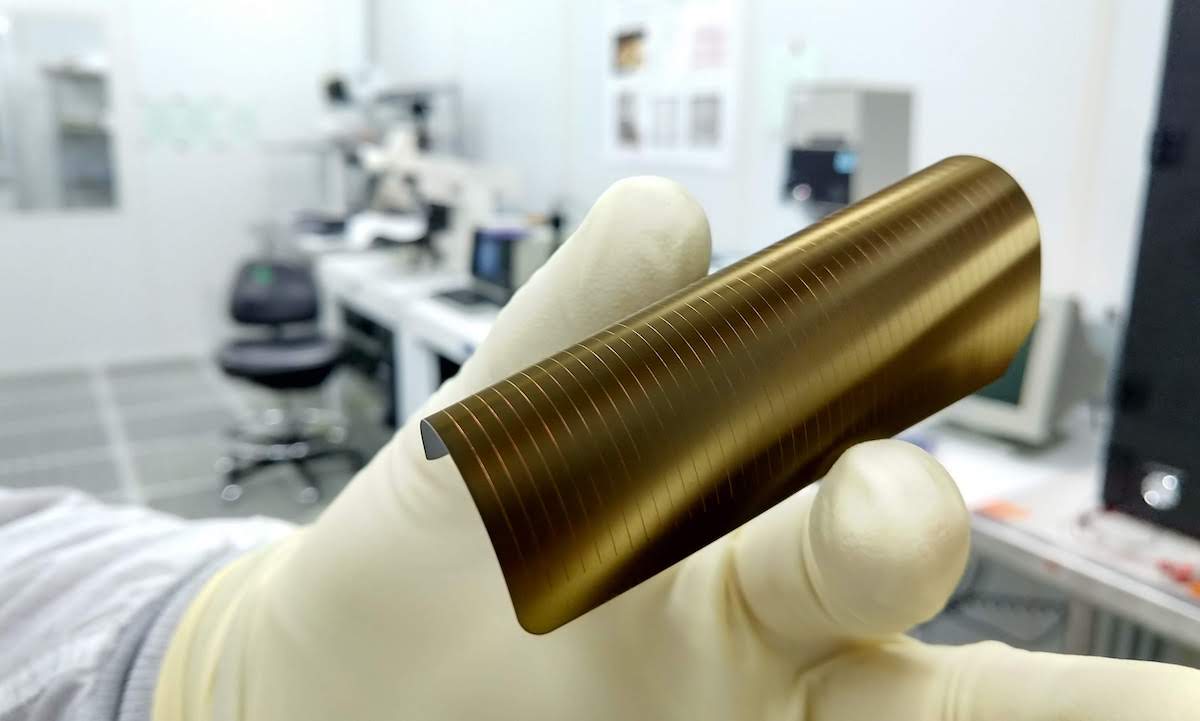 Regher Solar’s ultra-thin solar cell builds on the results of a simulation that shows thinner solar cells are better at resisting radiation abundant in space where many satellites operate. They’re flexible as well as faster and cheaper to manufacture than the type of solar cells typically used in space applications today. Photo courtesy of Regher Solar

These harmful particles are a big problem for satellites in space, particularly in a region of space known as the Van Allen belts, which trap radiation from solar wind and other cosmic rays. So, it’s important for solar cells to be resistant to that radiation to keep generating power for the electronics aboard the satellite.

To test his idea, Fedoseyev partnered with the ASU Solar Power Lab, where Herasimenka worked as a postdoc. Later the team realized that the initial model didn’t fully represent the actual space environment; the real picture was much more complicated. However, ultra-thin silicon cells demonstrated their potential advantage in experimental studies, which sparked the interest in their further development.

But it’s not only about radiation hardness. Making solar cells very thin also makes them flexible. Flexibility can potentially allow solar cells to be packaged into flexible panels to enable novel deployment mechanisms such as roll-up and z-fold.

A flexible panel made of ultra-thin silicon solar cells will weigh 90% less than the traditional rigid solar panel made of tandem solar cells. And less weight makes a satellite cheaper to launch. According to NASA’s Marshall Space Flight Center, it currently costs around $10,000 to put one pound of cargo, or payload, into Earth’s orbit.

However, manufacturing these thin, flexible cells with high efficiency is not easy. Herasimenka and his team have developed a unique process flow to enable mass production of high-efficiency, ultra-thin silicon solar cells using the tools and materials presently common in the terrestrial PV industry, producing rooftop solar panels.

“There was tremendous progress in terrestrial PV [photovoltaics] in the last 20 years, making volume manufacturing of silicon solar panels very effective and inexpensive,” Herasimenka says. “By leveraging this process, we will be able to manufacture gigawatts of solar panels meeting any potential demand for power in space in the next 20 years and beyond.”

On that idea, Herasimenka refocused Regher Solar, founded with solar industry expert Michael Reginevich, to develop solar panels for space. The company name combines the first three letters of Reginevich’s and Herasimenka’s surnames. They were originally planning to commercialize silicon heterojunction solar cell technology Herasimenka and Reginevich have developed, but found greater potential out of this world.

Over the past two years, the Regher Solar team has been redesigning their solar cells for use in space and working out the manufacturing kinks to great success.

Building off of an initial Small Business Innovation Research, or SBIR, grant from the U.S. Air Force in 2018, Regher Solar attracted additional SBIR funds from NASA and the National Science Foundation. The SBIR grant program is highly competitive and encourages businesses to conduct research and development for commercialization.

“The grant from NASA is looking into the future and explores how very-large-scale solar arrays can be built in space,” Herasimenka says.

But the big question is how to deploy them in space. So far, the largest solar array ever used in space is installed on the International Space Station, or ISS. The ISS solar array generates power up to 120 kilowatts and required several shuttle missions to install.

The concept of building very large-scale solar arrays using additive manufacturing and ultra-thin silicon solar panels is being developed by Regher Solar. The company is testing the feasibility of this idea in collaboration with Made In Space, Inc. under a NASA SBIR contract. Photo courtesy of Regher Solar

In collaboration with the company Made In Space, Regher Solar was awarded an SBIR contract from NASA to demonstrate the feasibility of this idea. Made In Space is famous for bringing a 3D printer to the ISS. At present, the company is testing its additive manufacturing system, Archinaut One, which will be capable of building large-scale structures in space.

The startup also earned a coveted spot in the Techstars Starburst Space Accelerator, a Los Angeles-based program to foster next-generation space technologies and new business models for those technologies. Techstars, a worldwide network that helps entrepreneurs, partnered with aerospace innovation catalyst Starbust to form the accelerator. Regher Solar was one of 10 startups in the inaugural 2019 Techstars Starburst Space Accelerator class. 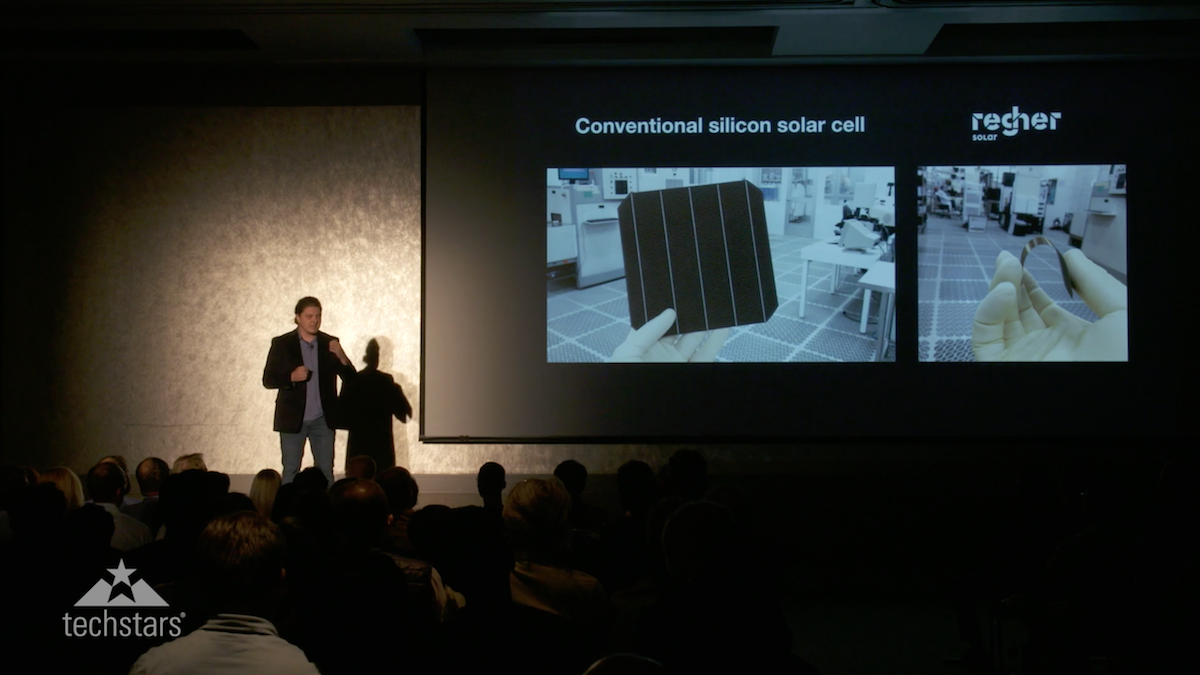 Stanislau Herasimenka pitches Regher Solar’s technology at the Techstars Demo Day event in October. The startup, based in part on Herasimenka’s research at Arizona State University, developed ultra-thin solar cells that are lightweight, cheaper and faster to manufacture and can withstand the harsh environment of space. Photo courtesy of Techstars

At the Techstars Demo Day, the culmination of Regher Solar’s time in the Techstars Starburst Space Accelerator, Herasimenka announced a partnership with SolAero Technologies to help further develop manufacturing processes for their ultra-thin silicon solar cells.

“[The push for satellite constellations] has created a demand for space power that SolAero and its industry peers cannot meet,” Ken Steele, director of integrated products at SolAero Technologies, said at a recent presentation at the Techstars Demo Day in October. “Regher Solar has the technology and the processing capability to meet the performance demand and the cost targets that the constellation market is demanding.”

Herasimenka most recently earned one of five Solar Energy Technologies Office, or SETO, awards won by ASU in 2019 to fund work to advance photovoltaic research and development. The $1.8 million award will help Herasimenka and his ASU colleagues to increase solar manufacturing capabilities in the U.S. by developing a PV Innovation Foundry — a new collaborative facility to help industry and academic users test their ideas on a pilot scale.

However, Regher Solar is procuring funding for more than research and development. The company has also signed a Memorandum of Understanding to deliver 17 megawatts of thin silicon solar cells for a private space company’s satellite constellation project by 2023.

“This is really, really huge if you think about it,” Herasimenka says. “It’s eight times more energy than the entire space solar industry would be able to deliver by that time, not even talking about 90% cost savings we can bring to our customers.”

Herasimenka is excited about the future of Regher Solar and the capabilities that a new generation of solar cell technology can bring to satellites, as well as to the future of in-orbit manufacturing and even moon and Mars bases.

“Regher is really on the path to power the new space economy,” he says. 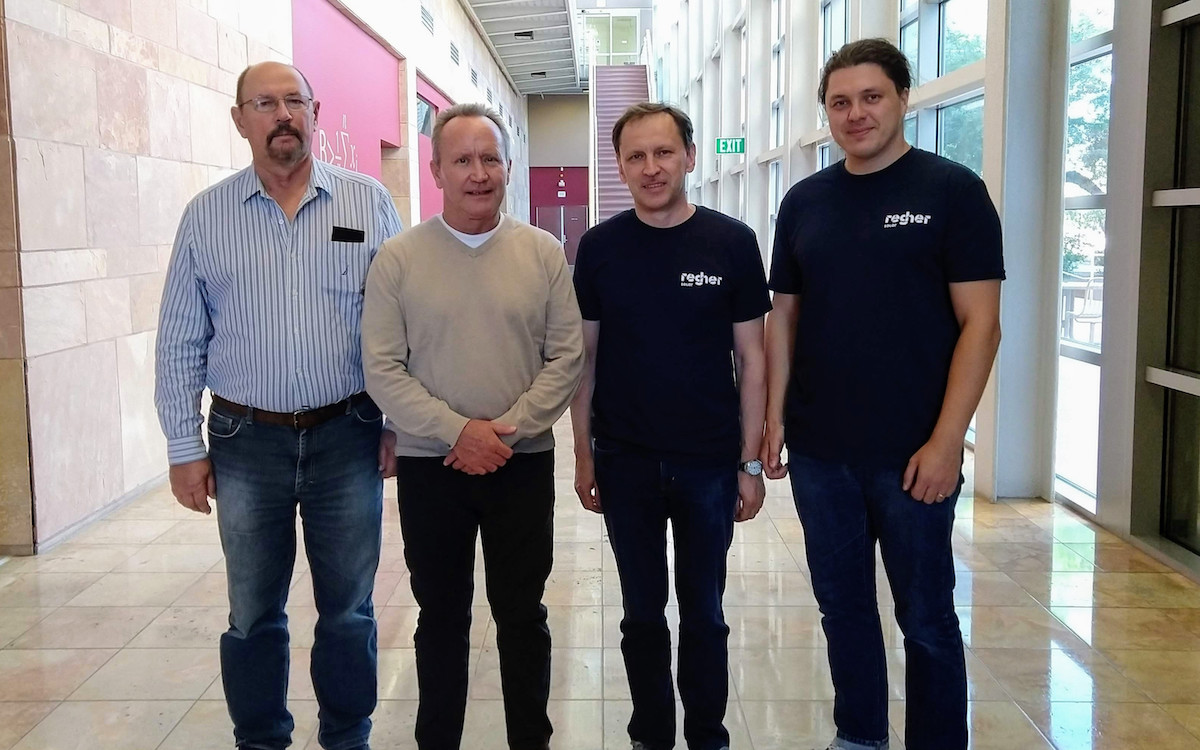 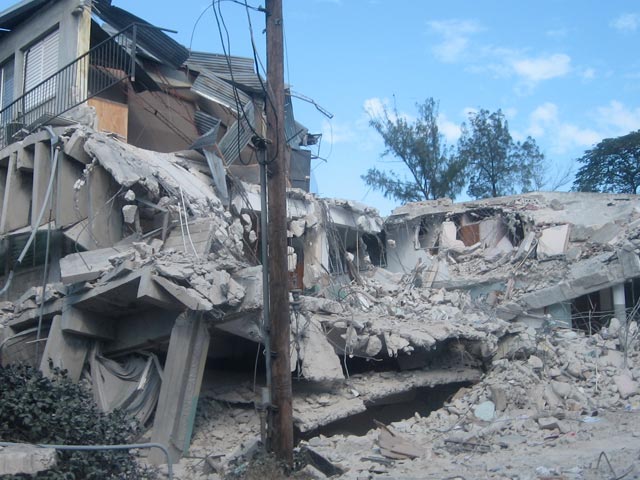 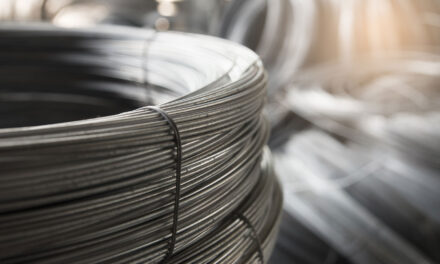 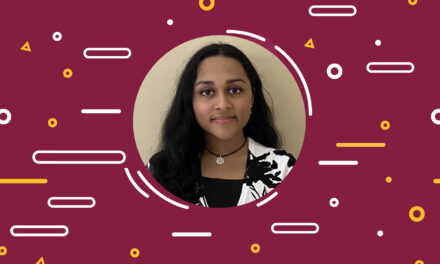 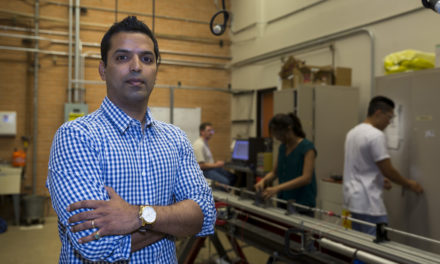