Stanislau "Stas" Herasimenka’s startup, Regher Solar, is developing solar cell technology that is cheaper and more resilient to the harsh environment of space More than a gigawatt of solar energy will be needed to power these activities, or the equivalent of 3.125 million photovoltaic panels. However, because it is currently the most expensive component on a satellite, scientists are looking for ways to make solar energy in space affordable — and to keep solar power systems from degrading so quickly in the extremely harsh environment of space. The Earth has two zones beyond its atmosphere called Van Allen belts that are created by the planet’s magnetic field. These zones trap radiation from solar wind and other cosmic rays and deflect it out into space. This same mechanism that defends Earth also harms the solar cells on satellites and other spacecraft as they leave Earth’s atmosphere. Regher Solar is using silicon heterojunction technology to build more durable, cost-efficient solar cells.

Exploring the next big thing in solar

A silicon heterojunction solar cell Herasimenka is developing with startup Regher Solar that could be used for terrestrial markets. This technology could increase solar cell efficiency from 21.5 percent to 23 to 24 percent efficiency while keeping manufacturing costs the same. Photo courtesy of Stanislau Herasimenka

Silicon heterojunction technology uses a low-temperature method to deposit layers of amorphous silicon with a high concentration of atomic hydrogen onto a crystalline silicon wafer. This method creates a solar cell that’s more efficient at converting sunlight into electricity than conventional solar cells, which are manufactured using standard high-temperature methods.

Pioneered in the 1990s, silicon heterojunction technology is not new, but it’s not widely used in the commercial solar energy industry. However, it holds great promise for the future of solar energy.

In conventional solar cells, the current manufacturing efficiency is up to 21.5 percent. Herasimenka believes silicon heterojunction solar cell technology can be manufactured to attain 23 to 24 percent efficiency without increasing the cost of production.

While that would seem to be a small step, it’s actually the next giant leap the solar power industry is looking to achieve. Seeing this as an opportunity to apply his graduate research, Herasimenka founded solar cell technology startup Regher Solar with solar industry expert Michael Reginevich.

Stuart Bowden, an associate research professor of electrical and energy engineering in the ASU Ira A. Fulton Schools of Engineering, praised Herasimenka’s work both as a doctoral student and a postdoctoral scholar to create commercial-grade silicon heterojunction solar technology.

“When I came to ASU in 2009, Stas was our first student to complete an experimental thesis, and his passion for solar was critical to kick-start the lab,” said Bowden, Herasimenka’s doctoral research advisor. “He did extensive theoretical modeling work but he was also the one who pushed on making his research commercial. Stas has really embraced the entrepreneurial spirit at ASU and it’s great he has the support to take his lab work out into the world.”

It’s very complicated for a novel solar technology to enter the market. The current cost of a commercial solar panel is about 30 cents per watt.

At this point in its development, silicon heterojunction solar cell technology is too expensive for the terrestrial market, but may be very attractive to aerospace companies.

The current leading technology of solar energy in space is in the form of tandem solar cells, which are more efficient than terrestrial solar cells (28 to 32 percent efficiency), but they cost orders of magnitude more at $100 to $500 per watt. In comparison, Regher Solar’s silicon heterojunction technology is a great deal at $1 per watt cost even with the loss of about 7 percent efficiency.

Not only is the price right, Herasimenka and his Regher Solar team have ideas in mind to make solar cells that are more resistant to the harsh environment of space that theoretically could also increase their end-of-life efficiency.

Their research caught the attention of Albuquerque, New Mexico-based SolAero Technologies and the Air Force Research Laboratory’s Small Business Innovation Research (SBIR) grant program, which seeks to fund technology to implement a space transport that could shuttle spacecraft from low Earth orbit to higher orbits. The area through which the transporter would operate is also where radiation is most damaging to spacecraft solar cells.

To address the unique challenges of providing reliable solar energy in space, Herasimenka is testing a hypothesis that Regher Solar can make silicon heterojunction solar cells extremely thin, which adds the benefit of radiation resistance.

Simulations conducted by Alex Fedoseyev — Regher Solar’s chief scientist for a previous NASA SBIR grant-funded project on which the ASU team was a subcontractor —  show that when a silicon solar cell is very thin, high-energy protons can go through the solar cell without damaging it.

“In some conditions, it may be practically transparent to high-energy particles,” Herasimenka said. “Besides, in a thin cell, electrons generated by light don’t have to travel as far to be extracted and even if space radiation creates a defect in a solar cell, electrons will have much less chance to recombine through this defect, thus, increasing end-of-life efficiency of a solar cell.”

While typical solar cells are 160 to 180 micrometers thick, Herasimenka and Regher Solar are targeting 50-micrometer or even 10-micrometer-thick solar cells.

Another feature of Regher Solar’s technology is its very low weight. Because every ounce increases the cost of a space launch, solar cells up to 15 times thinner would reduce space solar energy costs even more.

As part of the SBIR grant project, Regher Solar will work with SolAero Technologies to test solar cells of different thicknesses to find the optimum balance of thinness and durability against radiation.

If Regher Solar can pull it off, the company will be well on its way to helping the space economy meet its power needs.

A quest to impact the solar industry

Herasimenka came to ASU as a doctoral student when Bowden and Christiana Honsberg — now a professor of electrical engineering — joined ASU from the University of Delaware as ASU was beginning to launch its major solar energy initiative in 2009.

In 2011, the Quantum Energy and Sustainable Solar Technologies, or QESST, center was established, with Honsberg as its director, to address the “terawatt challenge” and develop advanced clean energy technologies to help raise the living standards of people around the globe living in energy poverty. It is a collaborative consortium of eight universities, more than 100 students and 30 faculty working with industry to find energy solutions.

“One out of five people in the world live in the dark due to the high cost of electricity,” Honsberg said. “QESST is focused on reducing solar costs while simultaneously improving its efficiency to the benefit of over 1 billion people living in the dark. Regher Solar is one of eight QESST spin-out companies making an impact in the market and we’re proud to have helped catalyze its formation.” 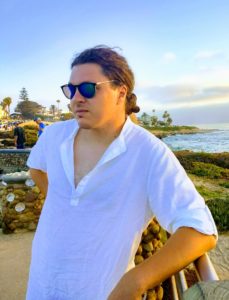 He co-founded Regher Solar with the help of QESST’s initiative to encourage and expose its students to innovation mentoring resources at ASU and beyond.

QESST Industry and Innovation Director John Mitchell helped Herasimenka develop his startup pitch and business plan as well as connect him with resources to help make his venture successful.

Mitchell said Herasimenka is “a perfect storm” for QESST and its innovation goals.

“Regher is developing intellectual property, transferring knowledge, bringing technology to the marketplace and giving back to QESST,” Mitchell said. “When we present to the National Science Foundation and the Department of Energy we talk about innovation in an abstract way. It’s great to be able to show specific and concrete examples such as Regher.”

Though being an entrepreneur wasn’t Herasimenka’s original career goal, it has turned into something he very much enjoys.

“Initially the company was founded to go for more [research grant] funding, but then, later on, I became more and more excited about the business world and got more deeply involved,” Herasimenka said. “Now I think that’s what I want to do in my life.” 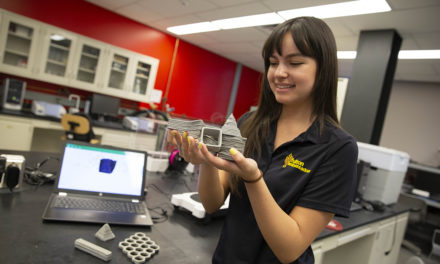 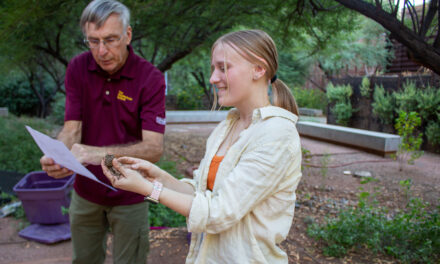 Empowering the environmental advocates of tomorrow 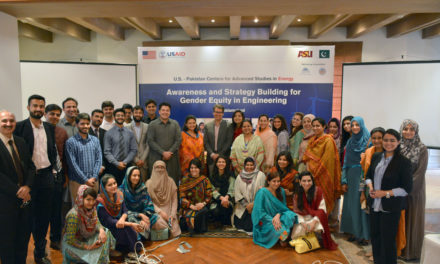 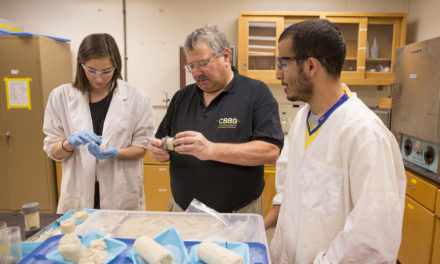