Above: Alexis Hocken performs mechanical testing with an Instron instrument used to investigate how much load the sample can handle before breakage. Photographer: Erika Gronek/ASU

Alexis Hocken did not have many female STEM role models to look up to growing up, so now she wants to fill that role for future generations of aspiring young scientists and engineers.

Hocken, a third-year chemical engineering major in the Ira A. Fulton Schools of Engineering at Arizona State University, is well on her way to making an impact on engineering research. She is the lead author of a paper published in a special issue of Industrial and Engineering Chemistry Research, a journal of the American Chemical Society.

Before she ever began her undergraduate career, Hocken knew she wanted to get involved in the biomedical field. By the spring semester of her first year, she’d joined the lab of Matthew D. Green, an assistant professor of chemical engineering.

“When I met with Dr. Green, the project he suggested seemed like such a perfect fit,” says Hocken. “From there, my interest in nanomaterials for biomedical applications really took off.”

Hocken worked on a research project with two master’s-level students for a little more than a semester before they both graduated, leaving her to lead her own project as just a second-year student. The project focused on copolymers, a combination of molecules formed by a chemical reaction to form a larger molecule with new properties. Polymers are everywhere from plastics to medicines.

“I really took it and ran with it, especially when Professor Green mentioned that he wanted to submit this project as his invited paper for Industrial and Engineering Chemistry Research’s special issue,” Hocken says.

Green, an expert in the design and synthesis of novel, ion-containing block copolymers, was recently named a member of the I&EC’s 2019 Class of Influential Researchers. Hocken worked with Green on one of his latest projects, which includes making photocured nanocomposites.

More specifically, the research involved investigating how the properties of varying amounts of nanoparticle additives could be used to prepare 3D hierarchical composites. One of Hocken’s interests is in the biomedical applications of the resulting composite material, which can be used in tissue engineering techniques to produce tailored cartilage or body tissue replacements.

“We can pick and choose the extent of the physical and mechanical properties that we want to implement into the material, depending on the needs of particular patients,” says Hocken. “We can use the information collected in this study to produce a composite with the loading of nanoparticles that corresponds to those desired qualities.” Alexis Hocken, shown in the lab holding a nanocomposite sample, took lead on a research project as a second-year student. Photographer: Erika Gronek/ASU

Hocken explains how the nanoparticles work:

“An analogy that I frequently use is pulling a tree out of the ground that has a lot of roots,” she says. “If rocks are interwoven between the roots, it is going to be significantly harder to pull out the tree than one with no rocks. The more rocks that are interwoven, the tougher the tree will be to pull out. In this case, the polymer is the tree roots and the silica nanoparticles are the rocks.”

“This material can be used to prepare 3D thermoset nanocomposites, wherein the nanoparticle and polymer mixture can be cured during printing using microstereolithography,” she says. “This allows for greater tunability within manufacturing and tissue engineering, producing materials that can be tailored to fit their specific functions.”

Hocken has also received funding from the ASU/NASA Space Grant program to continue her research. The next step for the project is to use nanoparticles that are functionalized. The nanoparticles will chemically react with the polymer resin to potentially create an even stronger network that can be utilized for tissue engineering and additive manufacturing.

In her recent journal publication, Hocken reported on her work to investigate “systems with inert nanoparticles that did not react with the polymer networks or the photoinitiator within the composite,” she says. “Now I am investigating the effects of implementing functionalized nanoparticles that will chemically react to see how this will alter the mechanical and physical properties of the nanocomposite.”

RISE-ing to a German summer challenge

Hocken’s love for research also extends abroad. She spent this past summer in Jena, Germany, participating in the DAAD Research Internships in Science and Engineering program. Called the RISE program, it allows students from English-speaking countries to live in Germany for a summer and conduct research alongside a German doctoral student. Hocken was selected to work in the Otto Schott Institute for Materials Research.

Those nanoparticles can then be used as drug vehicles within the body to deliver medication to specific organs. Different medications degrade at different rates and in different environments, requiring drug vehicles that match these medications’ specific degradation patterns.

“We worked to analyze these nanoparticles using various techniques,” says Hocken. “It will allow us to better pair medications with drug vehicles, the nanoparticles, derived from different concentrations of copolymer.”

In addition to her research, Hocken fully immersed herself in her new environment.

“During my 10 weeks abroad, I traveled to over 15 different German towns and cities to experience the various cultures across the country and to try the many, many delicious foods,” recalls Hocken.

“I also met many extraordinary people along the way,” she adds. “My labmates were so incredibly welcoming and supportive. Also, I was able to meet many other RISE interns, some of whom I have formed life-long friendships with. This experience was seriously so incredible, and I cannot think of a better way to have spent my summer.”

Back in Tempe, Hocken is currently a community assistant in Vista del Sol, an ASU residential community for upper-division students in ASU’s Barrett, The Honors College.

“I am the middle woman between my residents and the many resources that ASU has to offer,” says Hocken. “I love interacting with all of them and hearing about their individual endeavors. I enjoy giving them advice about topics ranging from deciding on career paths to telling them about my favorite places to study.”

When she’s not studying or in the lab, Hocken looks for ways to introduce the sciences to other curious minds. Beyond research, the ASU/NASA Space Grant program puts a huge focus on students performing education outreach — enabling Hocken to get involved in efforts to inspire future generations of young women.

“Outreach is something I am very passionate about, specifically with women in STEM,” says Hocken. “Being a part of this program allows me to be that role model for another young woman who may be struggling to find her way through the beginnings of her STEM career.” 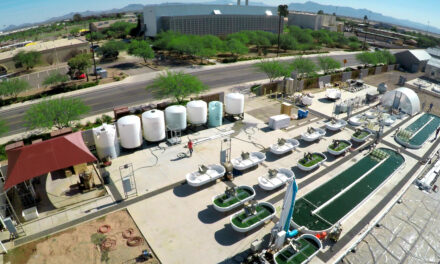 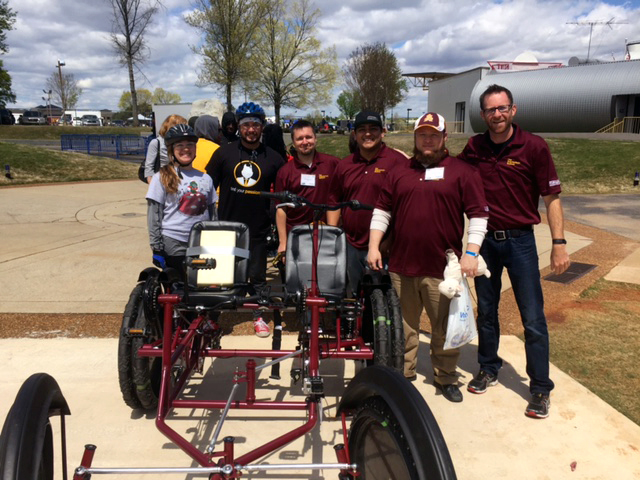 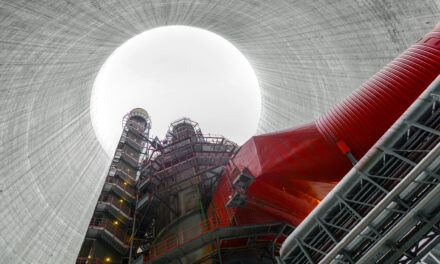