The Reno competition is a pressure-cooker, war-room experience in construction management that tests all the knowledge students have accumulated as well as their ability to perform quickly, in teams, under pressure and with ever-changing requests for proposals.

This year was the 28th Annual Student Competition held in Nevada by the Associated Schools of Construction, and you only need to say “Reno competition” for everyone in the industry to know what you’re talking about.

More than 1,200 students from 43 universities competed in the February event, the largest construction management competition in the United States.

Three of the nine Arizona State University teams from the Ira A. Fulton Schools of Engineering Del E. Webb School of Construction in the School of Sustainable Engineering and the Built Environment went through the fire and came out third in their categories, competing with teams from Stanford, Purdue and dozens of other top-ranked construction schools.

“It’s as real-world as it gets before you go start dealing with serious money,” said Wesley Parks, a senior in construction management, who helped organize all the teams and was a member of the heavy/civil team, which placed third. The other teams garnering third were design build and electrical.

The competition is based on projects taken from the real files of the company sponsors. Teams must come up with solutions in 16 hours and present their proposals to a panel of industry experts, including the company that constructed the real project.

“Students get an opportunity to use all the skills they have learned in the classroom in a competitive, real-life simulation of the types of things they will be doing when they graduate and join the workforce,” said faculty advisor Aaron Cohen, the Association of General Contractors lecturer in the Del E. Webb School of Construction, part of the Fulton Schools of Engineering.

Students also participate in a career fair on the last day that includes more than 80 companies.

“The industry representatives look very seriously at these students,” said associate professor Allan Chasey, program chair for the Del E. Webb School of Construction in the School of Sustainable Engineering and the Built Environment. “Participating in this competition is a real differentiator when students are interviewing. The industry understands what it takes. And if you have competed, and won, it really sets you apart.”

ASU was one of the founding members of the competition and has participated every year, Chasey said. This time, the Del E. Webb School of Construction sent 62 students in nine teams, one of the largest contingents in recent history. Many were first-timers who will be formidable veterans next year.

“We received a lot of industry support to send all of the students,” Chasey said. “The competition gives them a sense of the pressure that goes with the job, trying to understand the issues and coming up with a solution.”

Parks’ team moved all the beds out of its hotel room, set up desks, computers and printers for their “war room” and steeled themselves.

At 6 a.m., they received their problem from Kiewit: a road in San Luis Obispo County in California. It involved earthmoving, asphalt paving and some utilities. The complete bid package was due at 10 p.m., with multiple internal deadlines throughout the day.

“Pretty typical,” Parks said. “Except it was in metric units, (rather than U.S. customary units) which wasn’t fun.”

The team divided duties according to skill sets and got to work. Participants are not allowed to use cell phones or the Internet during the competition and cannot consult with anyone or ask others for help in any way, even sending someone on food runs.

“Everyone performed well,” Parks said. “We stayed on top of things, and never got into a bind for time.”

Then, about 15 hours later, just an hour before the deadline, Kiewit amended the project.

“Voices raised a little bit,” Parks said. “But we didn’t freak out. No punches were thrown.”

In another war room nearby, Jesse Pruitt and his design build team were working on a problem submitted by the McCarthy Building Companies: a partial demolition and design/build of a high school in Phoenix.

“The biggest issue for us is that you really can’t prepare for anything specific,” said Pruitt, a senior in construction management who is a recipient of the Beavers Heavy Construction Scholarship. “If you’re in heavy civil, you know you’re going to build a road or a bridge. You may not know where, but you know what.

“Last year, we designed a prison. This year, it was a high school. You’re sitting at the airport, waiting to fly, and you have no idea what you’ll be working on.”

Pruitt said judges expect the teams to act like professional construction companies, so they select members based on the skill sets for job roles that an actual company would need, including a project manager, an executive-level member to manage and sign contracts, a superintendent in charge of safety and scheduling, and a pre-construction manager.

“We hung signs and answered the phone with the name of our company,” Pruitt said. “The judges visit several times, unannounced, throughout the day to see how you’re doing, how you’re interacting, if there’s tension in the room.”

Pruitt said his team, which included an architecture student from ASU’s Herberger Institute for Design and the Arts, got along well, and still go out for beers together.

“But there were moments, just as in real life, where I, as the project manager, had to say no to some of the things the architect wanted,” Pruitt said. “He’s focused on aesthetics, and I’m focused on constructability.”

In yet another war room, Keithan Harris’ commercial team members were calling out the time to each other, watching the big clock they set in the middle of the room where everyone could see it.

They were working on a problem from Mortenson Construction: a military facility in Fort Carson, Colo., made of pre-cast concrete walls, with a directive to reach a LEED gold certification.

LEED, or Leadership in Energy and Environmental Design, is a system for measuring building sustainability, designed to reduce negative environmental impacts and increase profitability, health and well-being.  A building that earns 40-49 points is “certified,” 50-59 points earns a silver certification, 60-79 a gold, and 80 points and above a platinum.

Then, about three hours before the deadline, Mortenson told them to bump up the proposal to a platinum certification, which requires 10 to 15 additional points. They provided an additional $4 million in the budget.

“We decided to put solar panels across the roof,” Harris said.

The most challenging part for the team was putting nearly 200 tasks on a workable construction schedule that was a required part of the plan, he said.

In the end, the team missed third place by five points out of 1,000 and were only 10 points away from first place. The team received great scores on their printed proposal, but lost points on their oral presentation.

“Our estimates were within 1 percent of the actual cost of the project,” Harris said.

Afterward, Mortenson shared the real project plans with the teams.

“It was crazy,” Harris said. “They put the walls up first and poured the floors with a pump truck through the windows. It never occurred to us. I’d never seen anything like it before.”

Harris said that to prepare for the Reno competition, the teams met at least six hours a week from September to January and sometimes eight to 12 hours on the weekend.

“We went through old problems and worked on weaknesses of the team,” Harris said. “We set up luncheons with industry representatives to give mock presentations. We got to sit down with them to ask questions about things we were struggling with, and got to present to them in their offices.”

Parks said the preparations led to a job with Hunter Contracting Co.

“I first met people from Hunter as a sophomore, while working on preparation for Reno,” Parks said. “I met them again at the job fair in Reno last year and when we were preparing this year. I told them I was interested in the company, interviewed, and they offered me a job.”

Parks will be a project engineer and hopes to someday be a construction superintendent.

Pruitt also got a job, along with several other internship and job offers. He already is working with Okland Construction as an assistant superintendent on a small project, and will continue to work for the company after graduation. Okland, which employs several ASU alumni, is building the College Avenue Commons, the new home of the School of Sustainable Engineering and the Built Environment and the Del E. Webb School of Construction.

“I got recruited hard,” Pruitt said. “People are coming up offering you internships right after your presentation. I got an insane amount of job offers. I didn’t send my resumes out at all.

“I tell students all the time that it’s the greatest thing you can do, not just for the offers, but because you learn so much. I was able to sit in the room with the regional vice president of Balfour Beatty and go over what we needed to do to win the competition.

Cohen, the faculty advisor, encouraged students to participate, and directed them to Harris at keithan.harris@asu.edu for information.

“The Reno competition is a tremendously effective way for students to get a real-world type of experience in the field of construction while networking with the future leaders of our industry,” Cohen said. “Many companies attend this event for the sole purpose of recruiting the best of the best.”

Harris, a junior and recipient of the Ames Family Scholarship, said he will be back at Reno next year, looking for a trophy. After graduation, he wants to be a project engineer and eventually a project manager.

Parks said he wishes he had another year to compete. 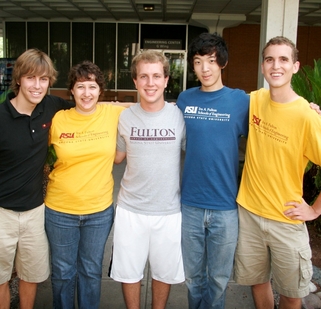 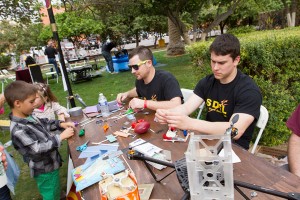