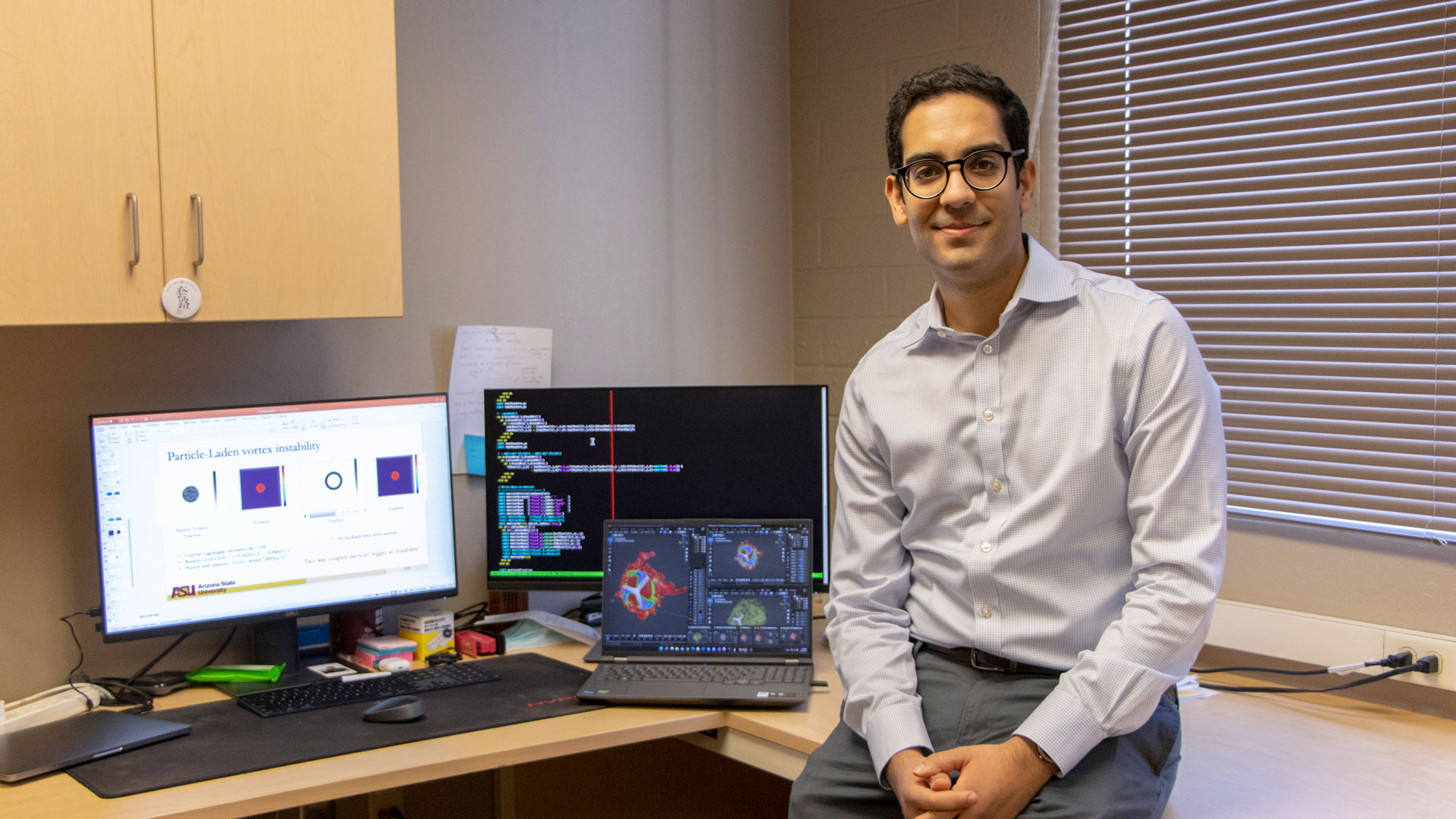 Mohamed Houssem Kasbaoui, an assistant professor of mechanical and aerospace engineering in the Ira A. Fulton Schools of Engineering at Arizona State University, is the first researcher to explore the dynamics of semi-dilute dusty flows, commonly seen in phenomena like dust devils. This work has many applications on Earth and in exploring other planets. Photographer: Monique Clement/ASU

For most people, dust is an annoyance. For Arizona State University researcher Mohamed Houssem Kasbaoui, however, dust is an opportunity to explore a new area of research.

The assistant professor of mechanical and aerospace engineering in the Ira A. Fulton Schools of Engineering at ASU is building a career as an expert in particle-laden flows. One focus of his research is investigating how tiny particles like dust and volcanic ash interact with swirling air patterns called vortices.

This common phenomenon is called a semi-dilute dusty flow. Even though most people don’t know it by this name, they’ve likely seen it in action as a dust devil.

Despite the fact that semi-dilute dusty flows are a common occurrence, scientists have a very limited understanding of the physics of their behavior. This lack of knowledge can have serious consequences for rotary aircraft such as helicopters landing in dusty conditions, aircraft exploring dusty planets like Mars, or in other conditions that involve swirling particles.

Supported by a three-year, $200,000 grant from the National Science Foundation, Kasbaoui is applying his expertise in particle-laden flows to lead his research team to be the first to take on the challenge of understanding semi-dilute dusty flows to fill a big large in scientific knowledge.

“We’re uniquely positioned to do that,” he says. “We’ve developed a lot of expertise in these flows.”

Kasbaoui says there are a couple of reasons why semi-dilute flows are poorly understood.

“The simple answer is that it’s hard,” he says.

The physics, equations and theories explaining the behavior of flows that are almost all air (dilute) or all particles (concentrated) are well known.

However, semi-dilute dusty flows — in which the mass of particles and air is roughly equal — are at the intersection of these two extremes. It’s uncharted territory involving entirely different physics; none of the established knowledge applies to understanding how the particles and flow will behave in semi-dilute conditions.

The processing power needed to do the calculations to understand semi-dilute dusty flows has also only recently become available through the use of modern supercomputers.

“A lot of the simulations we’re proposing would not have been feasible 10 years ago because we didn’t have the computing power to do it,” Kasbaoui says.

Now that the technology is catching up, he is leading his team to explore this new area of fluid dynamics. 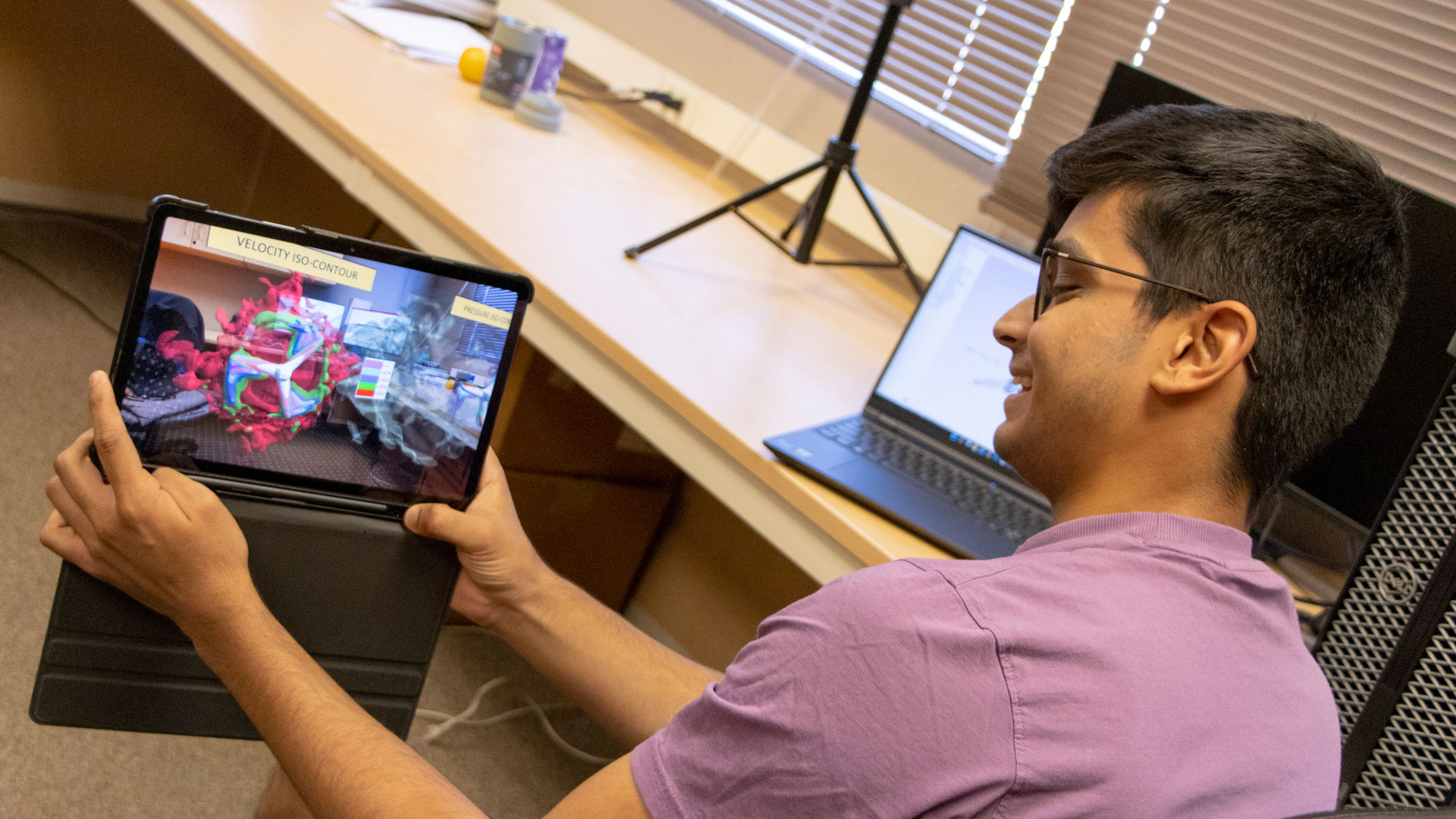 As part of another NSF-funded project in collaboration with Professor Marcus Hermann, Kasbaoui has conducted preliminary research to understand spherical particles and how they interact with each other.

“We’re developing algorithms that will allow us to represent the particles as literal spheres, and then calculate the flow around them as they move and bump into each other,” Kasbaoui says.

These spheres are a good base model to study dust at various scales, from a few thousand particles up to billions of particles. Advances in technology have made these visualizations possible, but the next step of developing computing models that include assorted particles remains a challenge.

Generating knowledge one step at a time

With a computational foundation in place, in the new NSF project Kasbaoui’s team is now investigating how particle behavior and swirling columns of air called vortices interact.

“It has been determined for over 100 years now that an isolated vortex tube is very stable. That means if you have a vortex, it wants to stay a vortex no matter how much you’re poking it,” Kasbaoui says.

“But what we’re finding with our preliminary simulation results and published work [outlining research results in vortex decay and instability simulations] is that if you add particles, then that vortex might actually break up on its own,” he says. “So, we’re asking, ‘What are the physics involved in the vortex collapsing?’”

Particles come in different sizes and densities, so Kasbaoui’s team is also investigating how those variations affect a vortex’s collapse, particularly when the quantity of particles and air approach equal mass.

“When the two weights are comparable, that’s when we start having a lot of interactions,” Kasbaoui says, noting that because air weighs so little it often doesn’t take many particles for them to reach equal mass. Quartz, or silica glass — which is what many grains of sand are made of — for example, is approximately 2,600 times denser than air.

The researchers will then apply the conclusions drawn from the equal mass simulations to an example of turbulent flows in which two or more vortices move around in a given space. The expected phenomenon in dilute and concentrated conditions is that two vortices will dance around each other and eventually merge.

“We are finding that the particles [in semi-dilute conditions] tend to actually slow down or inhibit that merger process,” Kasbaoui says. 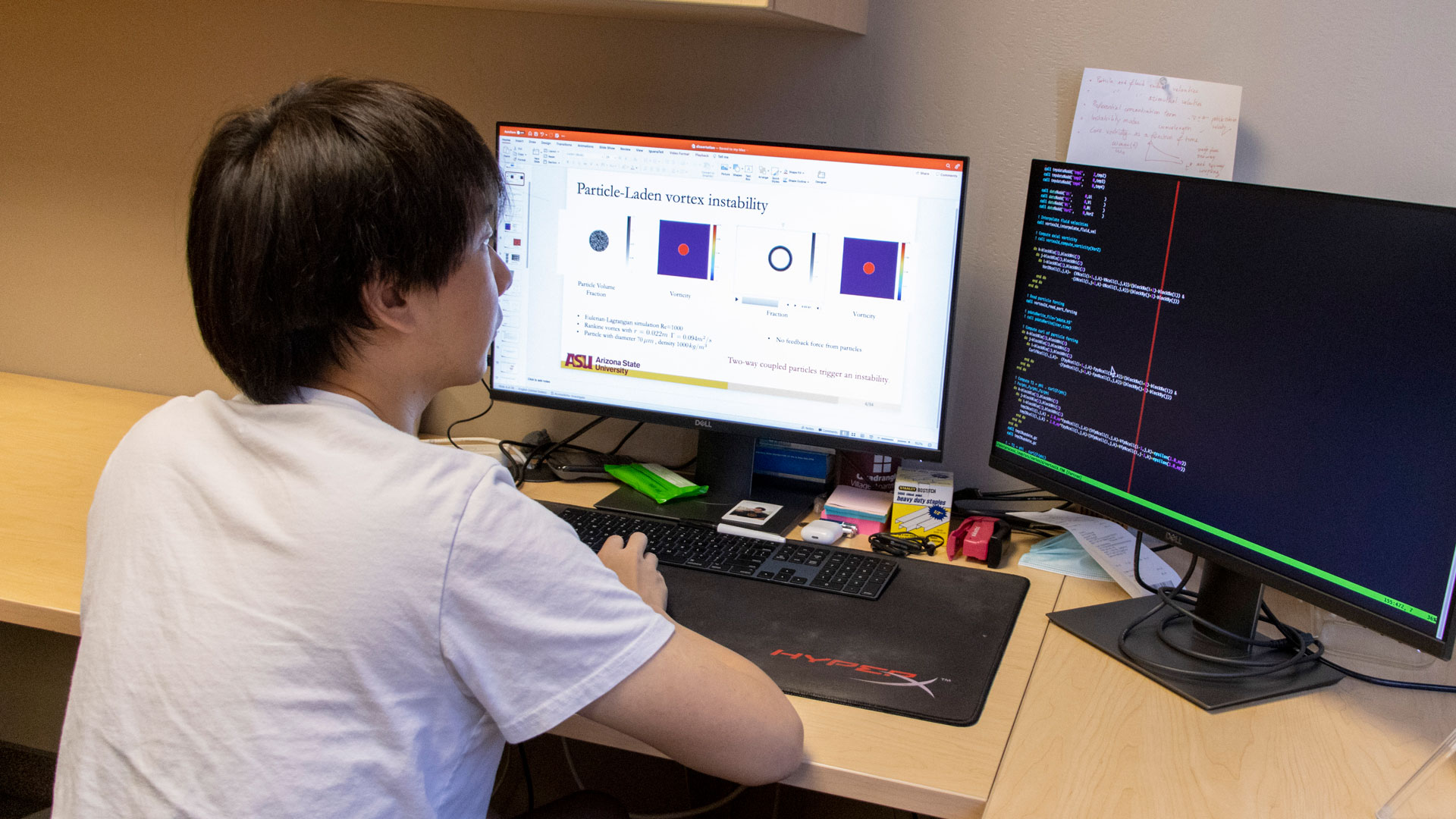 The right tools in the right hands

When tracking millions of tiny particles, it’s difficult to conduct practical experiments. So, much of Kasbaoui’s work is done numerically and with simulations.

“You need to have the right tools to be able to make any sort of progress in this field,” Kasbaoui says. “Numerical work is so hungry for computing power that we need big computers to make it work.”

Fortunately, Kasbaoui has access to ASU’s supercomputing capabilities. With unlimited access to a private part of the Agave supercomputer reserved specifically for their lab, the team can immediately run their own custom-made software and simulations. This prevents the need for the team to wait weeks in line for general use of the supercomputer or submit proposals to use resources at national laboratories.

When even the smallest, simplest 2D particle flow simulations take multiple days to run, this cuts down the time it takes for the team to accomplish their research goals.

By understanding how particles break up vortices or prevent them from merging, Kasbaoui says he hopes to model “brownout” conditions that can occur when helicopters and drones land in dusty conditions. One of his goals is to devise safer ways for aircraft to navigate these threatening conditions

He’s also inspired to contribute to applications beyond Earth. Kasbaoui cites NASA’s Ingenuity helicopter currently operating on Mars as an application for which understanding how dust and vortices interact can help scientists better design and carry out their missions.

Beyond simply modeling and understanding dusty conditions, Kasbaoui is looking into how to use particles to control various flows.

“If we can interrupt or disrupt some flow structures, then it gives us a new tool to do flow control, which is something that people have been trying to do for a very long time,” Kasbaoui says.

He is already applying some of this knowledge to research supported by the American Chemical Society Petroleum Research Fund. The project focuses on vortices that occur in oil and gas pipelines due to seams in the pipes. Vortices slow down the contents of the pipelines, meaning companies must use more energy to counteract the resulting friction to move the oil over vast distances. Adding polymer additives can reduce the friction by as much as 80%, but these additives degrade within a matter of minutes.

Kasbaoui investigated adding spherical particles, because spheres are more resilient than the long chains of polymers. However, he found that the particles don’t work as well in liquids as they do in gases.

So, his experiment to find effective particles to use in pipelines is still in progress, and it is only one of many potential applications for which Kasbaoui sees this knowledge being useful. He continues to explore areas of research that could lead to new theories and new scientific capabilities.

“I’m excited about our field and I feel passionate about the work we do,” Kasbaoui says. “I really want it to matter.”

An innovative approach to research

In addition to noticing the effects of semi-dilute particles in gaseous flows before any other research team, Arizona State University Assistant Professor Mohamed Houssem Kasbaoui’s approach to the research is unique.

Instead of focusing on either theory or experiments, the Kasbaoui Research Group uses a combination of theory and high-fidelity simulations.

“Once we have identified a parameter range where the dynamics are interesting and when we find interesting physics that people don’t know about, we do simulations to confirm the theoretical findings,” Kasbaoui says. “What we oftentimes find also is that, from simulation, we see something interesting and that raises new questions that we address with theory.”

His approach to research as an assistant professor is also different, but his innovative approach is supported at Arizona State University and by Lenore Dai, the director of the School for Engineering of Matter, Transport and Energy, part of the Ira A. Fulton Schools of Engineering at ASU in which Kasbaoui is a faculty member.

Kasbaoui often submits strong proposals for his own new research ideas as a principal investigator rather than following in the footsteps and research interests of more experienced professors. Through this approach, he has secured multiple grants during his nearly four years at ASU, distinguishing him as a promising new researcher in his field.

Scientific breakthroughs often require a team of bright minds, so Kasbaoui collaborates on these interesting new research ideas with ASU colleagues and with his team of students working in his lab. Kasbaoui’s students, including aerospace engineering undergraduate student Parin Trivedi and mechanical engineering doctoral student Shuai Shuai, have benefited from the opportunity to pioneer new areas of research alongside him. 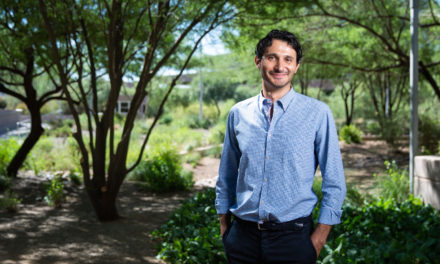 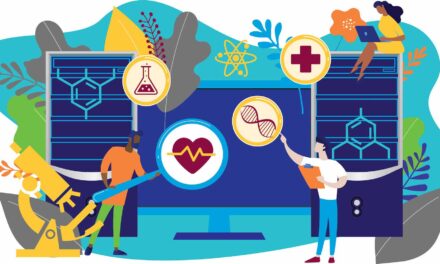 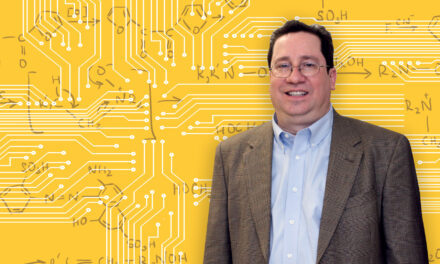 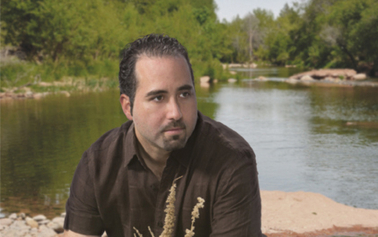