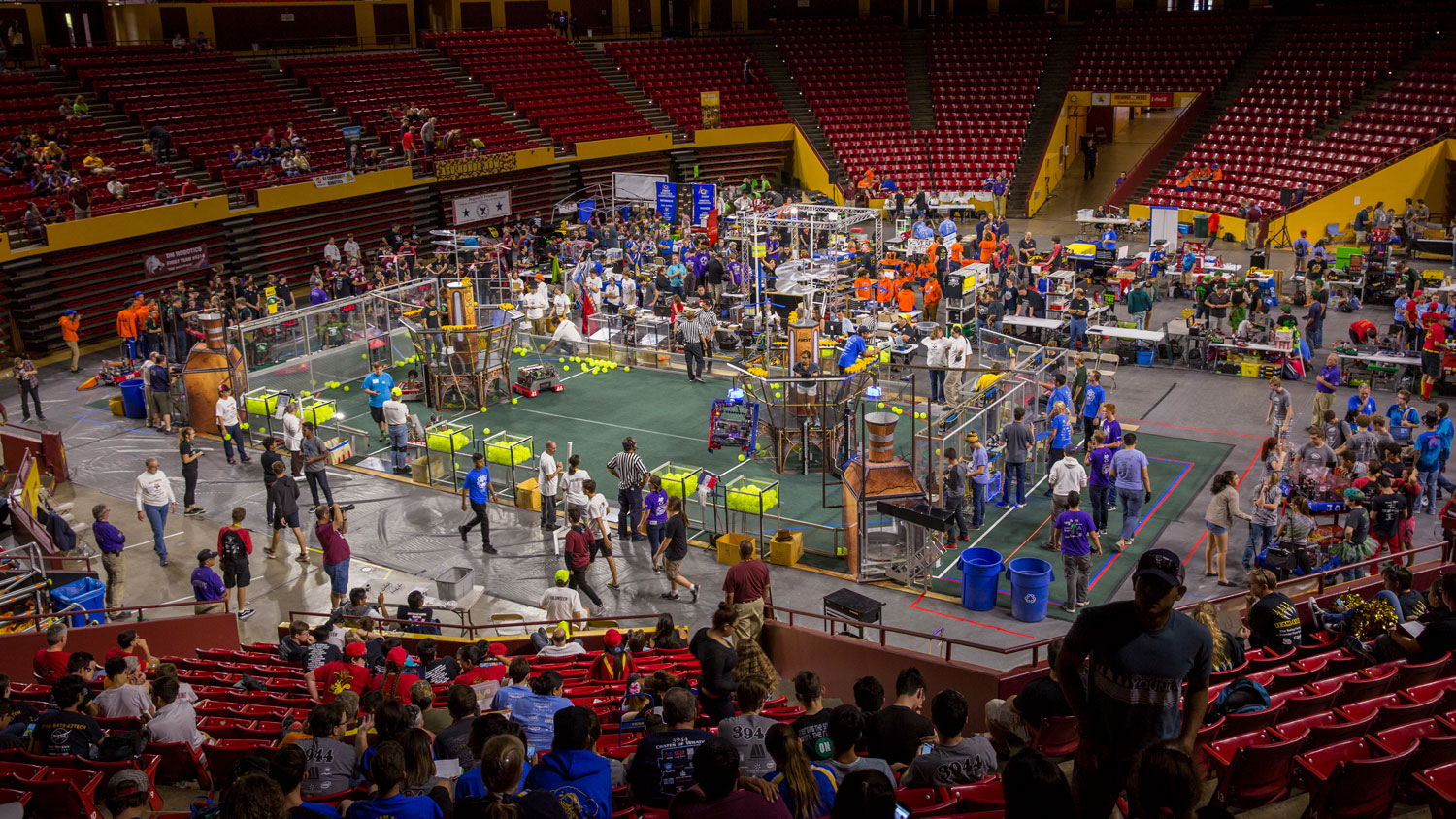 Arizona State University often hosts a number of traditional sporting competitions from football to swimming, but for the first time the university hosted the “ultimate sport of the mind” — the Arizona FIRST® Robotics Competition State Championship.

FRC challenges students to form a team, raise funds and hone a variety of technical, teamwork and other skills to build and program industrial-size robots over a six-week period.

After participating in regional competitions across the Southwest, the top 30 FRC teams comprised of more than 700 high school students from around the state converged at Wells Fargo Arena on Saturday, October 21. Student teams worked together in three-team alliances to solve the FIRST Steamworks challenge: gather “fuel” and gears needed to start an airship and then use deployed ropes for robots to pull themselves onboard. 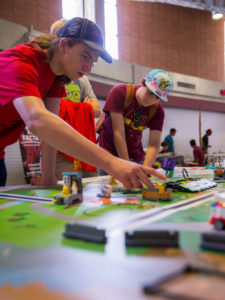 On the Wells Fargo Arena concourse, FIRST® LEGO® League, FIRST® LEGO® League Jr. and FIRST® Tech Challenge teams held demonstrations, showcasing the entire FIRST pathway from 1st grade FLL Jr. teams through high school FRC teams. The Ira A. Fulton Schools of Engineering and Access ASU were available to talk to students and parents about opportunities at ASU, and students were able to talk to college students and industry professionals.

Hosting the competition came out of a new partnership between the Fulton Schools, Access ASU and the Sanghi Family Foundation, and initiated by Steve Sanghi, chairman of the board, president and chief executive officer of Microchip Technology, Inc. and member of the FIRST board, and ASU President Michael Crow, who wanted to bring all the Arizona FRC teams and their friends and families together for the competition and to explore FIRST and STEM opportunities from kindergarten through high school in addition to college and industry careers in the state.

“As the Arizona partner for FLL and FLL Jr. this was a wonderful opportunity to continue the FIRST pathway and collaborate with FIRST at the high school level,” said Hope Parker, associate director of engineering K-12 outreach at the Fulton Schools. “It is so important for children of all ages and the community to see how they fit into opportunities like this and broader engineering.” 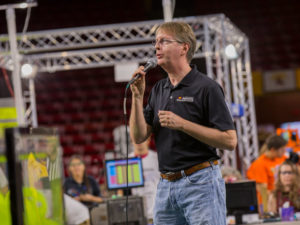 “FRC is such a unique event,” Squires said. “This event is fundamentally about innovation, problem solving, teamwork and creating future engineers.”

“There are so many creative and talented high school students in our local schools. FRC gives students an avenue to work as part of a team to develop their skills and aptitude in robotics,” Symonds said. “ASU is proud to partner with organizations like FRC to help students lay the foundation for their future pursuit of degrees and careers in STEM fields.” 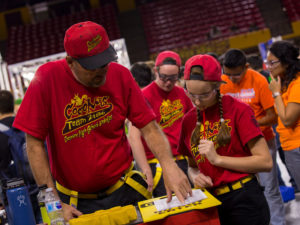 A mentor of the CocoNuts Robotics team from Coconino High School in Flagstaff, Arizona, guides his team at the FRC State Championship. Photographer: Jessica Hochreiter/ASU

Mentors are an important part of FIRST programs, and often include industry professionals volunteering their time as well as former FRC students now attending college.

“I was in the program in high school, so it was a natural move to join again,” said University of Arizona economics senior Shelby Anderson, a mentor of Team Crush from Sonoran Science Academy in Tucson, Arizona. “Most of the college mentors were on teams in high school.”

Sami Mian, a computer engineering graduate student at ASU and FRC mentor, says he learned a lot from his mentors while he was a high school student involved in FRC.

At ASU Mian founded a robotics club and has continued to get involved the FRC community throughout his undergraduate and graduate studies.

“I’m also giving back, and it helps me as a person because I love teaching,” Mian added. 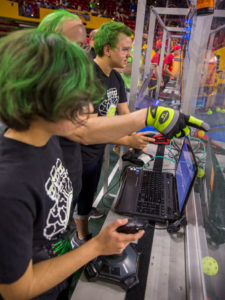 Students work together as part of a team in competitions and beyond. FIRST programs build skills beyond science and engineering — communication, teamwork, leadership, business and other skills are also essential to their success. Photographer: Jessica Hochreiter/ASU

Mentors teach students a whole variety of skills. The mission of FIRST is to foster well-rounded life capabilities that include self confidence, communication and leadership as well as science, engineering and technology skills.

Rich Simoncic, vice president of the analog division at Microchip Technology and mentor of the Wolfpack team from Desert Mountain High School in Scottsdale, Arizona, is in his 12th year as an FRC mentor. He said he enjoys teaching and coaching students in technical and other skills.

“The idea is to create great kids,” Simoncic said. “We teach leadership, business, entrepreneurship, being a team player and team leader, dealing with different personalities, technical skills and soft skills. We need smart kids who also have good people skills.” 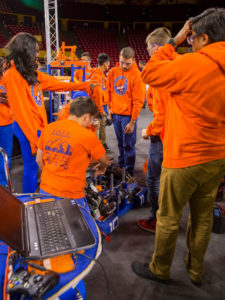 Teamwork among students in FRC is important to their success. In addition to working together as a team to build their robot in the allotted six-week design period of the competition, they must also work with other teams in alliances, with each team’s robot completing a different task, in order to win rounds in the competition.

The FRC State Championship doesn’t count toward qualifying for the final FRC World Championship round, but it still comes with bragging rights, and a banner and trophy to display at upcoming competitions. And after teams travel across their regions, states, countries and even around the world, they get to come home and compete against and work with local teams.

“The FRC State Championship is an opportunity for schools who have all done really well across [FRC] regionals to come together and compete with the best of the best in Arizona,” said Parker.

The Wolfpack and Team Crush have both competed at the FRC World Championship, but they were happy to compete with the best local teams at the Arizona FRC State Championship.

“Being at [the FRC World Championship] is a big deal,” said Andres Aviles, senior at Sonoran Science Academy, “but it’s cool to come back home and play with local teams and be a role model to everyone, help out and enjoy the company we have locally.” 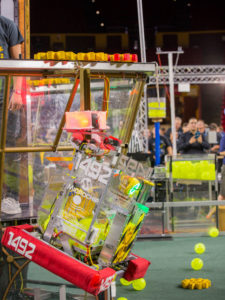 Team CAUTION’s robot hangs at the finish line of the round of competition. Photographer: Jessica Hochreiter/ASU 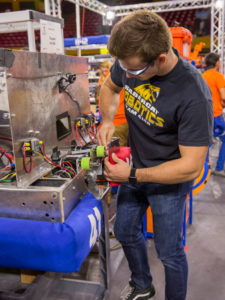 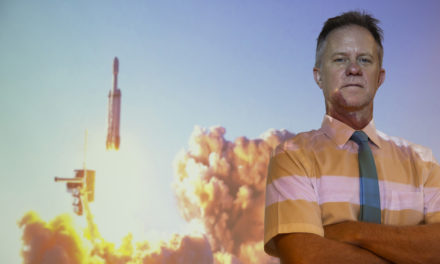 ASU engineer’s “rad” little board set to go to space 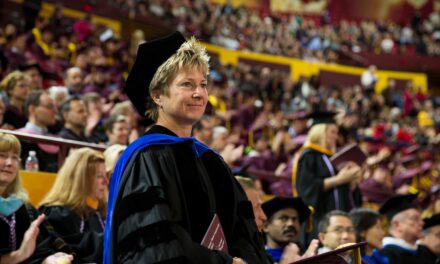 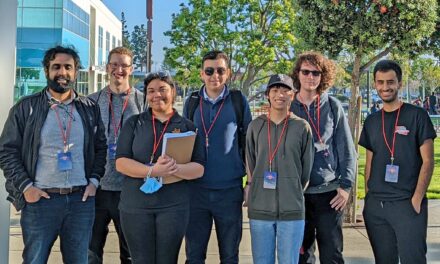 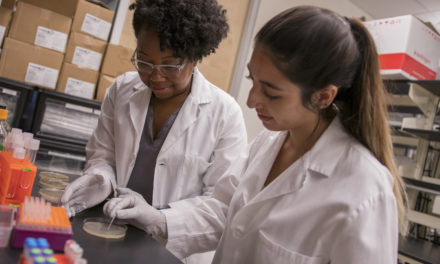