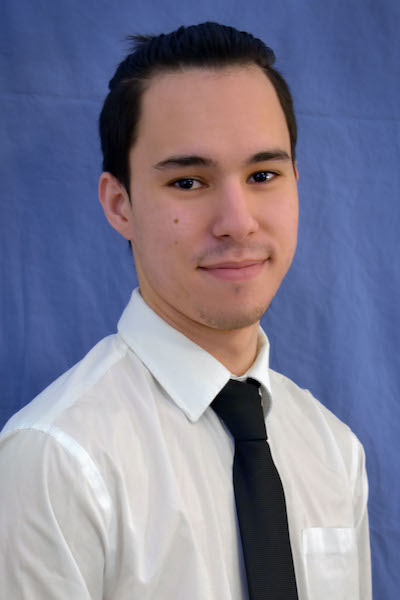 Once Zion Leonahenahe Basque applied his computer science knowledge from the classroom to applied cybersecurity research, he knew he was on the right path.

“Working on novel and impactful research made me realize that I wanted to stay in this field for the rest of my life,” Basque says.

Basque has spent most of his time at Arizona State University working in the Laboratory of Security Engineering for Future Computing, also known as SEFCOM. His first project there was to apply machine learning to the automated hacking process.

“It was really motivating to see how impressed my professors were when I completely explored a new domain in my field,” Basque says.

Since then he has worked on large government-funded grants and contributed to two papers submitted to top cybersecurity conferences.

He considers the SEFCOM lab team — Assistant Professors Yan Shoshitaishvili, Ruoyu “Fish” Wang and Youzhi “Tiffany” Bao, Associate Professor Adam Doupé and computer science doctoral student Erik Trickle — his “academic family.” Through their mentorship, Basque learned he could be a hacker who uses his skills for good, and even took a graduate course as a first-year student.

“They have changed who I am as a person. I am on a different path than before I met them, and I think it is one for the better,” Basque says. “Now, as a Native Hawaiian, I have prospects to get my doctorate in computer science. I can only thank them as my source of both inspiration and power.”

Basque is even co-captain of the “oldest hacking team in the United States” known as Shellphish — the same team Shoshitaisvhili and Wang competed on as graduate students at the University of California, Santa Barbara.

Just like the SEFCOM team helped him succeed, Basque hasn’t kept his skills and passion for cybersecurity all to himself.

He led the ASU hacking team called pwndevils as the club’s president. In that role, Basque led the team in international competitions and improved their rank from 50th to 10th in the world.

Basque also taught numerous undergraduate students through pwndevils lectures that covered topics usually only available to students in 400-level courses. He also created homework and other challenges for pwn.college, a cybersecurity education platform.

Long-term, Basque wants to continue to improve cybersecurity as a researcher or continue teaching as a professor of computer science, and maybe even win a prestigious National Science Foundation CAREER Award one day, like Doupé.

“Using the skills I’ve learned from my engineering experience,” he says, “I will help make the world a safer-cyber place.”