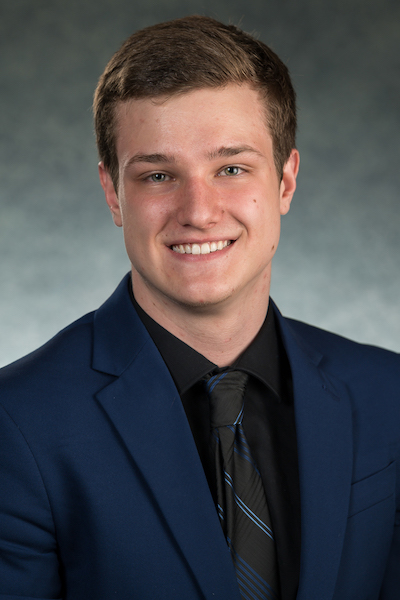 There were times early in his college years when Dylan Haftings says he “wasn’t really passionate about anything” and “wanted to stop trying.”

But through his own admittedly odd logic, Haftings came to the conclusion that even if he was not enthusiastic he should at least devote himself “to something that will help the environment and people.”

In other words, he found his passion.

At Arizona State University, Haftings says he has been “kept so enthralled by the classes, the community and the people I have met, that I am ecstatic every time I stop to think about where I am and what I’ve done. I found a group of people who are passionate about the environment and it swept me up in the best way.”

Not that it’s all been easy.

Haftings recalls many times “screeching for hours” when frustrated by failure to find solutions to engineering problems his studies presented.

He also found challenges in his leadership roles in student organizations.

In the end, surviving those trials under fire energized him.

His achievements include serving as an officer of the Fulton Schools Society of Water and Environmental Leaders, being a member of Tau Beta Pi, the premier engineering honor society, an undergraduate teaching assistant and tutor, a member of the Environmental Team for the ASU student chapter of the American Society of Civil Engineers, and a Platinum Member of the Fulton Academic Integrity Matters student program.

Haftings credits Fulton Schools Associate Professor Treavor Boyer for motivating him by showing the varied possibilities of a career as an environmental engineer.

“It was inspiring to see how much he cared about environmental engineering and how willing he was to go the extra mile and get the class excited,” Haftings says.

Haftings will have Boyer as his graduate studies mentor as he pursues a master’s degree in environmental engineering through the Fulton Schools 4+1 program.

He completes his undergraduate years having made the dean’s list every semester and earning support for his studies from a Pell Grant, a University Grant and a Carl L. and Jean Wolcott Meng Memorial Scholarship.

As for career aspirations, Haftings says it would be amazing to help repair damaged environments in places where people have not had the resources to protect their communities.