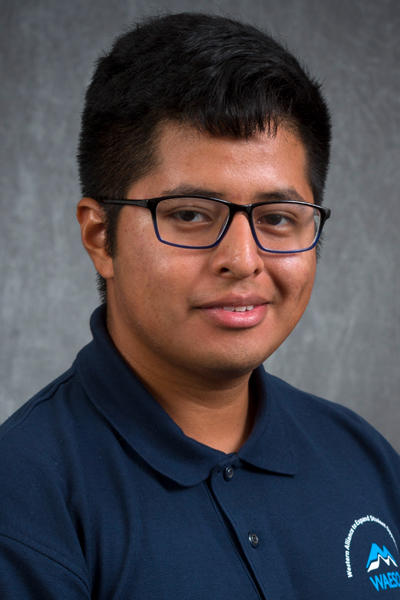 Cesar Carreto chose to pursue biomedical engineering at the Ira A. Fulton Schools of Engineering at Arizona State University to reach his goals of creating prosthetics and bringing science fiction into reality.

Carreto was a member of the Society for Advancement of Chicanos/Hispanics and Native Americans in Science, known as SACNAS, and the Arizona Global Health Project.

“I volunteered with SACNAS often, especially as part of Devils in Disguise,” Carreto says. “I volunteered whenever the Arizona Global Health Project hosted a volunteering event, notably with food banks. I also traveled with them to a pop-up clinic in Puerto Penasco, Mexico, as a medical translator.”

The Phoenix native also participated in the Fulton Undergraduate Research Initiative, or FURI, and the Western Alliance to Expand Student Opportunities, or WAESO, for his research into the feasibility of utilizing dielectric elastomer actuators in a prosthetic foot design.

“There are plenty of opportunities in research and development to gain experience that I didn’t think were available for an undergraduate,” Carreto says. “I felt that I got lucky since I was only a freshman entering a research lab. However, when I was awarded a FURI grant, that was when I realized ASU was right for me.”

He completed his FURI and WAESO research in the lab of former Fulton Schools Assistant Professor Jeffrey La Belle.

“Dr. La Belle pushed me to apply to FURI and WAESO that further enabled my undergraduate research,” Carreto says. “Even when he left ASU, he continued to provide advice and opportunities, which eventually led to my current career with ZBeats, Inc.”

After graduation, Carreto will continue working remotely at ZBeats as he stays in Arizona and considers a potential return to graduate school in the coming years.

“At first my career goal was just to build prosthetics,” Carreto says. “But after working at my current job, I figured it really doesn’t matter what project it is, as long as I get to design or prototype it. Seeing how I’m already doing that with my current career with ZBeats, I will stay with them and help grow the startup company as best I can.”