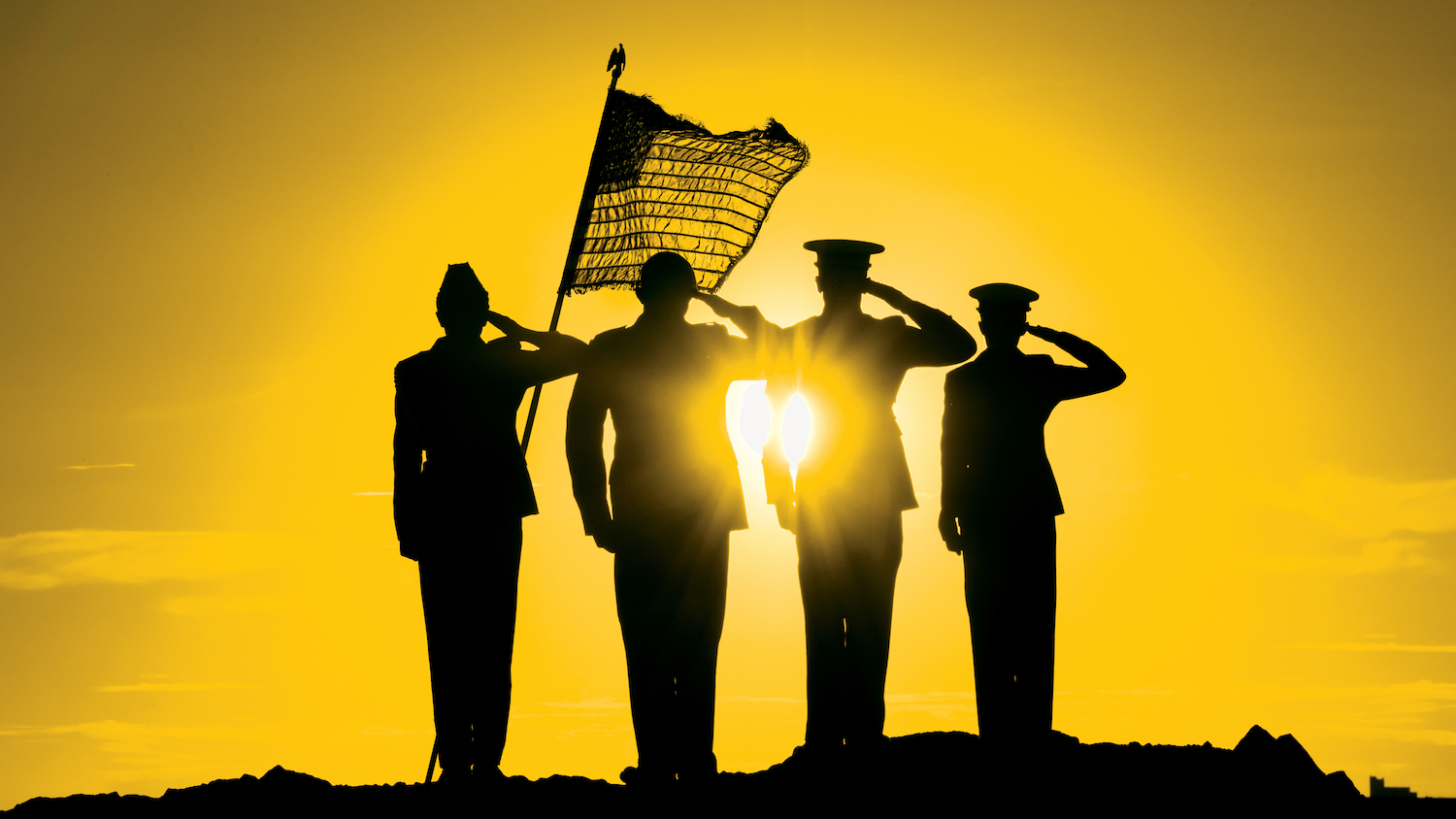 ASU has more than 7,000 veteran and active military students currently enrolled online and on campus, making ASU one of the largest universities per capita in the U.S. for students earning their degrees with GI Bill and Department of Defense tuition assistance benefits. The Ira A. Fulton Schools of Engineering at ASU has 1,826 student veterans enrolled this semester with 1,294 of those completing their degrees online. Student veterans account for more than 20 percent of all undergraduate students pursuing their degree online in the Fulton Schools.

“The Fulton Schools takes great pride in being able to provide every student veteran with access to quality engineering and technology education, whether studying in our digitally-immersed or fully-immersed environments,” says Kyle Squires, dean of the Ira A. Fulton Schools of Engineering. “We are grateful for their service to our country and want to empower the veteran community by enabling their academic and personal success here at ASU and beyond.”

A Fulton Schools computer science doctoral student was recently recognized as an exceptional student veteran leader. Vivin Paliath was named one of 60 national Tillman Scholars by the Pat Tillman Foundation this summer. The former logistics specialist in the Arizona Army National Guard plans to continue his service as a civilian by protecting computer networks. He currently builds software for a cybersecurity and threat intelligence startup company while he pursues his degree.

Read below about two other student veterans currently enrolled in the Fulton Schools. 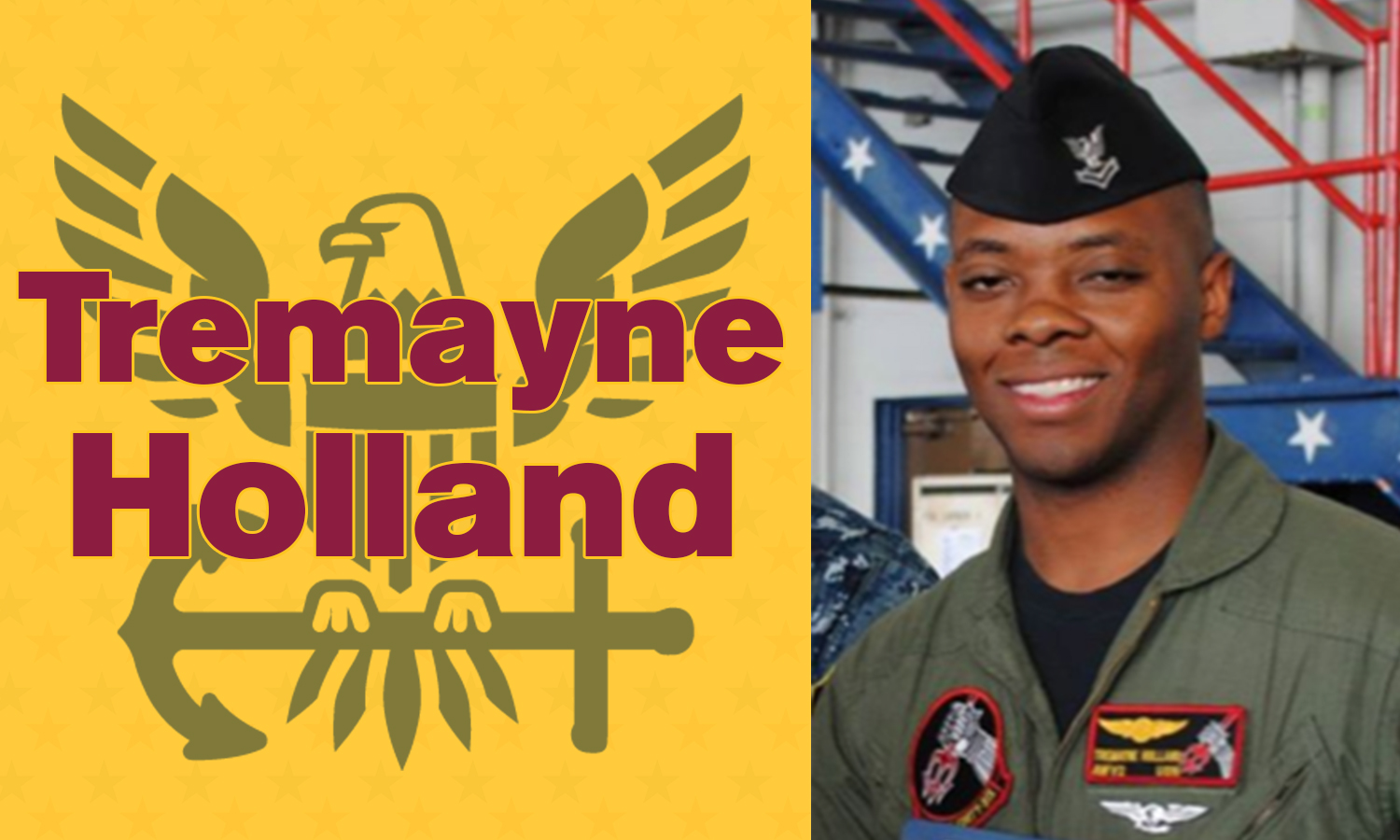 “We conducted anti-submarine warfare as well as intelligence, surveillance and reconnaissance missions,” says Holland. “I served for six years and completed three, eight-month deployments. I was also the ordnance qualified crewmember onboard.”

Holland chose to attend ASU after deciding to get out of the military.

“After doing research, I discovered that ASU was one of the top military-friendly schools,” Holland says. “I became interested in [unmanned aerial systems] while in the military but was unable to find a job dealing with unmanned aerial vehicle operations in the military. I discovered that ASU had a program that centered around UAS. My wife and I were also fed up with the cold and rainy weather in the Pacific Northwest.”

The veteran community at ASU helped Holland with his decision to attend ASU. He attended the student veteran welcome event during his first semester on campus and it helped reassure him he’d made the correct decision.

“My first semester back in school after I got out of the military was a little hard,” Holland recalls. “It had been almost 10 years since my last in-seat college class. I also felt as if I couldn’t really communicate with anyone because all that I knew at the time was military lingo.”

The Pat Tillman Veterans Center helped Holland adjust in his return to college life after his academic hiatus.

Then in 2007, Holland was drafted by the Los Angeles Angels of Anaheim in the 20th round the Major League Baseball amateur draft to start of his professional baseball career. He played in the minor leagues until being sidelined by a shoulder injury.

“After my rehab stint I pretty much gave up on baseball,” says Holland. “Getting hurt kind of ruined the thrill for me and I returned home until I joined the Navy.”

After exciting careers in baseball and the Navy, Holland eventually found himself at home on ASU’s Polytechnic campus.

“Fortunately, I discovered the Pat Tillman Veterans Center. Realizing that there were other veterans on campus who had been through the same exact thing helped me tremendously,” shares Holland. “I was able to utilize the resources that we have available to us and it helped set me up on my path to success. Two years later, I am making plans for graduation.”

The Claxton, Georgia, native didn’t want to lose the aviation experience that he had gained in the military, so he wanted to pursue engineering and aeronautical management technology as his major in the Fulton Schools.

“I fell in love with unmanned aerial systems during a joint operation that we conducted with a UAV squadron,” says Holland. “Seeing the capabilities that these aircraft possessed drew me in and I knew then that I wanted to be a part of the UAS community.”

The Pat Tillman Veterans Center didn’t just help Holland readjust to campus life, it gave him an opportunity to give back. Holland works as a military outreach team member in the center.

“For me, working at the center brought back a sense of camaraderie that I had with my fellow service members while I was still serving during active duty,” Holland says. “It also allows me to give back and provide a service to another fellow veteran who may be in the same boat that I was in during my first semester here at ASU.”

The legend of Pat Tillman resonates all across ASU and the legacy of his life and principles live on through ASU’s active military, veteran and dependent students, whether they are on campus or online.

“The Pat Tillman Veterans Center has your back,” Holland states. “We are constantly reaching out and engaging student veterans no matter if they are newly transitioning or have been out of the military for a while, everyone is treated the same. The environment here at ASU is one of positivity and for me, and my experience here feels more like a community than a school.”

Holland appreciates all of the support he has received in his journey.

“The most rewarding thing for me would have to be the connections that I have made throughout the Ira A. Fulton Schools of Engineering,” Holland says. “The knowledge gained and skills that I have acquired have helped enhance what I already knew from my experience in the military.”

Holland concludes, “I owe all of my success to my family for their support, ASU for providing the resources needed to help set students up for success and the military for instilling discipline and structure into my life.” 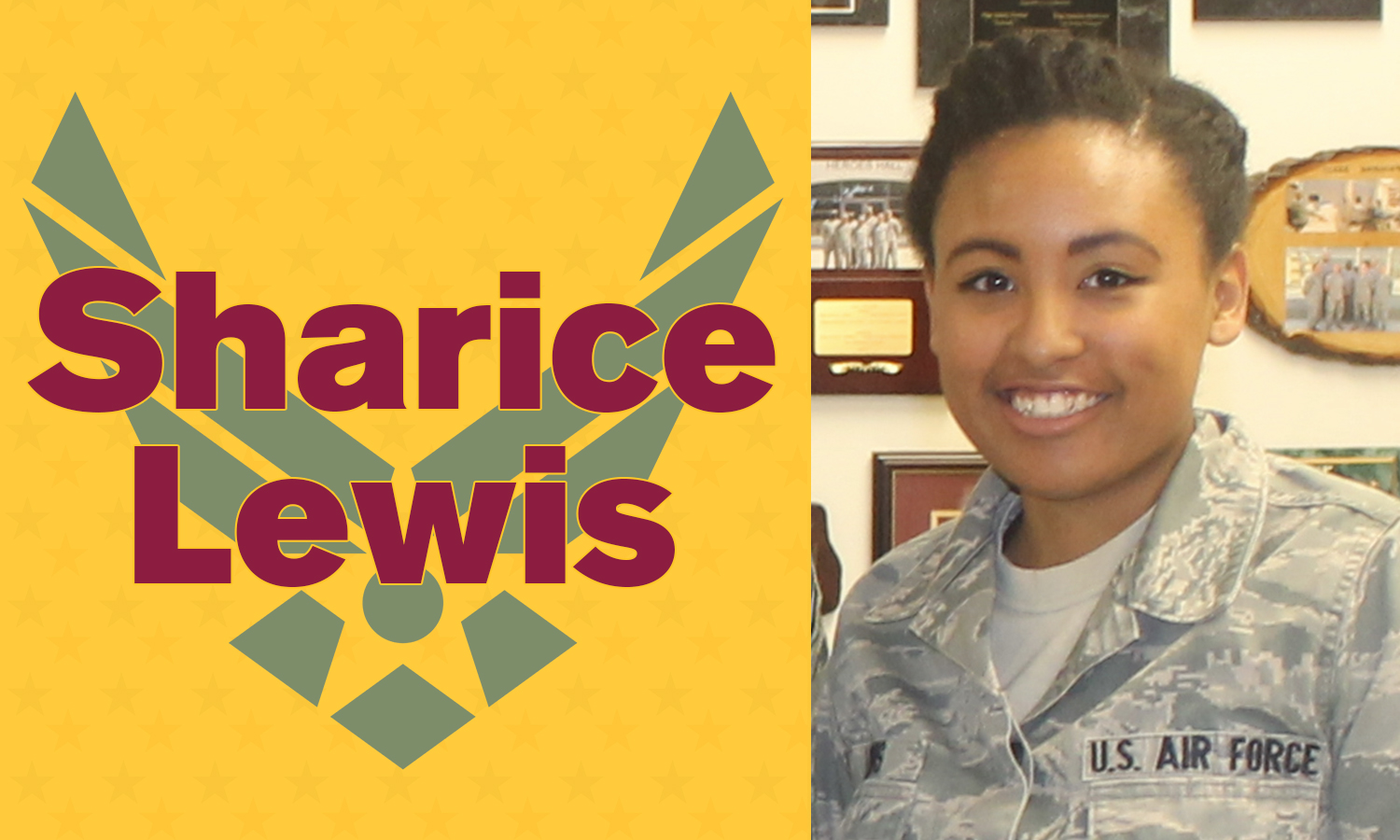 Sharice Lewis, an engineering management major pursuing her degree online while living in the Atlanta suburb of Alpharetta, Georgia, served in the United States Air Force for more than six years in diagnostic imaging starting a year after graduating from high school.

“I had no idea what I wanted to go to school for and I really wanted to be independent of my parents,” says Lewis. “Although a lot of times I felt like I could not wait to get out of the military so I could do what I wanted, as I grew up I became very thankful for opportunities that would have been impossible for me to receive as a civilian.”

When she first joined the Air Force, Lewis admits that she was immature and didn’t know how to properly deal with conflict and adversity.

“I learned the importance of not only having a good mentor but being a great mentor,” Lewis recalls. “It really is about embodying the change you want to see and reaching back to help those after you.”

Lewis’ husband is a fellow veteran who attended college in Mississippi and had a less than stellar experience as a veteran, so she was impressed by the support that ASU offers veterans through the Pat Tillman Veterans Center.

“I chose ASU because it was one of a few schools to offer engineering management as an undergraduate degree and is ABET-accredited,” says Lewis. “When I initially applied, I was still in the military and stationed at Luke Air Force Base. The staff at the Tillman Center made the process very easy and painless.”

A strategic planning board meeting while serving at the clinic on Luke Air Force Base near Glendale, Arizona, helped instigate Lewis’ interest in engineering management.

“The meeting was facilitated by a civilian who I spoke with during one of the breaks, and he explained his educational and training background. I was fascinated and spent about a month researching what engineering management was, the applications of the degree and, of course, the pay. The next semester I enrolled at ASU.”

The Tillman Center didn’t just help Lewis get to ASU, it helped her obtain an experience she says has been the most rewarding part of her studies: a Focus Forward Fellowship from the Military Family Research Institute at Purdue University. She is one of 20 students nationally selected for the 2018 program.

The fellowship is a yearlong process that started this past summer. In July, during the residency portion of the fellowship, Lewis had the opportunity to visit Purdue University.

“The MFRI staff coordinated fantastic guest speakers to lead us in different training and exercises,” Lewis says of her time in Indiana. “We participated in a wide array of activities and one of the most amazing things they did was hand pick a corporate or academic mentor for each of us.”

During the residency, she learned about her strengths in a work setting and about her personality type in professional dynamics. Many of the activities did not only focus on teaching participants about themselves, but rather how they fit into professional settings and how to cope with different personality types and resolve conflicts to become great leaders.

With the residency portion of the fellowship now complete, Lewis has a yearlong follow up through the MFRI online community.

“It allows for us to ask for help with everything from grad school applications to business card ideas,” says Lewis. “They provide information for navigating academia as female veterans or just to connect with each other. I got to learn a great deal of practical knowledge that helped me develop as a person, and I made real connections with a great group of empowering women.”

Lewis wants to continue her education once she graduates, but she isn’t sure what path she wants to follow.

“I am currently contemplating whether to continue in the engineering sciences or pursue business organization,” says Lewis. “My long-term career goal is to have a network of nonprofits that focus on removing barriers to equity for the impoverished and oppressed on a global scale.”

Lewis isn’t just focused on her own future. She has her sights set doing meaningful work and helping communities around the world.

“I would love to be a part of a pivotal advancement that helps close the gender education gap and access to clean water,” says Lewis. “Any project that helps move us closer to solving the Millennium Development Goals set by the UN would be fulfilling.”

Studying in the Fulton Schools and participating as an MFRI scholar is moving Lewis closer to her goals.

“My dream is to live a comfortable life that allows me to focus on my philanthropic efforts to move our global community closer to a more sustainable and equitable future,” Lewis states. “At the end of the day, I want to be a role model for my daughter and teach her the value of taking actionable steps to make a change.“

Learn how you can make a difference 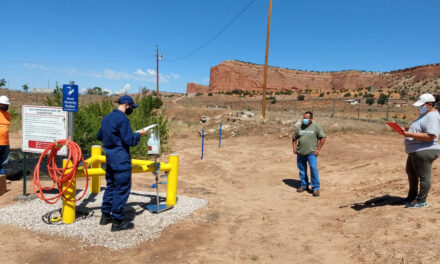 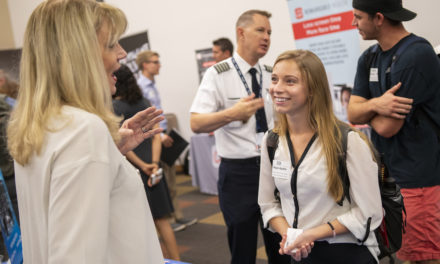 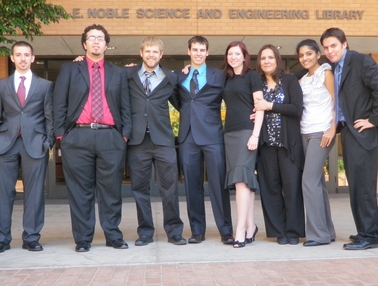