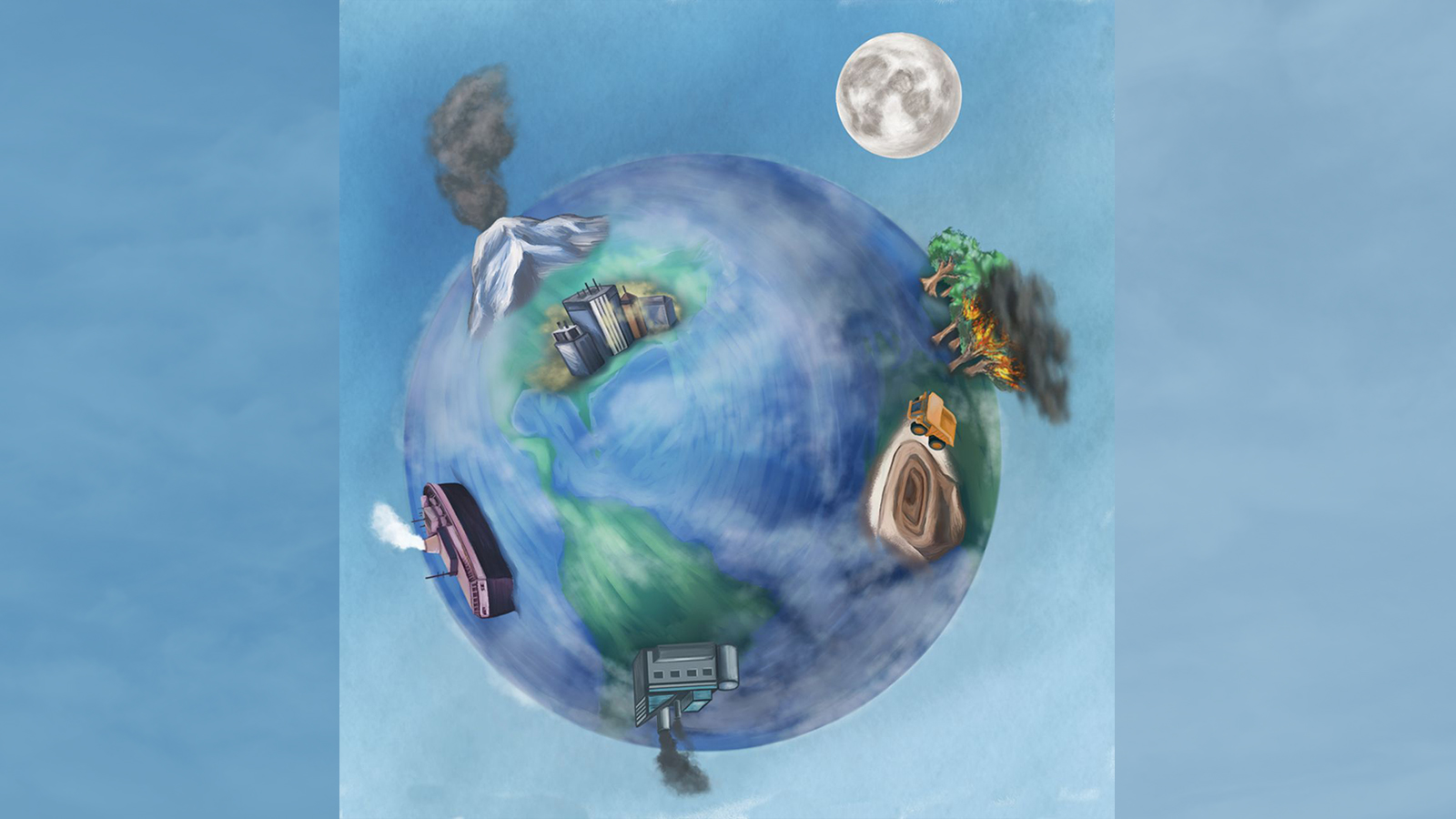 Above: In addition to an immense number of natural nanomaterials moving around the Earth, there are more and more incidental nanomaterials — those created by human activities such as factory and transportation emissions, mining and forest fires — as well as engineered nanomaterials that make their way into the environment primarily through wastewater treatment plants, holding ponds and landfills. Together these materials have impacts across the entire planet. Illustration: Rose Perry/Pacific Northwest National Laboratory Creative Services

Nanomaterials are a prime example of how extremely small components of matter can make sizable impacts.

Materials smaller than 100 nanometers are the tiniest components in the world — the width of a single human hair is about 60,000 to 100,000 nanometers wide. Yet cumulatively nanomaterials form critical parts of the atomic and molecular architecture that shapes Earth and the life on it.

Learning how nanomaterials act and react is fundamental to understanding how nature and the world work on a global scale, as well as at the most minuscule levels.

Natural nanomaterials are made by nature through (bio)geothermal or mechanical processes without any connection to human activity. Engineered nanomaterials, on the other hand, have been conceived, designed and intentionally produced by humans. Only in the past 20 years have the impacts of nanomaterials on Earth systems been studied extensively.

An article in a recent issue of Science magazine, co-authored by 15 accomplished environmental and chemical engineers, geologists, oceanographers and soil chemists, details how research and technological advances are deepening knowledge of the nano realm.

These new insights promise to open pathways for employing engineered nanomaterials to improve myriad aspects of life, says Paul Westerhoff, a Regents’ Professor holding the Fulton Chair of Environmental Engineering in the Ira A. Fulton Schools of Engineering at Arizona State University, and one of the article’s co-authors.

Through his work, Westerhoff has helped to develop new tools and methods to reveal how certain nanomaterials affect ecosystems and drinking water.

“We are able to know where to look for different kinds of nanoparticles in the environment, we know how to more accurately measure them,” he says, “and we can see how significant they are in controlling various natural processes.”

Westerhoff emphasizes how those advanced analytical abilities are accelerating understanding of interconnections between the generation and transport of natural, incidental and engineered nanomaterials — progress that is providing guideposts for engineering nanomaterials that can benefit society.

Analogs to natural nanomaterials are already being engineered to boost the effectiveness of numerous consumer products and some industrial processes, including technologies to help purify drinking water, notes Hochella, a University Distinguished Professor Emeritus at Virginia Tech and the initiator and lead author of the Science magazine article. 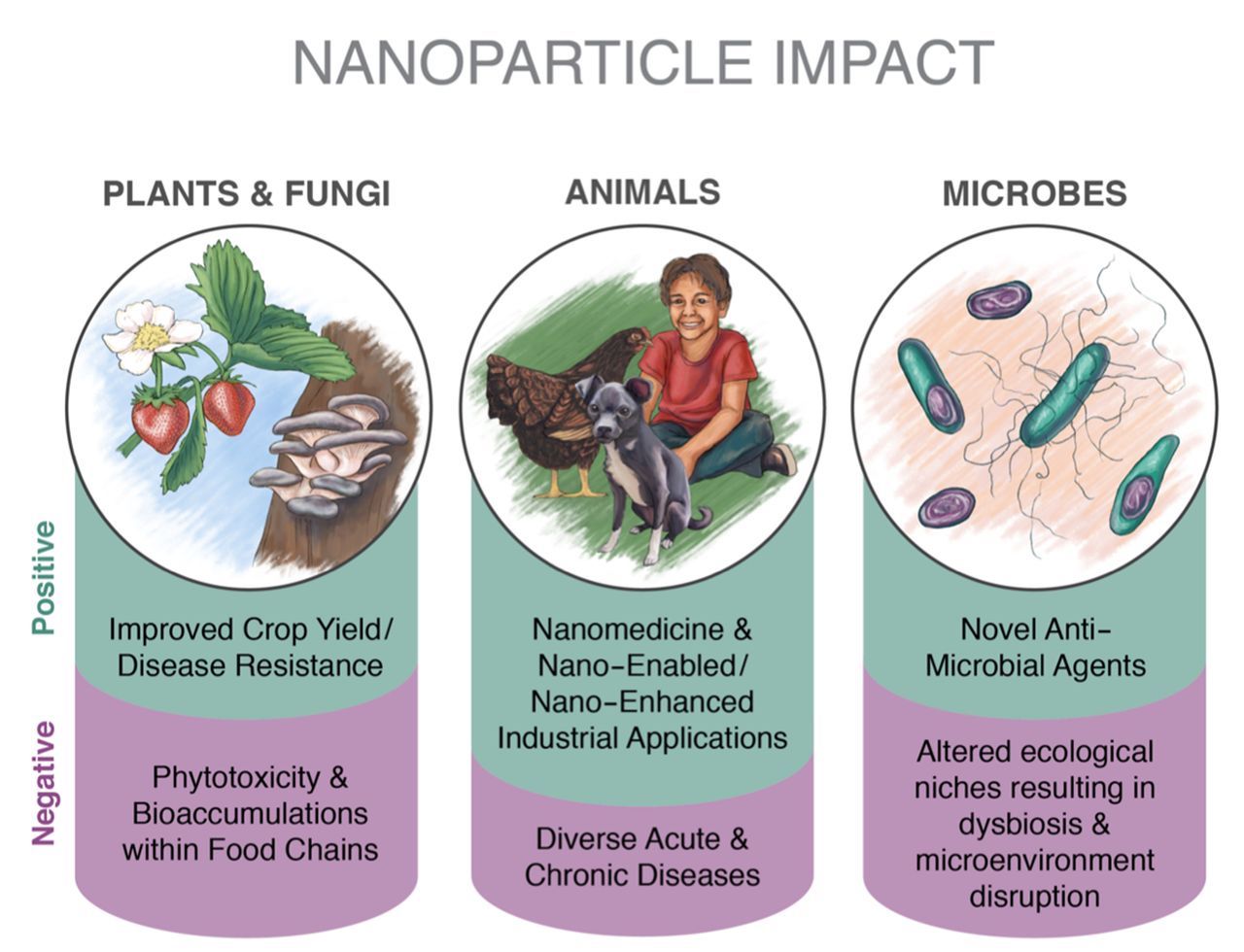 Anthropogenic and natural nanomaterials enter biological systems across the tree of life through multiple routes, where they have broad positive and negative impacts. These impacts are driven by multiple factors, including the dose, duration, number of exposures and the characteristics of the nanomaterial. Many nanomaterials have beneficial effects or are harmless. In cases of detrimental properties, however, studies can produce useful risk assessments and development of preventive measures to ensure biological safety. Illustration: Rose Perry/Pacific Northwest National Laboratory Creative Services

“The field has advanced so tremendously in the past decade that it was time for a declarative statement about all the ramifications of these accumulating insights about nanomaterials,” Hochella says of his motivation to propose the article to the publication’s editors.

He enlisted co-authors with expertise in working with nanomaterials in not only environmental science but soil, ocean and atmospheric sciences, health sciences, geochemistry, contaminant science and “the vast mega-field” of environmental engineering.

In Westerhoff, he had “an international-class expert” in environmental engineering and contaminant science.

“He is so well-known and so broad in his thinking, he was perfect for this effort,” Hochella says. 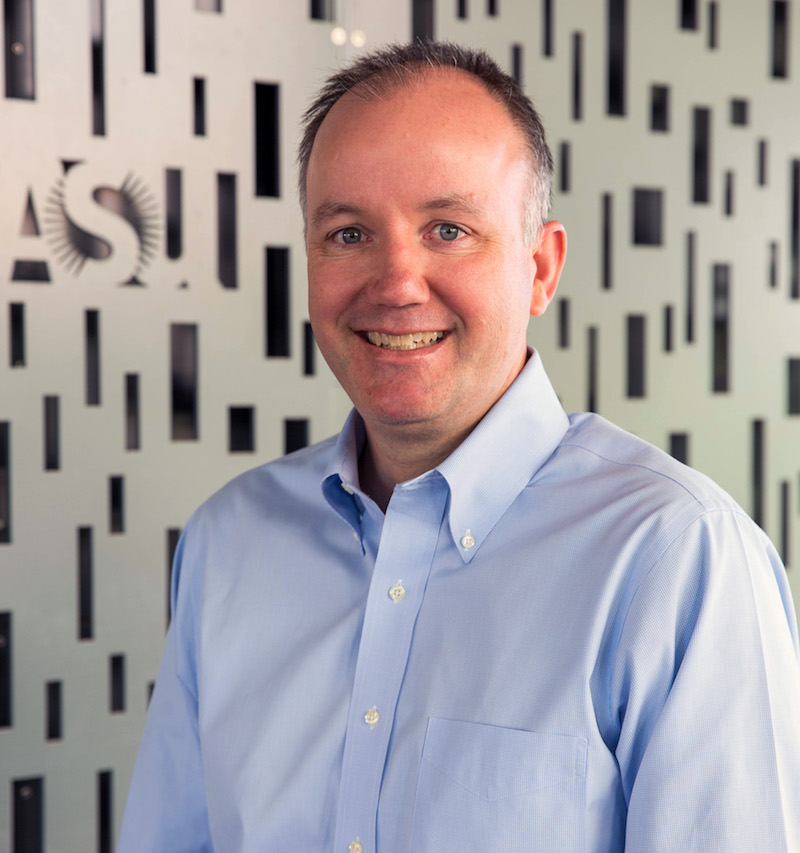 ASU Regents’ Professor Paul Westerhoff, holder of the Fulton Chair of Environmental Engineering, has been given some of the most prestigious awards for environment and ecology studies and research that includes extensive work on understanding the impacts of nanomaterials.

Westerhoff, who teaches in the School of Sustainable Engineering and the Built Environment, one of the six Fulton Schools, began getting heavily involved in nanomaterials research in 2005.

His work has earned support from the U.S. Environmental Protection Agency, the Department of Energy and the National Science Foundation and from industry groups such as the Semiconductor Research Corporation, individual companies, the Water Research Foundation and other nongovernmental organizations.

Westerhoff directed a 10-university EPA network that studied the life cycles of nanomaterials and their impacts on humans and the environment. He currently is deputy director of the NSF Engineering Research Center on Nanotechnology Enabled Water Treatment, which is developing technologies to provide sustainable clean water systems to many areas in the U.S. that lack sustainable clean water supplies.

Across his career, Westerhoff has published more than 125 research papers focusing on nanomaterials. Overall, his environmental engineering contributions have led to more than 260 peer-reviewed journal publications that have been among the most highly cited in research papers among his peers.

Westerhoff has also been the recipient of some of the most prestigious awards for environment and ecology studies and research. Students who have worked in his lab are employed in industry, government and academia across the U.S. and throughout the world, and many “are making their own important contributions,” he says.

Until recent years, Westerhoff’s research focused on the risks nanomaterials — both natural nanomaterials and those created purposely (engineered) or unintentionally (incidental) by humans — could pose by contaminating rivers, lakes, streams and water treatment and delivery systems.

However, Westerhoff’s research at the nanoscale has shifted to align with some the new research directions described in the Science article, specifically those that examine how engineered nanomaterials could be made to function to the advantage of the environment and humans’ physical well-being, and to spark formulation of cleaner, safer and more effective industrial systems and practices.

The article and related work “report our conclusion that the amount of potentially harmful nanomaterials floating around the globe is relatively very small and the extent of the dangers they present is small,” Westerhoff says. “If we better understand them, we can control the unique properties of nanomaterials and use them to make good things happen.” 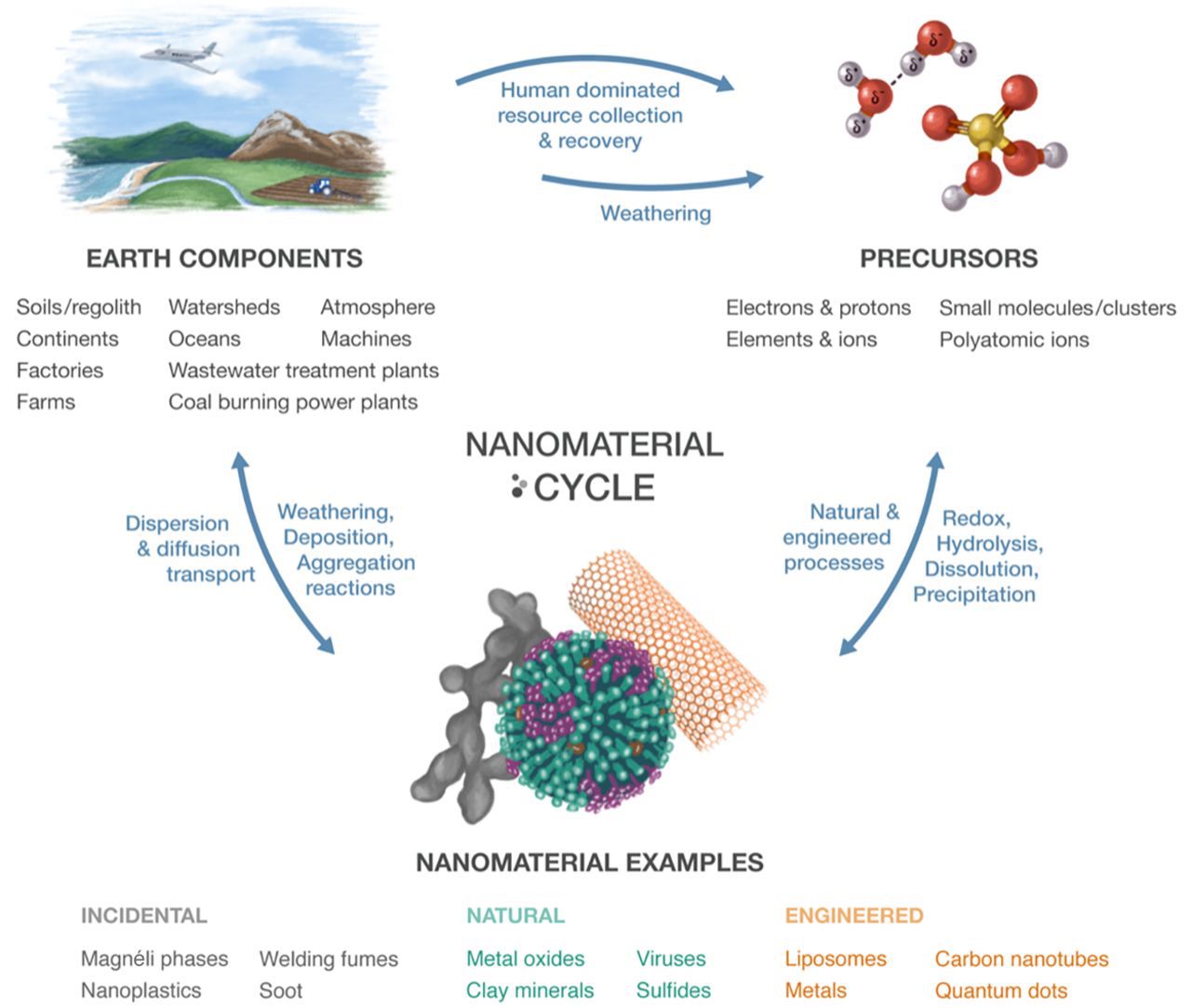 Earth has not only water, rock and chemical cycles, but also a nanomaterial cycle that is fundamental to how the planet works. Examples of the three nanomaterial types — natural, incidental and engineering — are shown, along with connections to both their precursors and the Earth components in which they participate. Illustration: Rose Perry/Pacific Northwest National Laboratory Creative Services

Westerhoff is scheduled to give a talk at a National Nano Initiative event in which he plans to advocate for transitioning research priorities from preoccupation with speculative risks to vigorously exploring the benefits of harnessing what these materials can do at the nanoscale level.

These advances may include nanoscale pesticides that could be effectively administered in lower quantities and with few, if any, detrimental effects on the environment.

Nano-based plant and crop fertilizers to protect groundwater from nitrogen pollution are also likely on the horizon, as well as nanomaterials for use in contamination clean-up operations. A student researcher in Westerhoff’s lab recently grew lettuce plants using low-cost engineered nanoparticles to supplement nutrient fertilizers. When those nanoparticles are incorporated into fertilizer, it results in less nitrate leaching into groundwater. That nitrate can contaminate drinking water and harm humans.

Reducing the amount of fertilizer “means less use of valuable resources like nitrogen and phosphorous and fewer potential negative environmental impacts,” he says.

Westerhoff is also expanding his research focus to explore how nanomaterials may impact integrated human biological systems. He says he views the human body in much the same way as he looks at environments such as rivers, soils or interconnected ecosystems.

For instance, he is conducting other research to find out what nanomaterials could do to help remedy human gut ailments or problems rooted in the brain.

“With the human and environmental health advances it looks like nanomaterials might make possible,” Westerhoff says, “we may be seeing big returns on all of the investments federal agencies have made in this area of research for the past couple of decades.” 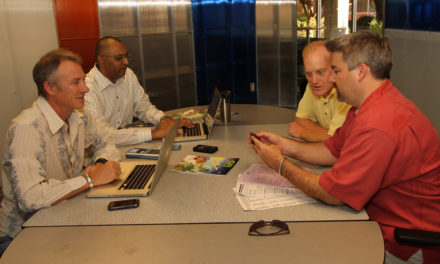