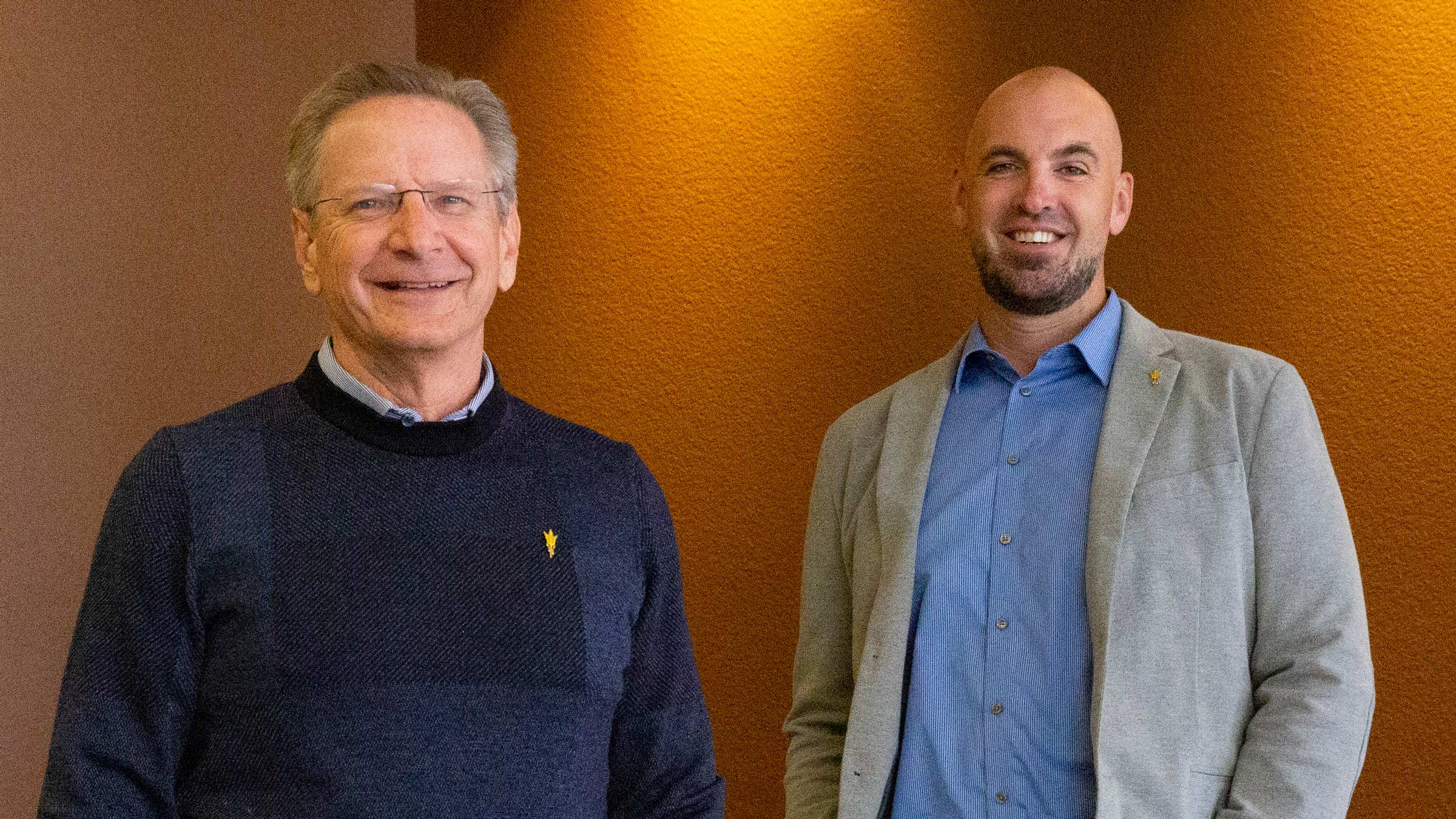 Michael Hool, shown at left, is reinforcing his long-term commitment to ASU innovation through sponsorship of the new Hool Coury Law Professor of Entrepreneurship. Brent Sebold, shown at right, will bring his extensive experience of venture development at ASU into service as the first appointee. Photographer: Erika Gronek/ASU

Michael Hool says he feels encouraged to see Arizona State University apply its impressive facilities and resources to foster the spirit of innovation and support the launch of new companies. He also says he has felt that way for two decades.

As the founding partner of the Hool Coury Law firm in Phoenix, Hool represented ASU in the creation of many commercial endeavors through what was Arizona Technology Enterprises, established in 2003, before it became Skysong Innovations, which moves the university’s research out of the lab and into the marketplace.

“During that work, I connected with a lot of the commercialization and entrepreneurship efforts at ASU,” he says. “And it’s been very rewarding to come alongside faculty and student venture founders who have a dream and then help guide them to achieving it.”

The experience has been rewarding enough that Hool has decided to deepen his engagement by funding creation of the Hool Coury Law Professor of Entrepreneurship within the Ira A. Fulton Schools of Engineering at ASU.

“So many valuable programs have developed at this university over the years, and so many good things have emerged. But it seemed best to target where Hool Coury could add value for ASU,” he says. “We deal with individual investors and venture funds who have an acute interest in engineering startups, so this professorship can help connect these people with Fulton Schools technical entrepreneurs who need guidance and access to capital as they blossom.”

Hool is also pleased to announce that the first appointee for this professorship is Brent Sebold, who serves as director of Entrepreneurship + Innovation at the Ira A. Fulton Schools of Engineering as well as interim director for ASU’s transdisciplinary Master of Science in Innovation and Venture Development program.

“I have had great experiences working with Brent over several years, so it’s clear to me and many others that he’s an ideal person to move the needle in terms of expanding creative opportunities and cultivating new commercial endeavors in this role,” Hool says.

Sebold says he is honored by this appointment and looks forward to collaborating with Hool and the broader community of entrepreneurship at ASU to advance the scope and impact of technical innovation emerging from the Fulton Schools.

“I want to thank Michael for his ongoing engagement and support, and for believing in the work that we are doing here,” Sebold says. “With the Hool Coury Law Professor of Entrepreneurship serving as a point of focus or a conduit, we can achieve much more in tandem with our Fulton Schools Development Office, the Edson E+I Institute, the ASU Foundation, the ASU Enterprise Partners as well as members of industry and others.”

Hool and Sebold first met when Sebold started as program manager for the Edson Student Entrepreneurship Initiative at ASU in 2011. Sebold recalls that Hool expressed a desire to challenge students who had received seed funding from the Edson program. He felt they could help raise awareness of the initiative across the state and the country, and thereby engage additional supporters to expand its impact.

“That’s when we did our first pitch event, or ‘demo day,’ powered by the Hool Coury Law firm,” Sebold says. “These demo day events were a great experience, and they led to creation of an annual Arizona Collegiate Venture Challenge, or ACVC, which drew a wider set of student competitors from the University of Arizona, Northern Arizona University and Grand Canyon University.”

Sebold says the success of ACVC helped transform the event into the even more ambitious ASU Innovation Open, or ASUio, hosted by the Fulton Schools. The flagship event now showcases teams of students from universities around the world who compete for a share of more than $300,000 in prize money and venture support services.

“Of course, this amazing trajectory was driven by many people,” Sebold says, “but none of it would have happened without Michael Hool leading the charge for the integration of competition into our programs.”

Hool says these competitive events are enormously important. He believes they are the best proxy for the pressures that collegiate entrepreneurs are going to face in the marketplace. However, he says the purpose of the competitions extends beyond just attempting to win them.

“We all celebrate the people who win prize money, and they deserve the kudos,” he says. “But I believe it’s just as valuable when someone launches a venture and gets ‘beat up’ during the development of their idea. They’re going to learn from that experience, and their next effort will be better.”

Hool says failure is actually a badge of honor in the entrepreneurship world. And as soon as new venture founders embrace that reality, they are ready to pick themselves up, dust themselves off and move on toward their ultimate achievements.

“These resilient people are exactly who we want to encourage, support and get back out there as entrepreneurs,” he says. “It’s good for them; it’s good for ASU; it’s good for society as a whole.”

In parallel with competitions, Hool says he is eager to support collaboration among ASU students who are seeking to solve society’s challenges but may not know each other. Making these connections across the university was the motivation for the Techiepalooza networking event that Hool Coury Law sponsored in late 2021.

“I see ‘rockstar’ engineering entrepreneurs who have something promising in the works, but they often need some help from peers who are better at the act of selling or the financial side of things,” Hool says. “And, likewise, many entrepreneurially minded students from the W.P Carey School of Business don’t have a lot of technical expertise.”

Hool says it’s very difficult to launch a business if you have just one set of skills. So, the idea behind Techiepalooza is to bring together complementary minds to share ideas and collaboratively move them closer to market-ready solutions.

Sebold says the gathering was a great success and merits continuation.

“We were just coming out of the pandemic shutdown, and it was a great reason to get a lot of entrepreneurially minded and entrepreneurially curious people together,” Sebold says. “But moving forward, I believe the Hool Coury Law Professor of Entrepreneurship can support the growth of the Techiepalooza program, year in and year out, as a convergence of talented people who are all at the genesis phase of the venture creation process.”

Hool believes similar opportunities extend even further across the university community. For the past five years, he has taught a class at ASU’s Sandra Day O’Connor College of Law about the financing of early-stage ventures. During that work, he says he’s discovered that a number of those students are also entrepreneurs.

“They lack the technical acumen of people with whom Brent works at the Fulton Schools, but they know a great deal about the venture capital world,” he says. “So, I believe we need figure out how to bring these people together with ASU’s engineering and business students.”

Sebold agrees that connecting disparate groups represents a significant opportunity for the new role he is assuming. He also says it will be a significant challenge. He explains that there are a lot of “moving parts” within each of these schools at ASU and within each of their various domains. But he says the potential of integrational experiences for entrepreneurial achievement is deeply inspiring.

“I’m very excited to continue work with Michael and his ecosystem of peers, as well as with my peers across ASU, through this new professorship,” Sebold says. “We will keep bringing people together through events like Techiepalooza, and we will push them to compete through programs like ASUio. I also have confidence in the value of taking our venture founders on trips to inspiring places, such as Silicon Valley. There are so many ways we are going to enable ASU students and faculty to make the world a better place.” 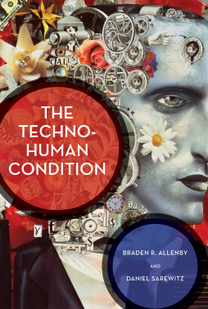 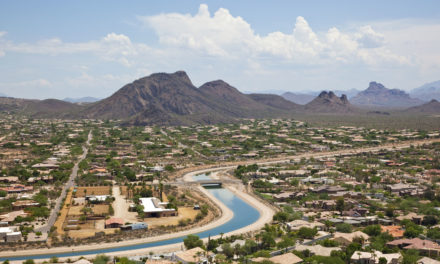 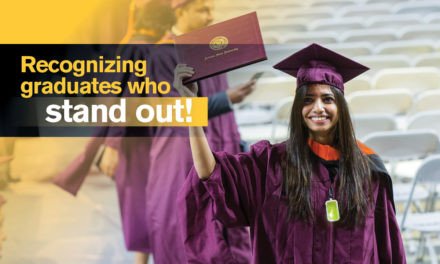