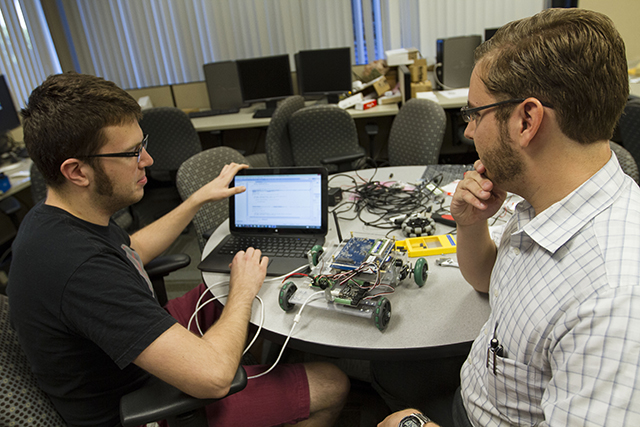 A team of students from the Ira A. Fulton Schools of Engineering has been invited to present a project at the Embedded System Design Invitational Contest, a part of the Intel Cup Undergraduate Electronic Design Contest. The competition is scheduled for July 15-20 in Shanghai.

The Fulton team will present a new robot that can be used to teach introductory students the fundamentals of programming in an easier, more engaging and less-expensive manner. The robot is based on the latest Intel processors, Bay Trail and Quark for embedded applications.

Held every two years, the Intel Cup competition is part of Intel’s commitment to education and is designed to showcase the use of embedded systems using the latest Intel processors, said Yinong Chen, a senior lecturer in the School of Computing, Informatics and Decision Systems Engineering, one of the six Ira A. Fulton Schools of Engineering. Chen was a team coach and judge at the last competition, and will be a judge again this year.

An embedded system is a combination of computer hardware and software specifically designed for a particular function. Embedded systems are used in objects such as phones, cameras, airplanes, household appliances and toys.

Invitations to the Intel Cup are extended to top research universities that have ongoing collaborations with Intel, Chen said. Last time, 160 teams from across the globe participated. Eight were given first-place honors and 16 received second-place honors. ASU’s team was in the second category.

Teams are asked to design, implement and document a working prototype of an embedded system, but there are no set parameters on what the system can do.

“We are the first group to get this next-generation equipment,” Chen said. Walliman, left, with team members Ian Plumley and David Humphries, both computer science majors, test the software program in the FSE101 class of Wandaliz Torres-Garcia, center, a lecturer in the School of Computing, Informatics and Decision Systems Engineering, one of Ira A. Fulton Schools of Engineering. Photographer Jessica Hochreiter/ASU.

Intel Intelligent Systems Group, based in Chandler, is one of the largest employers of Fulton engineering graduates, Chen said. The company works closely with ASU to help ensure the university’s computer science and engineering courses are relevant to the industry.

This year, two teams are working together as part of the Computer Systems Engineering capstone course. They are creating a robot that students can use to learn programming skills. The software team is creating a user interface and a simulator, which will allow novice students to program a robot without knowing how to write computer code. Members of that team are David Humphries,Garth Bjerk, Ian Plumley, Nathanael Stout, and Tracey Heath, all computer science majors in the School of Computing, Informatics and Decision Systems Engineering, one of the six Ira A. Fulton Schools of Engineering. Bjerk is also a student in Barrett, The Honors College.

The hardware team is using the Intel processor to build a robot and write embedded code in the robot. Members of that team are Corey Jallen, Matthew Recchia, Randy Queen, Rizwan Ahmad, who had been awarded the James F. Golder Memorial Scholarship, and Stephen Pluta, all computer systems engineering majors in the School of Computing, Informatics and Decision Systems Engineering.

They will go to Shanghai to present the project. The competition team is coached by Yann-Hang Lee, a professor in the School of Computing, Informatics, and Decision Systems Engineering. Lee also teaches multiple ASU classes using the latest Intel architecture and devices.

“It allows students to learn the concepts of loops, and ‘if’ statements, without having to learn computer programming languages like Java or C++,” Walliman said. “It uses programming blocks that students can put together and then send to a simulator to test, or send directly to a robot. Keeping the syntax simple allows them to focus on the concepts.”

“In the first course, students learn Java and C++, but it’s difficult and boring,” Chen said. “They get discouraged and think they don’t like programming. But when you use the graphic drag-and-drop program, which keeps it very simple and puts the programming in context, students really understand it.”

The hardware team designed a robot that the students can use to test the programming. It can be used for the 100-level computer programming class that all engineering students are required to take.

Currently, students use a Lego robot that costs about $350 and uses Lego’s closed architecture, which is proprietary and cannot be viewed or altered by the students.

The ASU-designed robot costs $150, about as much as a college textbook, and uses open architecture, which will allow students to see and learn more about how everything works together.

It would allow students to purchase a robot for the 100-level course and use it for later courses, too.

“It is an open, reusable architecture for multiple courses,” Chen said.

The team is testing the system with students in the freshman class, FSE 100. Walliman said the program could be used for middle-school students up to college students.

“I’ve worked with people who had significant trouble learning to program because they didn’t understand the fundamental concepts,” Walliman said. “They don’t know how to design and build algorithms. Instead, their biggest takeway from FSE101 is: God help you if you forget a semicolon!”

At the same time, Walliman said learning to get “Hello World” to show up on your computer screen isn’t always a big motivator for students, so working with a robot can make it more fun and keep them engaged.

Walliman said the program can be used in schools or summer camps, and even could become a phone app game, like Angry Birds, that would allow kids to play and learn.

Walliman hopes it eventually could become a start-up business that would improve the way computer programing is taught. 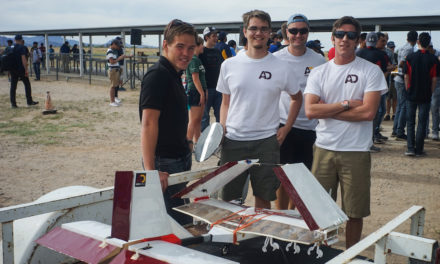 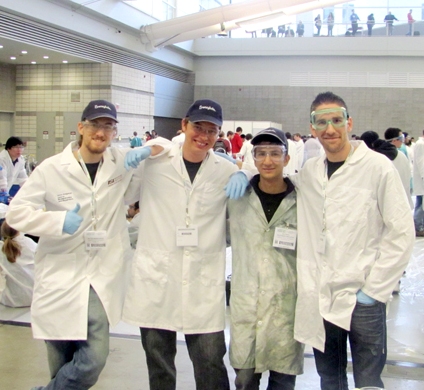 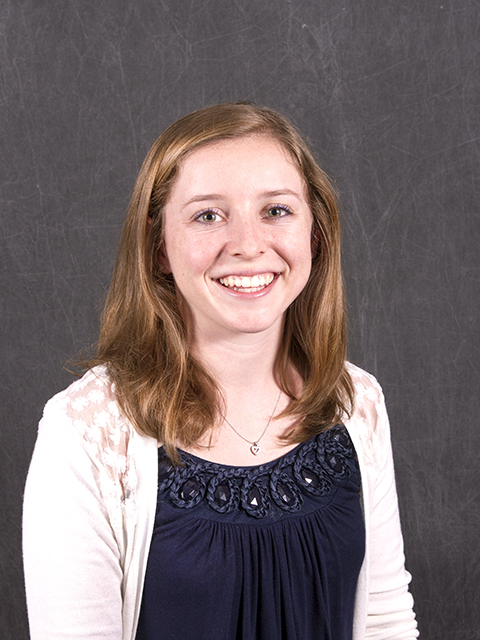 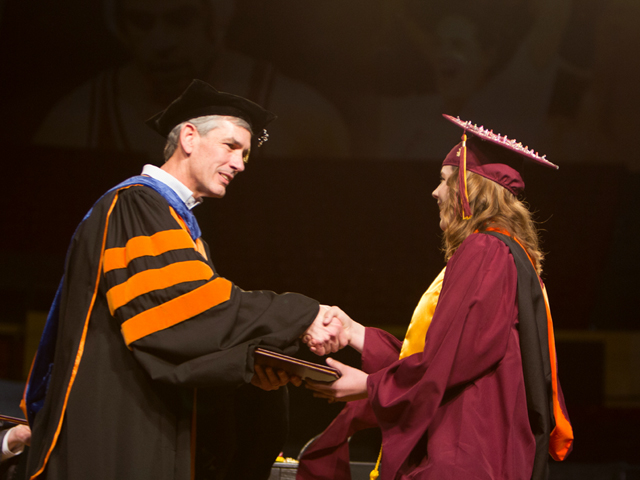