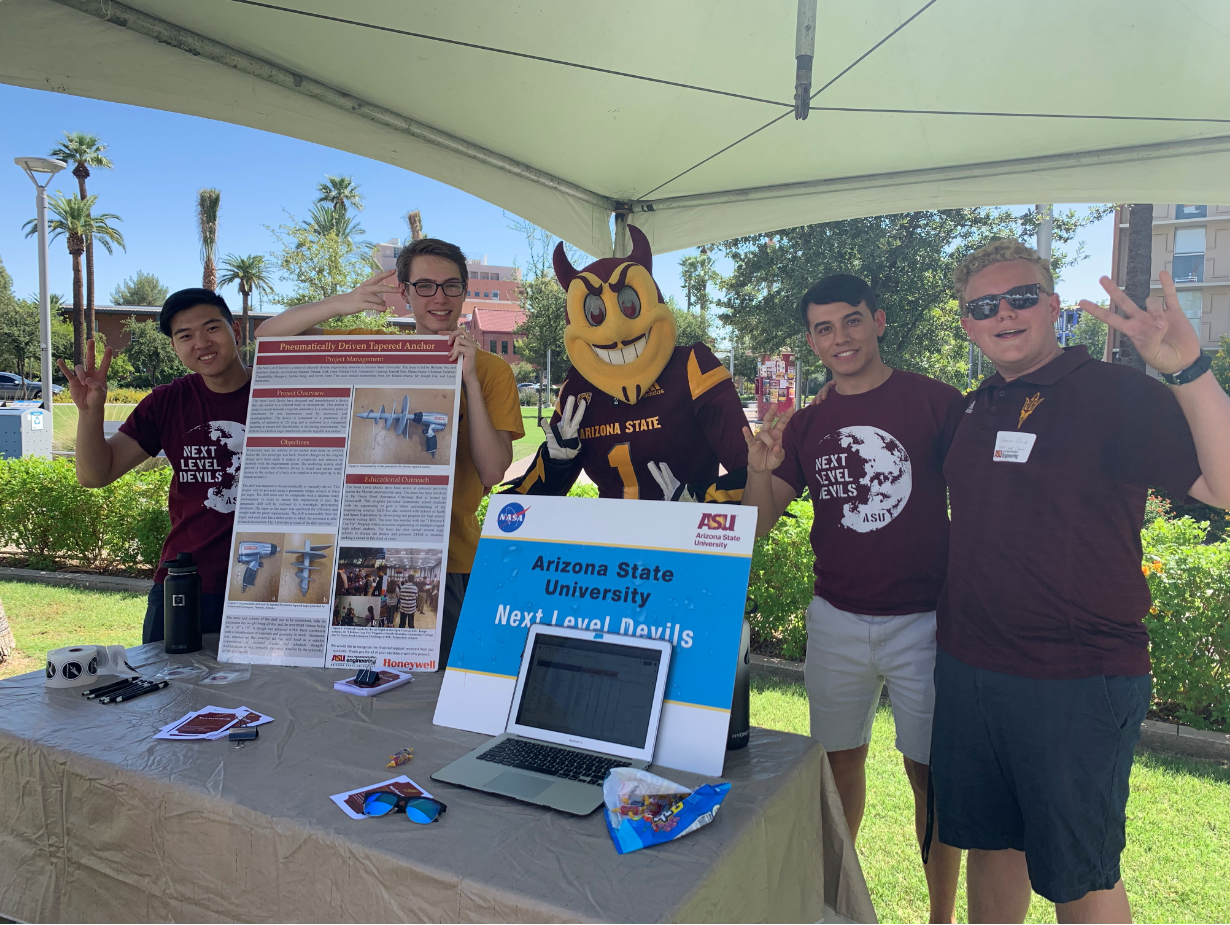 Above: (From left to right) Tyler Kung, Lucas Barduson, Catarino Valle, and Chance Price present their past projects for Next Level Devils at the 2019 Fulton Student Org and Resource Fair. Next Level Devils is an engineering club that competes annually in NASA's Micro-g Neutral Buoyancy Experiment Design Teams challenge. Photo courtesy of Isabel Anchondo. (All photos in this article are archival images taken before current pandemic social distancing and face covering requirements went into effect.)

The future of space exploration rests on the continued creation of new technologies that will allow astronauts and probes to safely do more in space.

The Micro-g Neutral Buoyancy Experiment Design Teams, or Micro-g NExT, is an annual competition running from August to May and hosted by NASA for undergraduate students to design, build and test technologies that address a current challenge in space exploration.

Innovating solutions to these space exploration challenges is the precise goal of Next Level Devils, an engineering club that competes in the Micro-g NExT challenge each year.

This year, two Next Level Devils club teams have design proposals selected for the next phase of the challenge.

“The big part of phase two is that we’re naturally manufacturing and testing our own prototypes,” says club president and aerospace engineering major Isabel Anchondo. “At the end of May we actually are going to ship these prototypes to the NASA Johnson Space Center where they’re going to undergo validation testing in the Neutral Buoyancy Lab in a simulated environment mimicking the conditions they would actually be used in.”

The four 2021 Micro-g NExT Challenges are centered around aspects of the Artemis missions, which aim to land the first woman and next man on the moon by 2024.

One of these challenges, called the Surface Autonomous Vehicle for Emergency Response, or SAVER, focuses on the safety of the crew aboard the Orion spacecraft. The goal of this challenge is to design an autonomous vehicle that can locate and assist astronauts in distress in the water in the event of an emergency egress such as a launch abort or contingency landing.

The Surface Level Devils team, a subteam of the ASU Next Level Devils club, is competing in the SAVER challenge.

The other three challenges focus on lunar surface operations — in particular, the new extravehicular activity, or EVA spacesuit. The Lunar Level Devils team at ASU has taken on the Space Suit Attachment Quick Release System challenge, the goal of which is to design a method of attaching EVA tools to the Exploration Extravehicular Mobility Unit, or xEMU, utility belt.

Zachary Cosico-Probstfeld, a fourth-year student studying aerospace engineering with a concentration in autonomous vehicle systems, is the team lead for Surface Level Devils.

Their prototype design vehicle, called the Personal Emergency Nautical Guardian for Utility Insertion and Navigation, or PENGUIN, is a 2-by-1-foot watercraft that can be carried by an unmanned aerial vehicle and dropped into the ocean where it can autonomously navigate to an astronaut in distress.

The vehicle would also be able to deliver mission-critical supplies in advance of human personnel rescue crews arriving on the scene.

“Right now we’re ensuring that there are proper safety measures for every step of the interaction with the driver and the vehicle,” Cosico-Probstfeld says. “We’re making sure all of our systems are going to function appropriately, but right now we’re in the process of testing each one of those subsystems individually in hopes that in the next couple of weeks we’ll be able to put them together and test them as a whole system.” 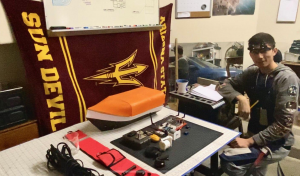 Zachary Cosico-Probstfeld, the team lead for the SAVER challenge, is working on prototyping the PENGUIN, designed to aid in search and rescue efforts for astronauts in maritime environments. Photographer: Zachary Stryczek

Michelle Houchins, a second-year student studying computer science, is part of the software development subteam for the SAVER challenge.

“I’m working with another team member to write code and to make sure all the small components like the servers, GPS and gyroscopes are all implemented together,” she says. “That way the vehicle is able to pick up on the signal that the astronaut would send, take that signal, turn it into a direction and actually navigate in that direction.”

Houchins has been part of Next Level Devils since the fall semester of her first year at ASU and has valued the experience of getting to collaborate on engineering projects that have applications outside of the classroom.

“Next Level Devils was probably the best club for me to join because it has given me so much experience in the engineering design process,” Houchins says. “I’ve gotten to learn so much about working on a project with a team and actually apply what I’ve learned in the classroom on a real-world project.”

The SAVER challenge has numerous applications in future missions and can be a life-saving safety measure in the takeoff and landing stage of missions.

As the Surface Level Devils team builds PENGUIN, several other subteams are working on tasks such as developing the 3D computer-aided design, or CAD, models to send to NASA and their manufacturers for human systems integration.

“We’re also working physically with prototyping materials,” Cosico-Probstfeld says. “We’re creating a foam hole and casting in fiberglass, which should allow us to get a testing analog. We also have a team that is working on all of our human systems integration and planning how the test divers at the Neutral Buoyancy Lab for NASA will be interacting with our device.”

Ricardo Garza, a fourth-year student studying aerospace engineering with a concentration in astronautics, is the team lead for the Lunar Level Devils. His team is tackling the challenge of designing a quick-release system for the next-generation spacesuit called the Exploration Extravehicular Mobility Unit, or xEMU, that will be used in the upcoming Artemis missions.

Garza and his team designed a device called the Secure Holster Instrument for Extravehicular Lunar Devices, or SHIELD, that astronauts can use to single handedly attach or detach tools from their belt such as a hammer, camera or drill.

“We currently have a few 3D printed prototypes,” Garza says. “We’re making little tweaks and everything and we’re ramping up right now to start getting it manufactured in aluminum and stainless steel.”

The team has some milestones coming up within the challenge, including the test equipment data package, a technical paper in which the team has detailed their design work and testing process.

“Our goal is to get to the point where we can test our device with weatherproofing in mind,” Garza says. “A big part of our challenge is for it to be dust proof. The moon has a lot of dust that can get everywhere and so NASA has strongly iterated that it’s really important for our tool to be still functional after getting coated in dirt.”

Catarino Valle, a third-year student studying aerospace engineering with a concentration in astronautics, has been a member of Next Level Devils for three years and is currently working on the prototyping and CAD modeling of SHIELD.

“I’m really looking forward to seeing the feedback we get from NASA,” Valle says. “Hopefully if everything pans out they can use some of our design ideas for the upcoming Artemis missions.”

Resilience in overcoming challenges of a pandemic and competition

Over the past couple of years, Next Level Devils has grown significantly in membership due to Anchondo’s efforts.

“In 2018, we applied for this same Micro-g NExT challenge but we were denied; we didn’t make it past phase one,” Anchondo says. “But last year we persevered, pulled it all together and we got one big team in. We put all of our brainpower into that one.”

This is the first year the club has been large enough to support two teams, both of which were accepted into the second phase of the challenge.

“Before I came to ASU, the club had very few members,” Valle says. “But as a freshman, Isabel took over the club and grew it to over 20 members and has since then gotten three teams accepted into NASA’s Micro-g NExT Challenges.”

The club has also overcome challenges brought on by the pandemic, as they had to swiftly adapt their workflow in the transition from in-person meetings to virtual ones.

“One of the biggest things that changed was that at the beginning of these challenges we usually have a big brainstorming session where we have a big whiteboard and everyone can come up and draw their own design ideas,” Garza says. “It’s been a little bit more difficult online to bring your ideas across in the same way.”

The team overcame these technical challenges by drawing their ideas on paper and holding it up to the camera, but they look forward to being able to meet in person again in larger groups where they can take advantage of the collaborative spirit of the club. 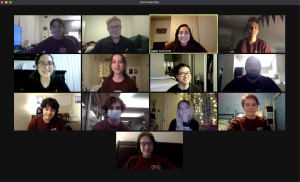 “We’ve had to adapt, and that highlights some of our strengths in terms of being able to break up into small teams and get things done, but we certainly miss our big group meetings,” Cosico-Probstfeld says. “It’s nice to have a room around which you can run from corner to corner and ask people questions and throw things on the whiteboard. It’s a little bit more restricted in the online space.”

While they were unable to physically manufacture their device last year due to COVID-19 restrictions, they are ready to be able to safely build their devices this year.

“I’m most looking forward to getting to build our device and actually test it,” Houchins says. “Last year we got accepted to move on to the second phase and build the device, but because of COVID-19 we didn’t get to build it. This year it’s going to be really awesome to actually see what we’ve been working on for the entire year in action.”

As part of these new efforts to manufacture their devices, ASU aerospace engineering alumna Justine Tang has been helping the team facilitate an industry partnership with Boeing, where she works as an aerodynamics engineer. Boeing has provided Next Level Devils with funding and has also offered to help review presentations and technical documents for the teams.

Looking to the future for testing and upcoming challenges

Once they finish manufacturing their prototypes, both teams will send them to the NASA Johnson Space Center Neutral Buoyancy Laboratory.

Although the testing is done remotely from the team, it is live streamed, and both teams look forward to conducting mission control from Arizona.

“Following that, we’re going to receive the results of the tests,” Anchondo says. “Not only will we be able to see it happen live, but we will be able to hear the feedback from the divers who actually interact with our prototypes. Then we will write a final report with our findings on our design.”

The club is looking forward to recruiting new members as they gear up for next year’s challenges.

“We’ve got a variety of different engineering majors, so we’re looking for all types of team members, especially because the challenges vary every year,” Anchondo says. “This year we had the opportunity to work on an autonomous vehicle system and a quick release mechanism, but that could easily change next year, depending on what challenges they release. We’re really looking for students who are interested in getting hands-on engineering experience.” 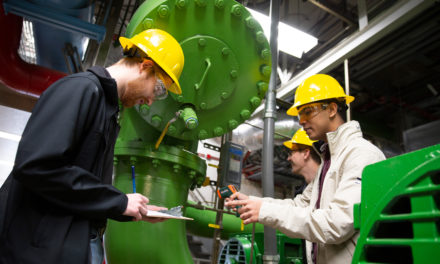 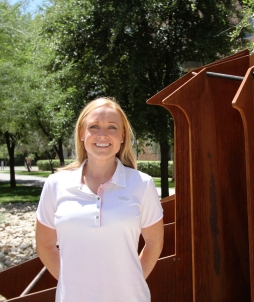 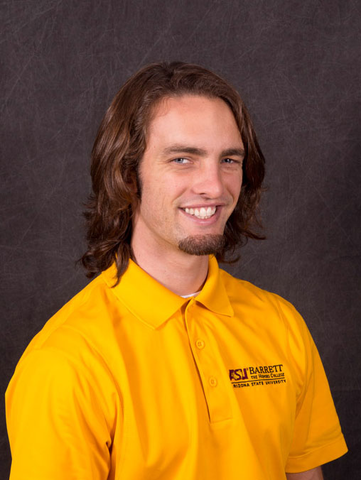 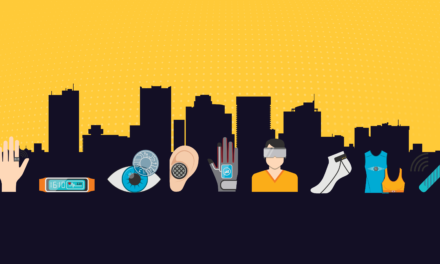