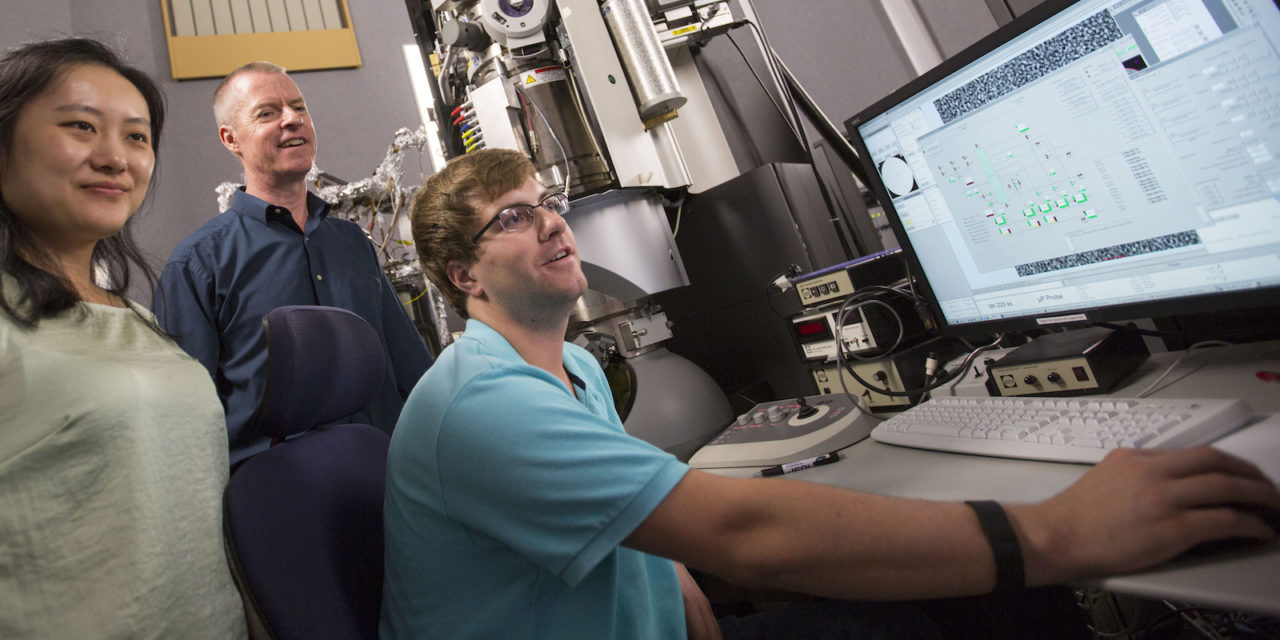 Ethan Lawrence, a materials science and engineering doctoral student in the Ira A. Fulton Schools of Engineering at Arizona State University, studies the behavior of materials at the molecular level, but a few of the most important things he’s learned in the program are macro: networking and organizing is how you get things done, and research means nothing if you cannot communicate it.

A fourth-year doctoral student, Lawrence is a research assistant in the Electron Microscopy for Energy and the Environment Research Group. He and doctoral students from universities across the country have founded the Microscopy Society of America Student Council, and Lawrence was elected treasurer. The student council is helping build a community among the upcoming researchers who are the profession’s future leaders, he said.

“One of the most important things I’ve learned is that networking is how you get just about anything done, whether it be funding for a grant or a finding job or research collaborators,” Lawrence said. “You can be the best scientist in the world, but if you can’t make connections, your work will suffer”, he explained, adding that the relationships students build through council will be important for the rest of their careers.

The student council will also provide opportunities for students to practice communicating their research and ideas. The council organized a student congress prior to the start of the society’s annual congress, Microscopy and Microanalysis in August, and is planning another for the 2018 meeting in Baltimore next August. In addition to his treasurer duties, Lawrence is organizing the networking and social events at the event.

Professor Peter Crozier is director of the Electron Microscopy for Energy and the Environment Research Group and Lawrence’s advisor. He said that starting and running an organization like this develops important skills.

“It’s a great opportunity for students to learn about how to get things done,” Crozier said. Part of that is acquiring the resources needed for a task. When the students needed money for their first pre-congress meeting, Crozier told them to raise it themselves. And they did, by cold-calling companies. They ended up with enough money for the 2017 session and seed money for 2018. Their next task, he added, is to mentor the students who will take over the group when the founders graduate and move on.

Crozier explained that his philosophy as a PhD advisor is to expose students to the management side of research — leading a team, assembling the resources, etc. — as well as the creativity of uncovering new knowledge.

Lawrence, he observed, had already demonstrated his leadership capabilities around the lab, before he got involved in the council. “In my group, Ethan is often organizing the other students and making sure the group runs correctly,” Crozier said. “Some students will work on their own project and ignore the rest of the world, but he has always been more community minded.”

Son of a construction contractor in Dyersville, Iowa, Lawrence always liked building things and taking them apart, but as his interest in science and math grew, he became more interested in the materials used than the construction itself.

Lawrence majored in physics and math at Coe College, a liberal arts school in Cedar Rapids, Iowa, which is known for exposing undergraduates to research. During the summers he participated in research on the chemical and optical properties of glass at the University of Manitoba in Canada and at Corning Incorporated in New York, and interned at Rockwell Collins, an aviation communications company.

He was accepted into eight doctoral programs before choosing ASU. “The Fulton Schools of Engineering’s strong reputation for transmission electron microscopy and it’s facilities are outstanding,” Lawrence said. But the deciding factor was a relationship: “I really enjoyed Professor Crozier, and it’s all about your relationship with your advisor,” he said. Lawrence understood that as a doctoral student he would be working for his advisor for four years, and a good relationship would make the experience positive.

The Electron Microscopy for Energy and the Environment Research Group studies the nanostructures and functions of materials used for energy and environmental applications. Researchers including Lawrence employ transmission electron microscopy, also known as TEM, to study dynamic processes at the atomic level, using innovative techniques to mimic the various conditions that might be encountered in application.

“Our group uses TEM to look at how particles change in different environments,” Lawrence said. “I consider myself lucky to be doing the work I do.” He is particularly interested in materials used for energy generation, including solid oxide fuel cells, which have the potential to provide clean electric energy. Rather than burn fuel, resulting in pollutants such as soot and carbon dioxide, these cells produce chemical reactions with hydrogen or natural gas, resulting in electricity. Byproducts are water or a form of concentrated CO2 that is relatively easy to capture. The big challenge, he said, is temperature. The solid oxide fuel cells currently available operate at very high temperatures, making them impractical for application in, for example, automobiles.

Solving the issues with technologies like solid oxide fuel cells means big payoffs for the earth. Internal combustion engines, which burn fuel, are only around 30 percent efficient, Lawrence pointed out, whereas the potential efficiency for fuel cells is 50 to 60 percent.

After he finishes his degree, Lawrence hopes to go to work in industry or at a government lab. The work is similar to university research, in that scientists probe fundamental structures and processes. The difference lies in the goal. Lawrence said he wants to be part of building something, rather than discovering the underlying science.

In that sense, he’s still the kid who liked to take things apart. 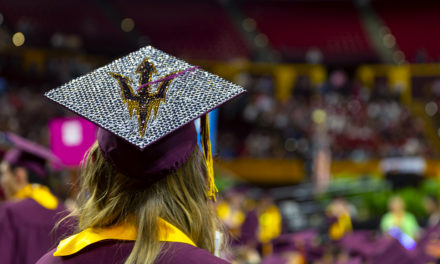 Meet the exceptional graduates of Spring 2019