What do all of these things have in common? They are certainly useful. Some of them save lives. But the one thing that connects them all is that they were developed through research at universities. Academic researchers are continually developing technologies, products and processes that improve our lives and stimulate the economy.

In 2010, researchers at Arizona State University submitted 187 invention disclosures, received 17 patents and launched four start-up companies. In addition, the university signed 63 agreements with private companies, allowing them to use and market ASU-generated technologies. Two of these recent agreements will help patients struggling with chronic health problems.

Managing asthma is a daily battle. Triggers ranging from air pollution to strong emotions can set off an attack, leaving a patient struggling to breathe. Although asthma patients live with the disease every day, most only see their doctors about once a year or during an acute attack.

“So what a doctor gets for information comes from one static point,” says N. J. Tao, a professor in ASU’s School of Electrical, Computer and Energy Engineering. However, health measures like blood pressure and temperature can vary widely from day to day and week to week. A single measurement taken once a year doesn’t provide a complete picture of a patient’s health, Tao says.

Tao has developed a portable sensor that can detect nitric oxide (NO) in a patient’s breath. High levels of this gas indicate that the patient’s airways are inflamed.

Existing devices that measure NO are large and expensive. Not all doctors have these machines in their offices, and they are far too expensive for patients to purchase for home use.

“What we have developed is about the size of a cell phone. It’s also much less expensive,” says Tao. “The concept we have is to provide consistent, continuous monitoring of a patient’s health status over a long period of time. So the next time I see my doctor I have one year of data to show him, to see the trend.”

In fact, patients won’t even have to wait until they visit their doctors to provide their data. The monitor can send its information directly to a cell phone or computer.

The NO detector is just one of several chemical sensors that Tao has worked on since coming to ASU in 2001. He and his colleagues in the Center for Bioelectronics and Biosensors in ASU’s Biodesign Institute conduct basic research on the function and behaviors of single molecules, in addition to their applied work in developing sensors.

They have patented several chemical sensors and biosensors already.

“In the early days we didn’t focus on a specific application,” he says. “We were trying to apply the basic technology to different things.”

The ability to pursue long-term research without a clear outcome in sight is what makes university research vital to innovation, according to Ken Polasko, vice president of business development for Arizona Technology Enterprises (AzTE).

“In practice, research is not predictable,” Polasko says. “In my experience, the vast majority of research results are dead-ends, things that do not work. But if you’re diligent you keep asking more and more probing questions, you ferret out all the dead ends and you come to something that works. Typically it takes a long time and a lot of expertise to get to that place.” he says.

While private companies do conduct research, they tend to focus on short-term goals. They rarely pursue studies that won’t bear fruit for five to 10 years.

In addition, many companies are downsizing their research efforts. For instance, the pharmaceutical giant Pfizer recently announced plans to slash research spending by up to $3 billion and close several of its research facilities.

“In my mind, universities are really complementary to what industry’s doing,” says Polasko. “Industry’s really good at development, and does that really efficiently, whereas universities, their core strength is more on the creative side and the ability to conduct revolutionary research, to look for non-obvious solutions.”

For example, most people think of drugs when they consider ways to treat health problems. ASU bioengineer Bruce Towe, however, is hoping to use a combination of electricity and ultrasound as a side-effect-free alternative.

Towe, a professor in the School of Biological and Health Systems Engineering, has been working to improve neurostimulator technology for many years.

Neurostimulation is the electrical stimulation of the nervous system. It is often used to treat chronic pain, but it has other potential applications ranging from treating epilepsy to rehabilitating the muscles of stroke victims.

“It turns out that certain functions of the human body can be electrically stimulated – and if their function has been lost through a nerve injury, it might be restored – by the application of a very small electrical current,” says Towe.

Current neurostimulator technology often involves surgically implanting a power source, or battery. This power source is connected to leads that deliver electrical current to the tissue being stimulated. An external, handheld device is used to control the amount and duration of treatment.

Ultrasound applied outside the body is intercepted by a tiny microchip implanted at the site where stimulation is needed. The microchip converts the sound energy into electrical signals that are applied to the tissue.

“There’s a lot of creative energy that goes into projects like this,” says Towe, noting that students, other faculty members and medical doctors have contributed to the research over the years.

The hard work paid off in 2010 when AzTE finalized a series of licensing agreements with St. Louis-based EndoStim, Inc. The company plans to use the technology to help treat gastroesophageal reflux disease, also known as acid reflux.

Towe says that AzTE took the lead in helping to get the technology into the marketplace.

“The ball didn’t really get rolling until they grabbed hold of it and really started to push it,” he says. “AzTE does a lot of the marketing of the technology. They act as an interface between the faculty member and the business world—the people who want to license the technology.”

“We really exist to provide a service to the faculty and staff at ASU,” explains Polasko, noting that anyone who works for ASU, not just faculty members, can take advantage of AzTE’s expertise in marketing, law, business and technology.

“Anybody who writes software, develops a computer model, writes a play or music, or develops educational content – that’s covered by copyright, and we can assist them in trying to commercialize it,” Polasko says.

AzTE takes the intellectual property generated at the university and makes it available for development into new products, services, processes or applications. Most people associate tech transfer with patents, licensing agreements and startup companies. But Polasko notes there are many ways that new ideas reach the public.

“The primary mechanism is through students. That’s one of the benefits of attending a research university. It is common for faculty to incorporate the latest research results into their classes,” he says. “The students are not only learning the things that were written in textbooks five or 10 years ago. They are also learning things that are in the most recent scientific literature. When our students graduate, they take that training to their employers— i.e., technology transfer.”

Other ways that discoveries proliferate include journal publications, presentations and consulting by faculty members, as well as licensing agreements with existing companies or new startups.

Polasko says that many people have a misconception that tech transfer offices are moneymaking schemes for universities.

“There’s nothing in our mission that says to maximize dollar value. Our mission is to accelerate and get technology into the marketplace for the benefit of society. And in order to do that with very early-stage technologies, it’s very difficult to make large amounts of money,” he explains.

University tech transfer came into its own in 1980 with the passage of the Bayh-Dole Act. Up to that time, the federal government owned any intellectual property stemming from federally funded research. But the government was not very effective at commercializing those inventions.

“Basically this was an unfunded mandate,” says Polasko. “So the government says universities can take ownership but the government did not allocate additional funding for universities to set up tech transfer offices or to do marketing or hire attorneys to write up legal contracts.”

AzTE receives funding from three sources: the university, the ASU Foundation and a portion of licensing income.

“The average royalty rate for licenses is in the low single-digits,” Polasko notes. “So typically universities are not getting big chunks of the potential upside from their license deals. And the reason is because most of the technology we’re licensing is very high-risk, very early-stage technology that will need significant investment over many years by the licensee to move the technology into the marketplace.”

Because AzTE’s mission is to benefit society through innovations, it has specific requirements for the companies its works with.

“You could imagine that a company has a product that’s selling well in the marketplace. And they discover a next-generation product being developed at the university. They might license that technology and then just put it on the shelf and not commercialize it,” says Polasko.

To prevent that from happening, AzTE requires licensees to define how and when they are going to commercialize the technology.

“Our mission is to support the mission of the university—education, research, public service—and economic development, by taking the technologies that are developed here and figuring out how to get them into the marketplace in the most efficient manner,” Polasko explains.

“My personal opinion is that universities are going to move more and more in the direction of being both educational and economic engines, he says. “Ideally, it’s about taking commercially viable technology and growing it locally.” 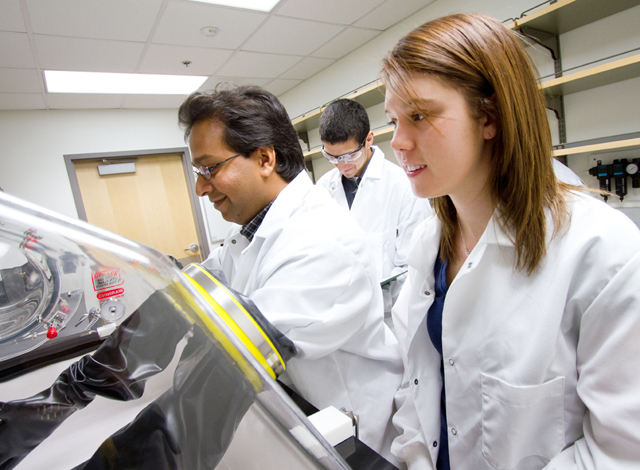 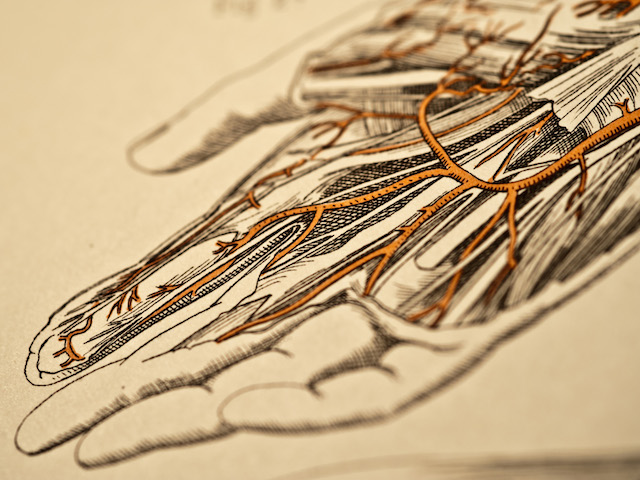 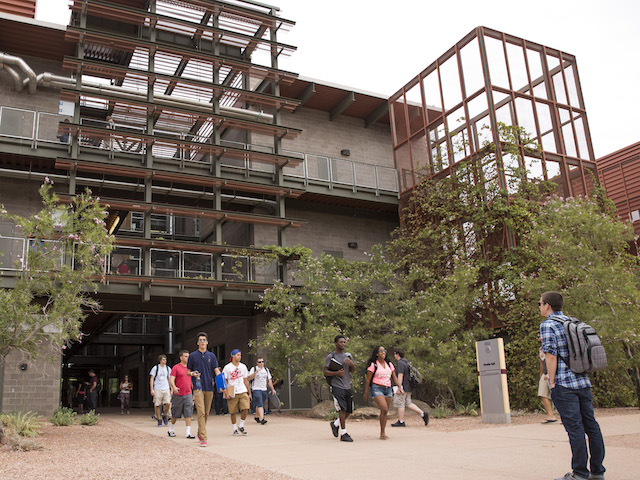 ASU among 12 institutions teaming up to promote reflection in learning