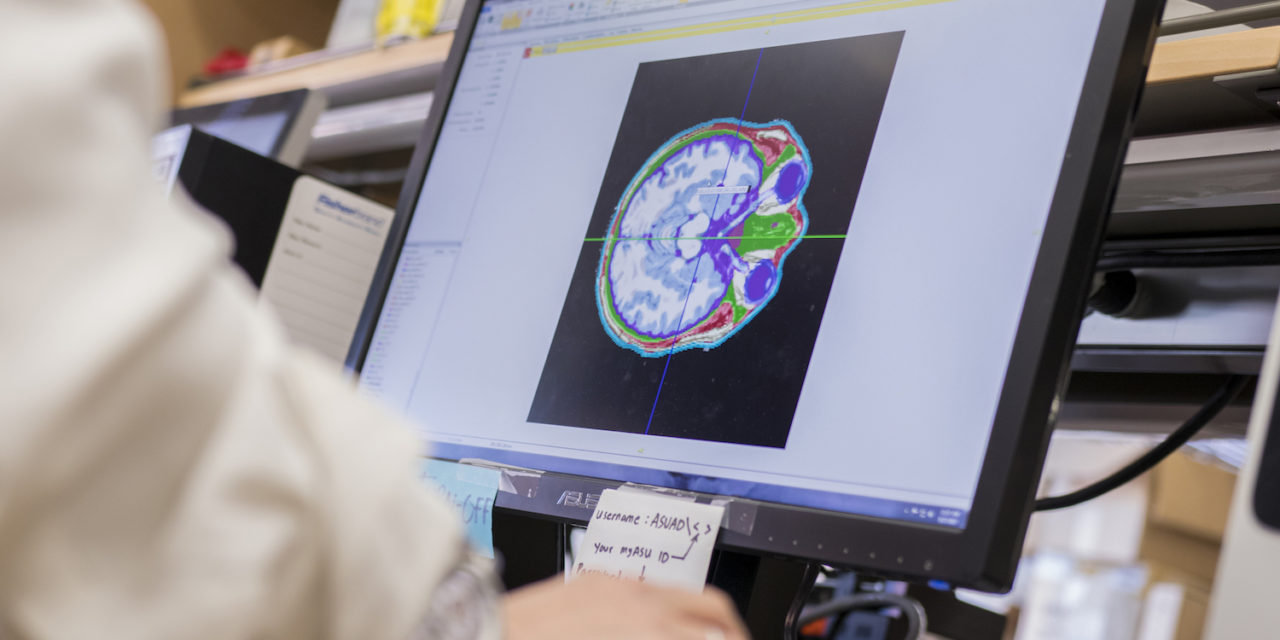 Above: Despite the popularity of transcranial electrical stimulation, or tES, in experimental applications, exactly how electricity travels through the brain is not well understood. With the aid of a $2 million award from the National Institutes of Health, Assistant Professor Rosalind Sadleir hopes to discover how current makes its way through our minds and in doing so, potentially unlock new insights into brain function, stimulation research and treatments. Photographer: Marco Alexis-Chaira/ASU

In recent years, transcranial electrical stimulation, or tES, has seen a surge in experimental applications. The noninvasive procedure employs electrodes placed on the scalp to direct a low current through the brain to try to change aspects of its activity.

The technique has shown promise in treating a variety of ailments as well as improving cognitive function and learning ability, so much so that the Defense Advanced Research Projects Agency has invested in research of the practice. It has even gained traction among laypersons eager to try it themselves, resulting in pockets of do-it-yourself transcranial stimulation communities springing up throughout the internet. 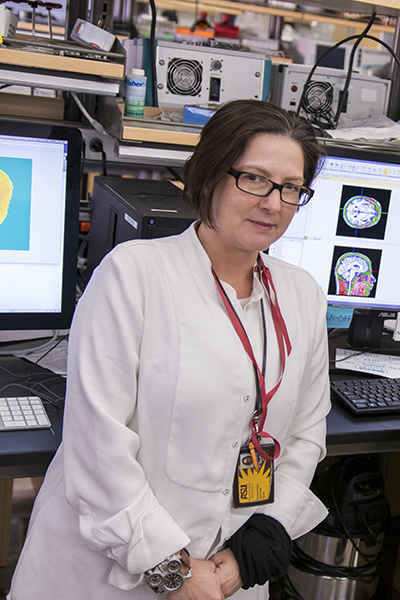 Rosalind Sadleir, an assistant professor of biomedical engineering, is using different forms of MRI to investigate how electrical currents travel through the brain in an effort to better understand the effects of transcranial electrical stimulation. Photographer: Marco Alexis-Chaira/ASU

“Say we would like to affect a particular structure in the brain. For example, language function,” says Rosalind Sadleir, an assistant professor of biomedical engineering at ASU’s Ira A. Fulton Schools of Engineering. “The general approach is to put an electrode as close as possible to what we understand is a brain structure involved in language function, and another elsewhere — on the shoulder or another spot on the head — to complete the current flow.”

However, the potential of transcranial electrical stimulation is tempered by a significant hiccup: we don’t really understand how the current travels through the brain and body, according to Sadleir.

But with the help of a four-year, $2 million award from the National Institutes of Health, Sadleir is working toward a stronger understanding of this treatment. The award is part of the NIH’s Brain Research through Advancing Innovative Neurotechnologies® Initiative, which is “aimed at revolutionizing our understanding of the human brain.” The project involves Principal Investigator Sadleir and her team, as well as researchers at the University of Florida, Professor Thomas Mareci and Assistant Professor Adam Woods. The overall goal is to image both how current flows through the brain during transcranial electrical stimulation, and the effects it has.

Currently, most of our comprehension of how electrical currents behave during transcranial electrical stimulation are based on computational models, which predict how much current runs through a targeted brain area and the route it takes through the body. Key to the construction of these models is knowledge of the shape and size of the head, and its electrical conductivity. While models can be personalized to a specific individual’s head shape, data regarding the conductivity of various body tissues are gleaned from scientific literature stretching back to the 1920s.

Even the most detailed, personalized models do not give researchers an accurate representation of what’s happening during transcranial electrical stimulation, according to Sadleir.

In order to form a clearer picture of how a current travels, Sadleir is using an MRI-based technique called magnetic resonance electrical impedance tomography. Patients are treated with transcranial electrical stimulation while inside an MRI machine, which allows researchers to actually measure where the current spreads.

“We can now measure that current, and for the first time, we are able to compare these literature values with actual conductivities and find out if the models we use are applicable at all to what’s actually happening,” she says.

But understanding how a current travels through the brain only addresses half of the issue.

With the support of the NIH grant, Sadleir also aims to deepen our understanding of the current’s effects with the aid of another MRI technique that is able to detect brain activity, known as functional MRI, or fMRI. This method is able to distinguish between oxygenated and deoxygenated blood, which allows researchers to see which parts of the brain are active due to their demand of more oxygenated blood.

Using the two MRI techniques, Sadleir is hopeful she’ll be able to determine both how currents travel through the brain and the effects they have during transcranial electrical stimulation.

“If we’re able to see where there is a good correlation between the amount of current that’s going through a particular structure in the brain and the effect of that current flowing, then we’ll have so much more information about what is happening to the brain when tES is applied,” says Sadleir.

The end goal, says Sadleir, is to develop both a toolset for those using transcranial electrical stimulation and a robust understanding of the toolset. And the treatment has widely been embraced, unlike previous forms of electrical stimulation therapies such as electric shock therapy, which has seen its share of negative portrayal in media.

“People have been really excited to participate in our project,” says Sadleir. “In many cases, people are very interested and often very keen to have their brains stimulated like this.”

The enthusiasm is reflective of the growing interest in more targeted forms of treatment for conditions such as depression, anxiety and epilepsy, traditionally treated with pharmaceuticals.

“If you can take a drug by mouth that distributes through your whole body to change your heart rate, and not have any problems with that, why would you have a problem selectively applying low-intensity electrical currents?” asks Sadleir.

In time, Sadleir hopes to work out how electricity travels through and influences different parts of the brain, and unlock new insights into brain stimulation research and treatments. 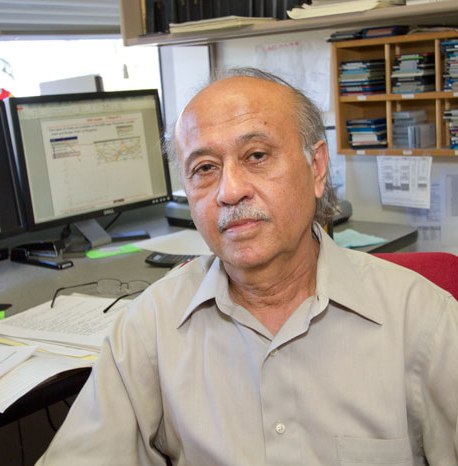 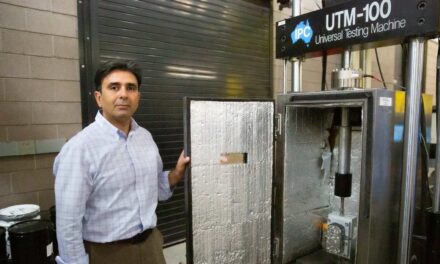 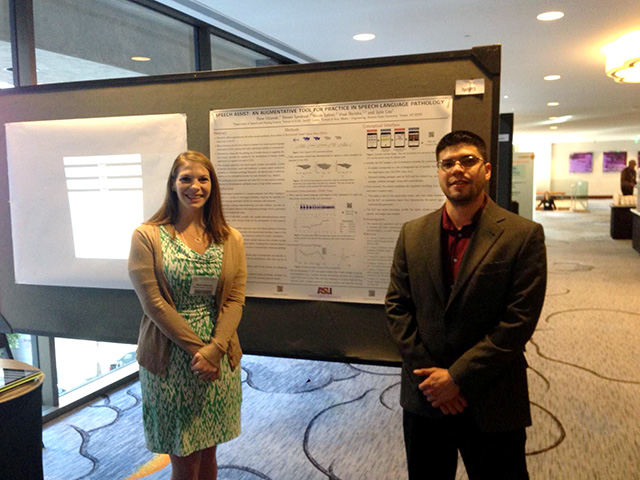