Using a concept called DNA origami, Arizona State University researchers are trying to pave the way to produce the next generations of electronics products.

They’re pursuing advances in nanotechnology that have the potential to enable creation of smaller components for consumer and industrial electronics such as iPods, iPads and similar devices.

Manufacturers want to make the devices smaller and “smarter.” The problem is that this requires making the internal electrical parts of such devices at an even smaller nanometer scale, while also increasing the ability of the components to perform an array of computing, communication and multimedia functions.

Making these components smaller would become vastly more expensive using the current method of manufacturing microelectronic components such as the central processing units (CPUs) of all computers.

ASU’s Hongbin Yu and Hao Yan are teaming up to develop the basis of a new manufacturing method that would keep costs down.

Yu is an assistant professor in the School of Electrical, Computer, and Energy Engineering, one of ASU’s Ira A. Fulton Schools of Engineering.  Yan is a professor in the Department of Chemistry and Biochemistry in ASU’s College of Liberal Arts and Sciences.

Details of their progress have recently been reported in Nano Letters, a leading nanoscience and technology journal published by the American Chemical Society. The news has also been featured on Chemistry World, a science and technology news website of the Royal Society of Chemistry, the leading European organization for advancing chemical sciences.

Yu explains that he and Yan are exploring “how to use top-down lithography combined with modified bottom-up self-assembling nanostructures to guide the placement of nanostructures on silicon wafer surface.”

Top-down lithography is a process by which electrical circuit elements on a silicon wafer are constructed by cutting and etching, in a way similar to how sculptures are made. This is how today’s computer chips are manufactured.

Bottom-up self-assembly is a process in which molecules and/or nanoscale materials are self-assembled into desired structures using chemical bonds or various similar interactions.

Yu and Yan have discovered a way to use DNA to effectively combine top-down lithography with chemical bonding involving bottom-up self-assembly.

This involves a “DNA origami” design technique similar to the traditional Japanese art or technique of folding paper into decorative or representational forms. It allows DNA strands to be folded into something resembling a pegboard on which different molecules can be attached.

In the past it has proven difficult to combine top-down lithography with bottom-up self-assembly because the DNA nanostructures required to make it happen would bind indiscriminately to the silicon platform (called a substrate) – the material on which an electronic circuit is fabricated.

“There have been few successful demonstrations of how to put these bottom-up assembled nanostructures on the surface of the substrate where you want them to be,” Yu explains, “because you cannot just run these devices, you need to know where to connect what.”

To solve the problem, Yu’s research team prefabricated a gold “nano-island” at specific locations on a silicon substrate, then applied the DNA origami that has specific chemical ends that will bond only to the gold island and not the silicon wafer. This allows the DNA nanotubes to attach only to the islands.

The work demonstrates that it’s possible that a DNA double helix can be used to build one-dimensional and two-dimensional structures to enable the manufacture of smaller electronic memory devices – at a cost that would be far less than current manufacturing methods.

“With this demonstration we were able to build patterns on surface that consist of only one-dimensional DNA nanotubes, but our research shows it is possible to produce two-dimensional and even more sophisticated structures that are essential building blocks for nanoscale electronic circuits,” Yu says. “So this is just the beginning of many fascinating possibilities to be realized.” 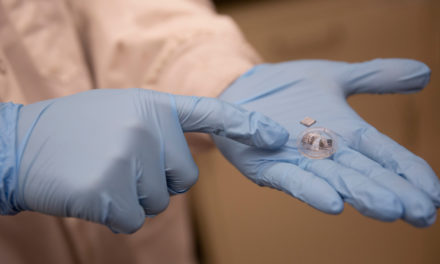 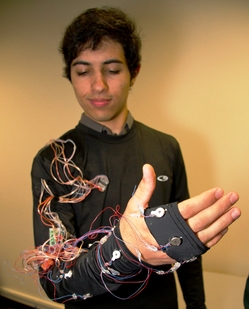 Helping people with disabilities is focus of education effort