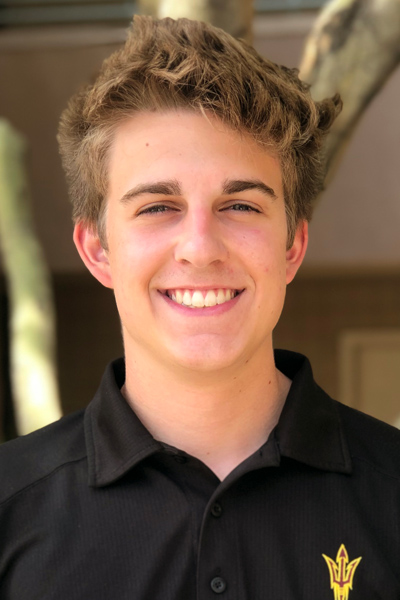 Zachary Garrett wants to make an impact on the world by helping create the widespread adoption and implementation of automation.

“There are far too many people spending their limited time on this earth doing tasks that a computer could do in a fraction of a second,” Garrett says. “If we can automate the easy stuff, we can spend more time on the important problems.”

Garrett, who is graduating with two degrees from the Ira A. Fulton Schools of Engineering at Arizona State University, knew he was on the right path when he landed an internship at Intel.

“Seeing the impact I was able to make in a real-world setting further solidified the confidence I had in my ability to succeed in this field,” Garrett says. “I was able to rapidly learn web development while also making significant contributions to the team’s automated workflow.”

It’s not always the successes that are valuable, however. Garrett remembers an imperfect FSE 100 project that was especially beneficial.

“My team and I built a water wheel that generated zero electricity and we scored last place in the class,” he says. “The number of lessons I learned throughout that experience vastly outweighs the disappointment I felt in our final project demo score.”

The Barrett, The Honors College student’s biggest achievement at ASU was constructing a fully functioning chat service for ASU students to connect with others in their classes.

“In addition, I was able to effectively complete my thesis while also maintaining an internship and working on two separate capstone projects at the same time,” Garrett says.

Professor of Practice Daniel McCarville stood out to Garrett as being one of the most influential people he came across at ASU.

“The enthusiasm he has for the field of engineering and the way he conducts his lectures is absolutely infectious,” Garrett says. “He is the definition of an engineering professional, and if anyone is lucky enough to take one of his courses, be sure to pay attention to ‘McCarville’s Theorems.’ It is the best advice you will get at ASU.”

After graduation, Garrett will stay in Arizona as he returns to Intel to start his new career, where he will contribute to technologies that people around the world will use.

“It is my job as an engineer that I always act with the customer’s best interest in mind,” he says.