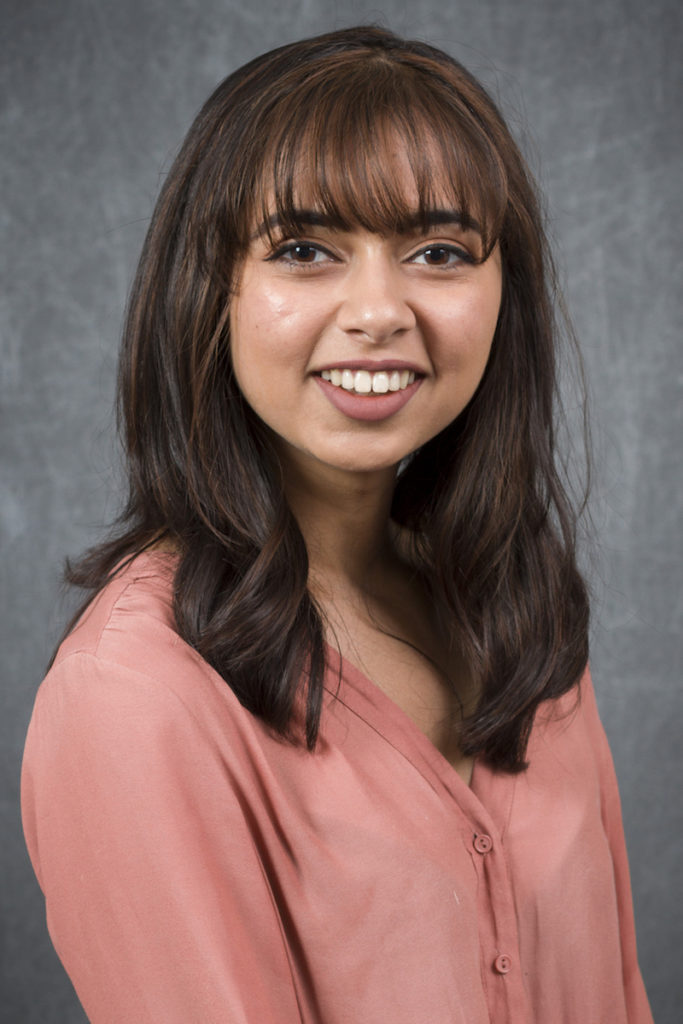 Podcast
“The Daily” by The New York Times
Movie
Star Wars: Episode V – The Empire Strikes Back
Activity
Spending time with friends and loved ones
Book
“The Count of Monte Cristo” by Alexandre Dumas
Hobby
Playing music (ukulele and piano)

To say Niharika Jain is a polymath may be a bit of an understatement. Her diverse interests explain why the computer science major is graduating with two minors — French and political science — and has also completed a certificate in applied business data analytics.

Jain’s full course load — which included an additional 62 credit hours beyond the computer science requirements due to the additional programs — didn’t slow the New American University Scholar from participating in activities outside the classroom, like the Fulton Undergraduate Research Initiative.

Last fall, working under the direction of Subbarao Kambhampati, a professor in the School of Computing, Informatics, and Decision Systems Engineering, Jain partnered with three doctoral students to illustrate the pitfalls in using synthetic data to train machine learning models. Generating synthetic data is an inexpensive alternative to acquiring massive amounts of training data, but it perpetuates biases; when her team trained a model to generate synthetic images of “engineers,” the faces imagined were more masculine with lighter skin tones.

Helping society avoid perpetuating gender and racial discrimination might be an extraordinary task for some undergraduates, but for Jain, it feeds her inclination to solve problems in unique ways.

“If I had an engineering superpower, it would be to have a heightened sense of creativity,” says Jain. “It’s the single most important skill one can have in problem-solving and idea creation. Entirely novel endeavors are often rare and revolutionary.”

Jain realized she was on a path that would allow her to creatively solve problems during the second semester of her freshman year when she was reviewing exception handling in Java using try-catch statements. Try-catch statements allow the program to safely skip problematic lines of code and continue execution.

“Studying this was the first time I realized how powerfully expressive, yet elegantly simple programming languages were,” says the Barrett, The Honors College student.

Jain’s penchant for developing inventive solutions is inspired by her engineering icon, Margaret Hamilton, a computer scientist and software engineer who led a Massachusetts Institute of Technology team to write the software for Apollo 11 that prevented an abort of the historic mission.

Having strong role models and finding ways to resolve the incongruent expectations that exist among students, such as those of different genders and income levels, is important to Jain. For two consecutive years, she has received scholarships from the School of Computing, Informatics, and Decision Systems Engineering to attend the Grace Hopper Celebration of Women in Computing, the world’s largest gathering of women technologists.

Armed with confidence, exemplars of excellence and an array of interests to keep her inspired and motivated, Jain plans to continue her mission of becoming an impactful computer scientist in her own right. In the fall, she will begin a Master of Computer Science degree as part of the accelerated 4+1 program in the Ira A. Fulton Schools of Engineering. This summer, she will return to LinkedIn to complete a software engineering internship.

Jain has some advice for students struggling to grasp the concepts they learn in class:

“For most classes, you can just pull out the corresponding section in the textbook or supplementary information (you don’t have to have read it) on which the lecture is based, and use it to follow along in the lecture. It will increase your understanding and retention surprisingly dramatically.”

Having earned a 4.0 cumulative GPA and graduating with a rigorous major, two minors and a certificate, Jain just may have discovered the secret to undergraduate success.