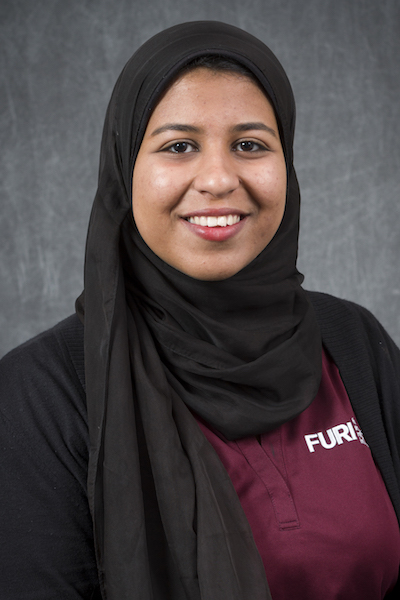 Menna Hussein loves space and wanted to study astrophysics in college to learn more about phenomena like black holes, planet formation and the concept of relativity.

“After looking into the aerospace engineering degree, I found it to be closer to what I’m interested in and to what I want to do with my career after graduation,” says Hussein. “Engineering is far beyond just understanding science, yet it is the tool that would allow you to make science possible.”

Hussein participated in two semesters of the Fulton Undergraduate Research Initiative and worked on a helicon plasma thruster project under Professor Werner Dahm in the Fall 2018 and Spring 2019 semesters. The FURI project focused on coming up with a scaling law that relates all geometrical and operating parameters of the thruster to its thrust performance.

Her interest in rocketry was not limited to FURI and the classroom. Hussein also worked on the design and build of a liquid-fuel rocket engine with Sun Devil Rocketry, formerly Daedalus, and got to lead the propulsion sub-team of the project in Fall 2019. Hussein was awarded a KEEN grant in Spring 2020 to work on a liquid-fueled micro-combuster in the Combustion and Electrochemical Power Systems Lab.

Another big achievement for Hussein was helping to start a chapter for Women of Aeronautics and Astronautics at ASU.

“In Fall 2019, Dr. Valana Wells, the program chair of aerospace and mechanical engineering, got invited to start a chapter for WoAA at ASU, and she reached out to me to help start the chapter,” says Hussein. “This club is dedicated to empower, inspire and provide networking opportunities for ASU’s women in aerospace, and I’m very grateful to have been part of it.”

Outside of engineering, Hussein was the president of the Egyptian Students’ Association in North America – ASU Chapter in Fall 2018 and Spring 2019. She also volunteered at the language fair at ASU in Spring 2020, and also volunteered as an Arabic-English and English-Arabic interpreter at the 67th Intel International Science and Engineering Fair held in Phoenix in 2019.

After graduation, Hussein will be heading home to her native Egypt but will return to ASU to finish her 4+1 accelerated master’s degree.

“My long-term career goal is to work in propulsion,” says Hussein. “I would like to help start an exchange aerospace program for high school students between Egypt and any pioneering country in aerospace, such as the U.S. or Germany. I would really like to get high schoolers exposed to this field. Growing up in a developing country like Egypt, it was a little hard for me as a kid to realize that space exploration or aerospace studies ever existed.”