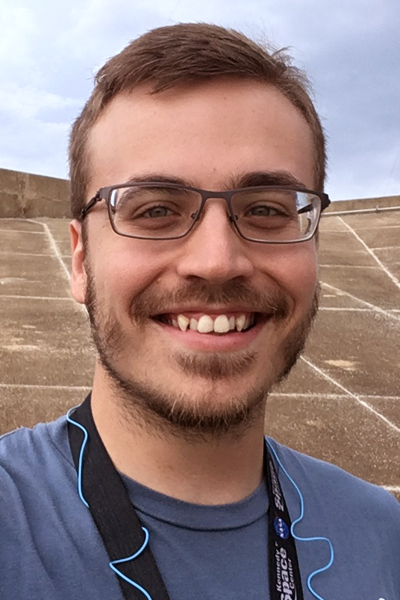 Band
Radiohead
TV show
Firefly
Movie
Star Wars
Book
Lord of the Rings trilogy by J. R. R. Tolkien
Geeky possession
I have too many to list, but right now maybe my Magic: The Gathering collection.

Matthew Dobson is taking his electrical engineering degree and aiming for the stars, quite literally.

Dobson, an online transfer student from Red Rocks Community College, has used his resources to create a stellar educational experience for himself.

In the classroom, Dobson proved to be a star by maintaining a 3.8 GPA. Outside of the classroom, his internships and extracurricular research activities helped him shine.

As a National Science Foundation SenSIP Undergraduate Research Grantee, Dobson’s research helped significantly improve the understanding and implementation of the future quantum computer program in the School of Electrical, Computer and Energy Engineering, one of the seven schools in the Ira A. Fulton Schools of Engineering at Arizona State University. His work resulted in a co-authorship publication in a research journal and participation at professional conferences.

While working in the SenSIP lab, he also helped advise the next generation of student researchers, passing along his knowledge and helping build a community for similar projects.

During his time at ASU, Dobson was able to work with researchers from all different backgrounds. Electrical engineering doctoral student Glen Uehara was one of those researchers and had a profound effect on Dobson.

“He helped me grow as a researcher and introduced me to opportunities at ASU that I otherwise wouldn’t have known about,” he says.

Dobson’s educational journey took him outside of the university with prestigious internships at SpaceX and NASA that spanned four semesters. Not only did these internships provide him with exceptional learning opportunities, but they also allowed him to be a part of history.

“Each time there will be a launch from SpaceX’s pad 39A [at the Kennedy Space Center Launch Complex in Florida], I know that I have software and hardware supporting that launch on the pad,” Dobson says. “And when NASA sends astronauts back to the moon with the Artemis program, I can say that I was there helping build up the systems that support that launch.”

Drawing from his rich academic experience and inspiration from Uehara, Dobson shares his experiences as a mentor to students currently attending his former community college.

With a bright future ahead, Dobson plans to continue his work in the aerospace industry. He hopes to one day become involved with programs that help establish a larger-scale, long-term presence in low-Earth orbit and eventually the moon and Mars.

His post-career plans are a little more down-to-earth and include returning to academia as a faculty member at a smaller community college to help give back to the community that has done so much for him.