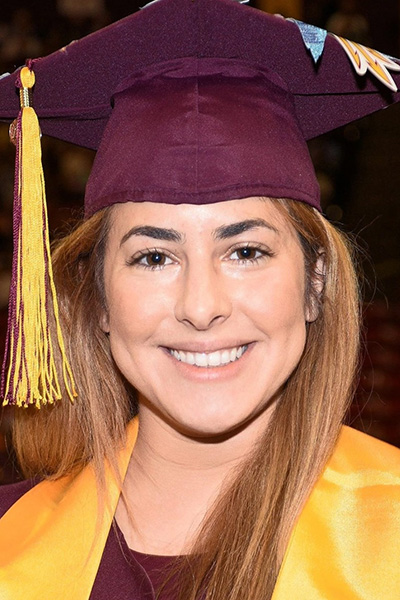 When she was in elementary school, Este Crespo’s great-uncle gave her and her sister a used computer from the local community college where he worked. They became the first in their family to explore Windows 3.1 and connect to the internet.

That computer sparked Crespo’s interest in technology, though at the time, she never imagined the impact technology would eventually have on her life.

Crespo excelled in high school Advanced Placement courses and made the nationally ranked dance team, but her love for computers never diminished.

“In high school, I volunteered to help students get comfortable with their Macs,” Crespo says. “I especially enjoyed helping struggling, non-English-speaking students with basic computer skills.”

Despite her aptitude in the classroom, Crespo’s academics were put on hold and she joined the workforce.

“I didn’t have a chance to complete high school traditionally,” she says, “and for a long time, college was never really an option for me.” It wasn’t long before Crespo decided to take control of her future and go back to school.

“It felt strange and uncomfortable to step into a high school in my 20s, but the day I got my GED was one of the best days of my life.”

Crespo continued her academic journey and pursued a degree at Arizona State University. She put her heart and soul into earning a graphic information technology undergraduate degree delivered online, studying front-end web development and 3D computer animation. She became a regular on the dean’s list while simultaneously working full time.

With a strong academic background, Crespo was encouraged by her advisor to apply for the 4+1 graphic information technology accelerated master’s degree program during her junior year. With that vote of confidence, she made the decision to continue on her academic path.

While in the 4+1 program, Crespo became an expert in technical project management by leading teams of undergraduates in UX research projects. She was also the recipient of two Finish Line grants, and one of 19 students selected from a pool of 1,000 applicants to join Apple’s College Program.

“It was competitive, but after three months of hard work, I was leading my team in data accuracy and metrics and became an active voice for college students within Apple,” she says.

Even with a full-time job and graduate-level courses filling her schedule, Crespo never turned away an opportunity to help the community. She volunteered as a STEM mentor for Latinitas in Austin, Texas, a non-profit organization whose mission is to empower underrepresented girls in technology and media.

“At Latinitas, I met a six-year-old girl who showed me how she could do calculations in the millions, but with no access to technology at home,” Crespo says. “I thought, how can I not help motivate and inspire?”

In addition to Crespo’s grit in the classroom, it was her willingness to support others that earned her an Ira A. Fulton Schools of Engineering Outstanding Graduate honor and an IMPACT Award nomination for her service activities.

“This award is beyond what I could have ever imagined,” she says.

It was the support of Laurie Ralston, a graphic information technology lecturer, that motivated Crespo to continue persevering during Crespo’s academic journey. She honored Ralston at her job during their celebration of Women’s History Month.

After graduation, Crespo plans to continue working as a full-time contractor for Aditi Consulting at Facebook and putting her energy into helping others.

“I plan to volunteer my time to ASU’s mentorship program,” she says. “I want to help raise awareness of technology literacy, device accessibility and, overall, aim to decrease the digital divide.”

Crespo is thankful to ASU and the Fulton Schools for helping her build a career in technology and she hopes her success will inspire others.

“ASU foresaw my potential in higher education and I’m here to keep learning, to show others like me that they can excel at something; a journey that they think is impossible,” she says. “But I’m here to say, it’s possible!”