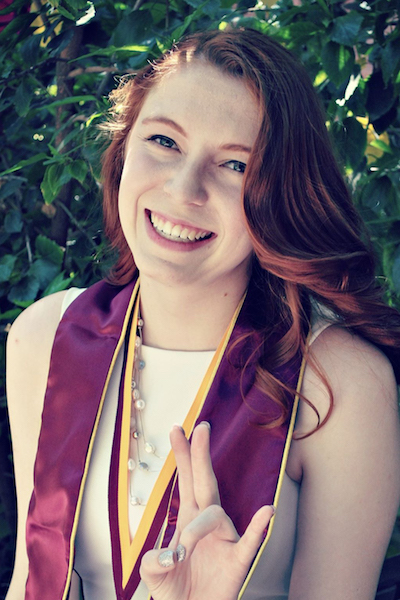 After a decorated undergraduate career in the Fulton Schools, Claire Jordan continued her achievements as a graduate student in the 4+1 accelerated master’s degree program. In her fifth year at ASU, Jordan was inspired to give back to the community.

“I think my biggest achievement at ASU is starting up Graduate Fulton Ambassadors from the ground up,” says Jordan about the graduate student variant of the Fulton Ambassadors program where near-peers introduce prospective students to the Fulton Schools. “With the help of some amazing people in the recruitment office and my awesome executive board, I created a founding team of 24 graduate students. I hope to come back in a few years to see how the organization has changed and grown.”

Jordan says there were many people who impacted her studies throughout her academic career, but she says the biggest mentors she’s had as a graduate student have been staff members in the Academic and Student Affairs program of the Ira A. Fulton Schools of Engineering at ASU.

“Melissa Stine, who works on the student engagement team, has helped me to grow so much as a student leader,” says Jordan. “She has talked me through so many hard spots this year, and I am so grateful to have her help in everything I do.”

Stine manages extra-curricular programs in the Fulton Schools student success and engagement office. The other staff member who was instrumental to Jordan’s success is her supervisor, Anca Castillo.

“I’ve worked under [Castillo] for about a year now, and she has been one of the best supervisors a person could ask for,” says Jordan. “She taught me to think critically about problems in an office setting and encouraged me to apply my engineering mindset to problems that aren’t strictly engineering.”

While she has done a lot of outreach in the past, something that has been new to her this year has been her expanded role in engineering honor society Tau Beta Pi. Jordan orchestrated K-12 outreach as the outreach director for Tau Beta Pi at ASU, helping inspire future engineers.

“This was a big change for me, as I typically just volunteer for outreach events, never plan them,” says Jordan. “This year, we were able to not only participate in homecoming and ASU Open Door, but also hold an interesting booth and make an impact on our community. We taught children to really think outside the box and think about why engineering might be right for them. They designed all sorts of cool things, and we had a lot of really good conversations about how cool engineering is.”

Jordan will be moving to Dallas, Texas, in September to work as an equipment engineer at Texas Instruments.

“My long-term career aspirations are to become a manager at TI,” says Jordan. “I really like the people and working with them, but I also love the technical aspects of my job. I’d love to be able to blend the two together as a manager.”