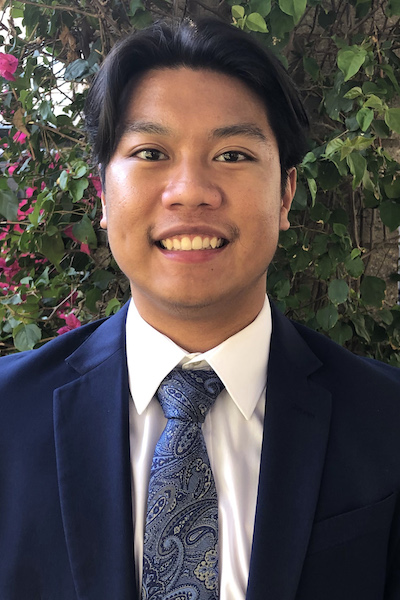 Brian Roman chose to study civil engineering because he wanted to help others while also using his skills in math and science.

“I really like the humanitarian side of engineering,” Roman says.

While he worked hard on his studies, Roman also dedicated much of his time outside of the classroom to helping students and communities near and far.

The Barrett, The Honors College student was a community assistant for honors students and an undergraduate teaching assistant for three semesters in CEE 361: Introduction to Environmental Engineering — the course that made him realize he was on the right path.

“All of the material and concepts I learned in class resonated with me and I could envision myself in that specialty area of engineering,” Roman says. “I figured I could use my engineering knowledge and background to help with environmental issues globally.”

Roman was involved in Engineers Without Borders during all four years as an undergraduate, serving as the organization’s president as well as in other roles.

As part of his efforts for Engineers Without Borders, he worked for two years on the Shonto Mountain Bike Project, which aimed to help the Navajo Nation community of Shonto with public health and ecotourism.

“I made a very conscious choice early on to participate and be involved with organizations, activities and jobs that directly relate to my career goal, which is to make an impact in whatever I do,” Roman says. “These experiences exposed me directly to different types of students at ASU and continuously developed not only my leadership skills but also enhanced my cultural and emotional awareness toward others.”

As he helped others through his outreach activities, Roman received help from Professor Edward Kavazanjian.

“Dr. K is the Engineers Without Borders faculty advisor and I had the great opportunity to be around him during my time with the organization,” Roman says. “He helped me navigate applying to graduate school and also answered all of the questions I had relating to school, life and everything in between. He is always willing to help students, even with his busy schedule.”

After Roman completes his master’s degree, he’s ready to put his life-changing engineering experience and knowledge into practice to change the world.

“The main goal of a professional engineer is to ensure the welfare of the public,” Roman says. “Engineers can help solve environmental issues that can sustain the Earth and its environments.”