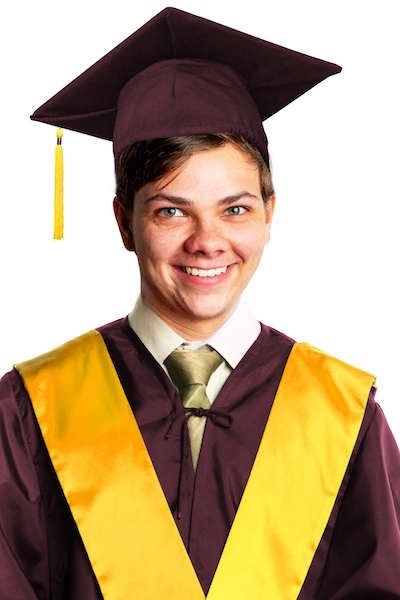 After nearly three years as a political science major and some time in chemical engineering, Augustus Crosby realized computer systems engineering was what he wanted to pursue — even though it meant a lot more school.

But more school was a rewarding experience for Crosby because he could be part of a field that “is the basis of nearly everything we do in the modern world.”

Additional time at Arizona State University also meant he was able to fit in more experiences outside of the classroom, both in engineering and to enrich his life.

One notable experience was his three semesters in the Engineering Projects in Community Service program, known as EPICS, in which students use their engineering skills to solve problems posed by the community.

“I remember getting an email right before the add/drop deadline about EPICS. I thought it sounded really interesting and that I would get a lot out of it,” Crosby says. “I definitely did — not only in terms of technical knowledge in a lot of different topics that I wouldn’t have otherwise looked into, but also in terms of group cooperation and teamwork.”

He also got involved in LGBT clubs at ASU such as the Rainbow Coalition, and he learned about leadership, diversity, empathy and more at Collegetown@ASU.

Outside of ASU, Crosby helped to lead a local LGBT support group called ALL Arizona and regularly volunteered at Feed My Starving Children.

The human connections Crosby made at ASU ended up being one of his biggest takeaways.

“One of the things I hold dear is the close friendships I’ll have for the rest of my life because of these groups,” Crosby says, adding that Senior Lecturers Ryan Meuth and Janaka Balasooriya as well as Lecturer Jared Schoepf and were also highly impactful.

Crosby isn’t done at ASU; he’ll stay on for another year to complete his computer engineering master’s degree as part of the 4+1 accelerated degree program.

But in the near future, he wants to find remote work and move to Argentina. He also wants to join or found a startup, building on his experience in the Draper University Entrepreneurship Incubator Program.

Crosby also wants to get involved in politics down the road with an emphasis on computer systems engineering to combine his double-major experience.

“I want to help push or create legislation in regards to many aspects of tech,” he says. “Engineering has given me the tools to solve problems and, on top of that, it has given me the ability to go out into the world and really change it for the better.”