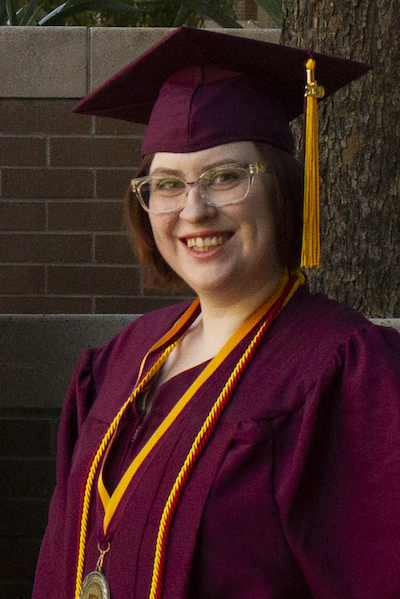 Ari Faye knew that graphic information technology was the degree for her because of its project-focused nature, blend of technology and design, and potential for significant influence.

“What I do as a graphic designer has the power to impact how people see the world, how they think, what they buy and how they spend their time,” Faye says. “It can also bring awareness to important issues, inspire change and help a new business grow.”

During her four years at The Polytechnic School, one of the six schools in the Ira A. Fulton Schools of Engineering at ASU, Faye served in leadership roles, earned countless awards and participated in various community service projects.

These are accomplishments she didn’t think she’d achieve as an introverted freshman. But faculty support and a close-knit community of peers brought Faye out of her shell.

“Professor Christina Carrasquilla encouraged me to pursue activities outside of class and even outside of school,” Faye says. “I’ve grown stronger as a designer and as a person because of her.”

She won 11 graphic information technology, or GIT, awards, and first place in the art division at ASU’s Change the World event. Faye sat on many student panels, participated in Adobe Creative Jams and even designed a wall wrap that is currently installed in one of the science and technology buildings on campus — the largest print job she has ever done.

Of her many achievements, earning the Souza Spirit award was by far her favorite. Named for a former GIT student who passed away in 2018, the award honors students who are actively involved in bettering the design community.

“I cried tears of joy when I received that award,” she says.

“One thing I will always carry with me is the realization that good things happen when you put yourself out there,” Faye says. “I pushed myself to be involved during my time at ASU and my efforts were always rewarded.”After graduating, Faye wants to continue her involvement with AIGA Arizona, pursue a career at a local creative agency and eventually become a creative director.