As a new Aspen Institute Henry Crown Fellow, ASU associate engineering professor Cody Friesen will be immersed in a high-profile “leadership culture” over the next two years. Crown Fellows are expected to employ their expertise and talents to serve their communities and work on solutions to society’s most pressing problems. Photographer: Jessica Hochreiter/ASU

Only 20 of several hundred nominees are chosen each year to be Aspen Institute Henry Crown Fellows. They participate in a program designed to challenge prominent standouts in various fields to expand their leadership skills beyond professional success to a focus on solving society’s biggest problems.

Friesen is on the faculty of the School for Engineering of Matter, Transport and Energy, one of ASU’s Ira A. Fulton Schools of Engineering.

As a Crown Fellow, he will engage in a series of seminars, workshops and retreats over the next two years that build leadership skills and help guide Crown Fellows in employing their expertise and talents in enterprises to serve their communities and beyond.

The fellowship members are predominantly leaders in business, industry, philanthropy, law, public policy and governance, international relations, cultural affairs and the like.

As an academic and a researcher, Friesen doesn’t fit the typical profile. “But they want some people who are a different from the rest of the group, so that may be why I’ve been selected,” he said.

“Many of the fellows are in the corporate world, where you succeed by being very careful and not making mistakes,” Friesen said. “But in what I do, my way is to make as many mistakes as possible as quickly as possible. That’s a very different approach to doing things than most of the other people who will be on this team.”

He does fit in, however, by virtue of his entrepreneurial drive — the key trait the Aspen Institute considers in selecting new Crown Fellows.  Entrepreneurship “is in my DNA,” Friesen said.

His research has produced technological innovations that are the foundation of two growing business startups.

Fluidic Energy is based on advances in battery technology. Friesen has developed the first rechargeable metal-air battery, one that significantly decreases the cost of storing energy.  This has led to the batteries being deployed in emerging markets at commercial sites where the power grid has very low reliability. Fluidic Energy’s batteries have already covered more than half a million power-grid outages, many lasting for well over 10 hours.

The system could potentially enable water supplies to be produced locally and affordably without the need to be connected to infrastructure systems, Friesen said.

Both ventures are attracting investors and partners, and Zero Mass Water is setting up pilot projects in locales in Latin America, Africa and the Middle East where water is scarce.

Friesen’s promising work has brought four grants from the U.S. Department of Energy’s Advanced Research Project Agency-Energy — an especially high number of such grants for a single researcher.

The early success of the two companies has led to the establishment of Zero Mass Labs at ASU, which Friesen said he hopes will lead the way in establishing a more advanced platform for university research labs to move emerging technologies to product development and then into the marketplace.

Friesen is looking forward to his experience as a Crown Fellow to give him an “immersion in leadership culture at a high level that will help me evolve into the kind of leader I will need to be to maximize the potential positive impact of the technologies we are developing,” he said.

His fellowship team members “are fascinating people with very impressive accomplishments, and I am excited to get to work with them.”

Friesen graduated from ASU with a bachelor’s degree in materials science and engineering and went on to earn a doctoral degree in the field at the Massachusetts Institute of Technology (MIT).

He joined the ASU faculty in 2004 and has since been named one of the Fulton Entrepreneurial Professors in the Ira A. Fulton Schools of Engineering, as well as a Fulton Professor of Innovation. He also is a senior sustainability scientist with ASU’s Global Institute of Sustainability.

Friesen has 32 worldwide patents and 11 U.S. patents, and in 2009 was named one of the leading innovators in the world under the age of 35 by MIT Technology Review magazine.

Recently, he began a second term on the U.S. Manufacturing Council of the U.S. Department of Commerce.

Read more about the Aspen Institute, the Henry Crown Fellowship program and the 2015 fellowship team.

Organizing conferences worth the effort 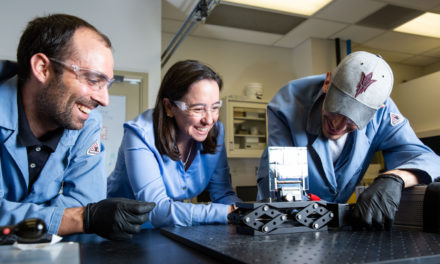