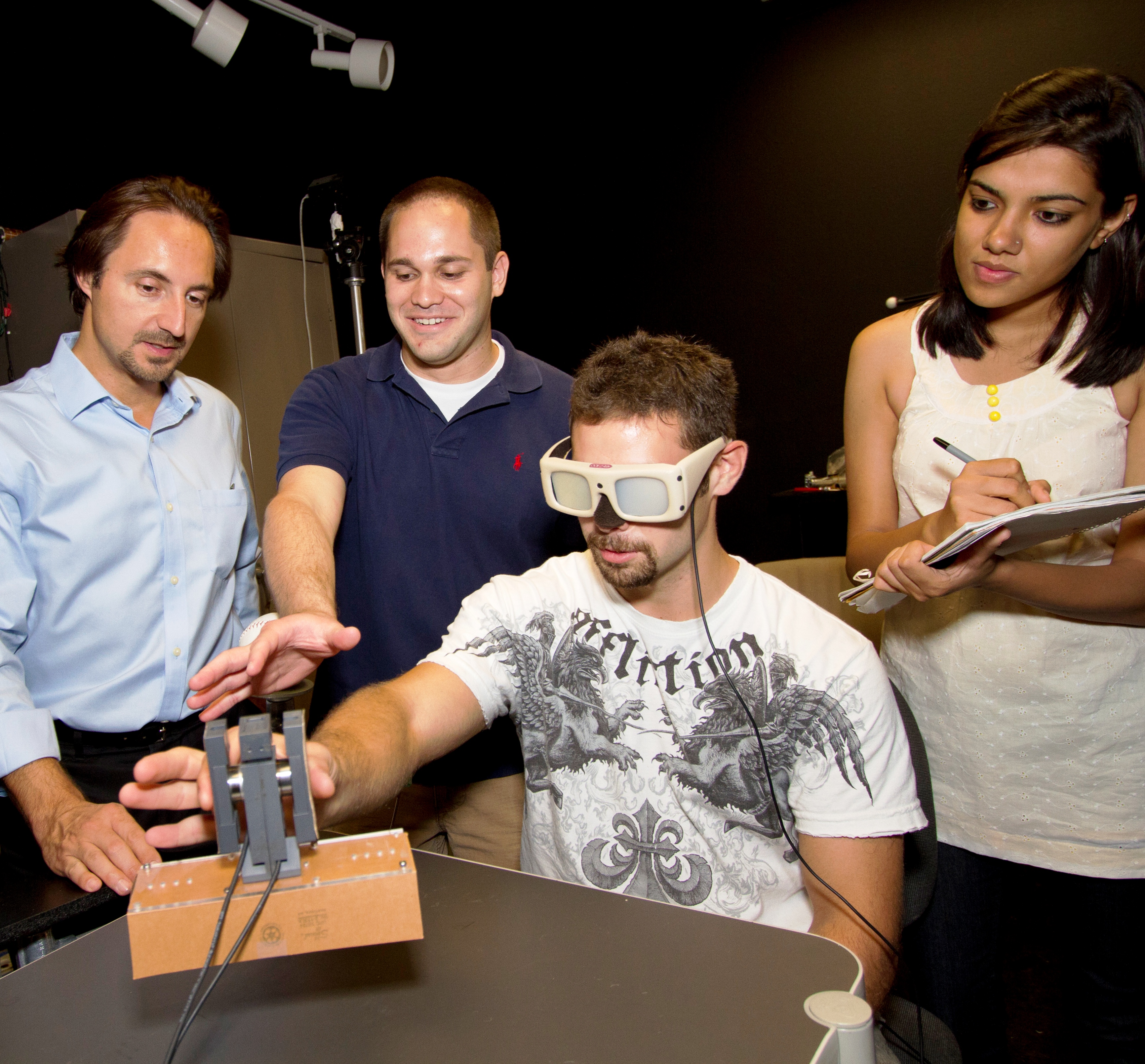 Professor Marco Santello (left) and students in his lab conduct experiments in sensory and cognitive abilities. In the test pictured here, a student reaches to grasp a grip device equipped with force and torque sensors. Vision is blocked at the onset of the object lift by wearing liquid-crystal goggles to remove feedback of the grasp performance. The effect of removing visual feedback of performance errors is quantified by analyzing digit force and position coordination on the subsequent trial. With Santello are (left to right) biomedical engineering doctoral student Michael Cooperhouse, neuroengineering graduate student Matthew Medow (wearing goggles) and biomedical engineering graduate student Megha Chaudhary. Photo by: Jessica Slater/ASU

Research at Arizona State University to better understand the intricate sensory and cognitive connections between the brain and the hands has won support from the National Science Foundation. New discoveries about such connections could benefit people with neurological disorders such as Parkinson’s disease and cerebral palsy, and those who need prosthetic hands.

The NSF has awarded a $640,000 grant to fund a research collaboration between Marco Santello, an ASU professor of biomedical engineering, and Columbia University scientist Andrew Gordon to expand their studies in this area.

Santello also is interim director of the School of Biological and Health Systems Engineering, one of ASU’s Ira A. Fulton Schools of Engineering. Gordon is a professor of movement science in the Behavioral Science department in Columbia’s Teachers College, where he coordinates the Kinesiology program.

The two have worked together for several years in pursuit of deeper knowledge about interactions between sensory feedback and motor actions involved in control of the hand.

In their current project they’re seeking to determine the neural mechanisms that control learning and planning of the grasping and manipulation of objects. They’re examining the visual cues people use to assess object properties before they grasp or otherwise manipulate objects. In addition to using cues such as object shape or density, people often use memory of similar actions performed in the past.

“We can pick up these cues, and we can predict the result of our actions on an object, but we don’t know exactly how the brain does this,” Santello says.

Santello’s focus is on neural control of the hand and the workings of senses such as vision and touch. By manipulating these senses in people with normal brain, hand and muscle functions, Santello studies what causes the performance of an action that is easy under normal conditions to become difficult. This allows him to identify what impact a specific sense has on how the brain controls the hands.

In his experiments, he imposes sensory deficits on test subjects, using goggles to block vision at selected times during the manipulation to interfere with the subjects’ abilities to learn and execute grasping tasks. “We want to understand what aspects of visual feedback help the brain to successfully control grasping of an object and store a memory representation of that action,” he explains.

Gordon’s does cerebral palsy research. His related collaborative work with Santello focuses on cognitive aspects of the interaction between the brain and the hands, assessing the information the brain gains and processes from sensing the shapes of objects and exploring the role of memory of past actions.

“It’s important to discern the basic mechanisms of storing the memory of recently performed actions, of planning future actions and integrating sensory feedback in healthy individuals, so that we might be better able to understand and treat neurological or musculoskeletal disorders,” Santello says.

“In particular, understanding how we integrate ‘what we know’ from prior  manipulations with an object and ‘what we see’ is crucial.” Gordon says. “This is all the more important when our senses, and thus our ability to create sensory memories, is impaired, as is often the case in cerebral palsy.”

Knowledge gained by such research can also be applied to improving neuroprosthetics. Current technology is able to provide extremely sophisticated artificial hands, but controlling the hands remains a challenge.

“The more we understand about the high- level processing that the brain has to go through to plan an action, the closer we will be to building more intelligent prosthetic systems that are capable of more human-like performance,” Santello says.

Like Gordon, Santello has expertise in kinesiology – the study of movement – with a focus on kinematics of the hand, involving how the hand is shaped and how it performs grasping and related actions.

In the past eight years, they have expanded research into the workings of physical motor skills by incorporating recent advances in knowledge of biomechanics, neurophysiology and psychology. Santello and Gordon now examine not only how objects are grasped, but look at why people choose to grasp an object in the ways they do.

By taking decision-making functions into account, they’re trying to  provide a more comprehensive view of the brain-hand relationship  – how, for instance, the brain and hand work together to  create a memory of the position and force necessary to manipulate particular objects.

The proposal submitted by Santello and Gordon for the research grant was among only about 10 percent of the 120 proposals recently approved for new funding by the Perception, Action and Cognition Advisory Panel, which is under the NSF’s Division of Behavioral and Cognitive Sciences.

“It is extremely exciting, not only because it was very competitive,” Santello says, “but also because we are really passionate about improving our understanding of how the brain controls complex movements.” 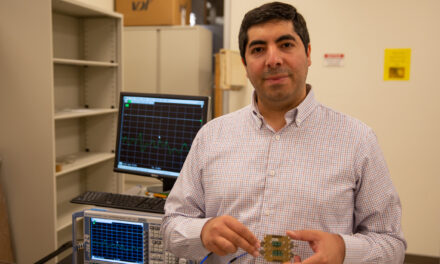 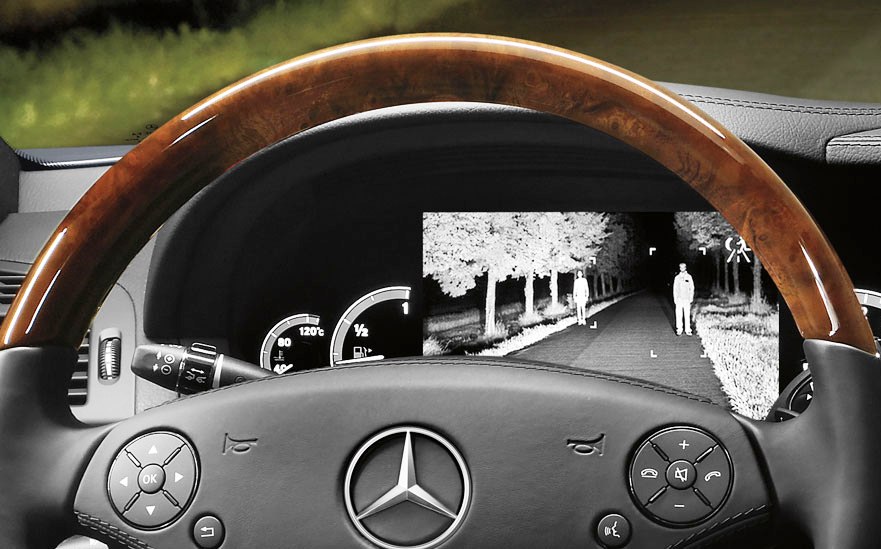 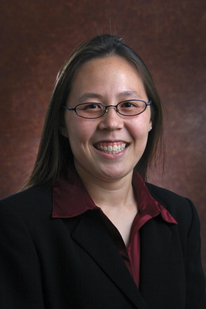