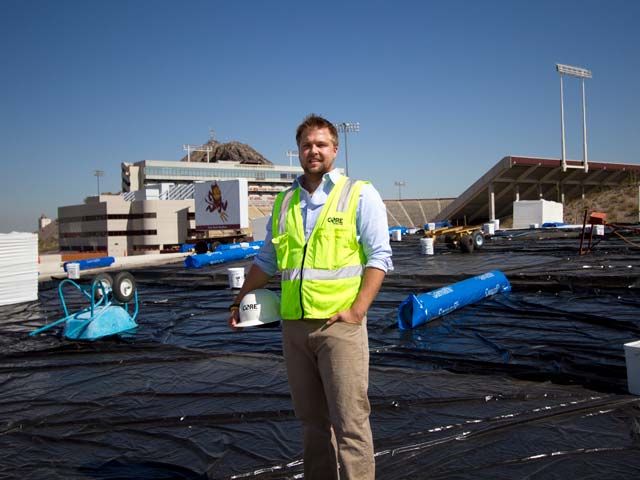 Emerson Ward is intricately more knowledgeable about Arizona State University’s campuses today than he ever was during his years as an ASU student.

The reason: Since graduating in 2006 with a bachelor’s degree in construction management from the Del E. Webb School of Construction Programs, Ward has been helping to build many of the university’s newer facilities and renovate older ones.

He’s now in his sixth year with CORE Construction Services of Arizona, Inc. —a company that does more than $700 million a year in business in seven states—where he rose to a project manager position in just two years.

Ward has managed more than a dozen projects at ASU—large and small jobs adding up to more than $60 million in construction work—including a new and extensively modernized university police department facility on the Tempe campus and renovations of Sun Devil Stadium and the Memorial Union student center.

That list also includes renovations of the Psychology Main Building and labs for the Department of Psychology’s Behavioral Neuroscience Program. In addition he’s worked on projects to fortify seven buildings with new roofing systems, enabling them to support arrays of photovoltaic panels as part of the university’s efforts to use solar energy to power more of its facilities.

Elsewhere in the community he’s been involved in construction for the Deer Valley Unified School District, Gilbert School District and the city of Apache Junction. He also recently helped complete a new police and courts center in Tolleson.

Current ASU projects include reroofing of the Wells Fargo Arena, the Student Services building and Interdisciplinary Building B on the Tempe campus, plus construction of a student housing facility and dining hall on the university’s Polytechnic Campus.

“For me, it’s great to be part of making the campuses better places,” Ward says. “I’m very passionate about it, because the quality of what we’re building will contribute to the aesthetics of the campuses and create environments conducive to students’ success, and it will all have an impact on the character and progress of ASU far into the future.”

He also finds his labors fulfilling because the Ward family “is a Sun Devil family through and through.”

His father, Paul Ward, an attorney, was the university’s chief legal counsel for almost two decades. His sister, Meredyth, graduated from ASU with a degree in nursing.

His wife, Kari Ward, is in her third year as assistant coach of ASU’s women’s gymnastic team. She was an Academic All-American gymnast at ASU while earning a degree in finance, which she received in 2005. She later completed work for a degree in nutrition. The couple now has a one-year-old son, Paul Kingston Ward, and they are expecting a second child in January.

Ward was a four-year letterman on the ASU men’s swim team and captain of the team in his senior year. He held an ASU school record in 100-yard breaststroke event for several years. He earned the PAC-10 Conference Leadership Award in his senior-year swim season.

Being an athlete in a physically demanding sport and a student in a rigorous academic program prepared him for the challenges of the construction profession.

“It forced me to develop time management skills and to physically and mentally survive long days of classes, swim practice and weight training,” he says.

Along with those skills, he’s found success in the industry requires far more than knowledge of construction techniques.

As a project manager, he is often involved in every aspect of job – from managing the construction team, estimating budgets, controlling costs and hiring subcontractors to collaborating on design and dealing with regulatory requirements. He’s also often the person ultimately responsible for meeting each of a project’s various deadlines.

All of that responsibility means “you have to be thick-skinned and also be a people person,” Ward says. “You have to develop a repertoire of ways to communicate effectively with different kinds of people.”

He stresses that message when he mentors current ASU construction management students, as well as the interns CORE hires from the Del E. Webb School of Construction Programs. He has participated on panels judging ASU students assigned to present proposals for mock construction projects.

“All the technical knowledge is important, but in today’s economy you have sell yourself and your company,” Ward says.

“Students need to learn how to work in a team environment,” he says, “and how to present themselves and their work professionally in ways that earn people’s confidence that you know what you’re talking about, that you can provide clients exactly what they need, whether they are a property owner, an architect or a subcontractor. My job is about all that and more.”

Ward had a different major when he started college, but it wasn’t holding his interest. His father then introduced him to longtime engineer, ASU construction management professor and National Academy of Construction member William Badger.

“I can’t remember all the details of what we talked about,” Ward recalls. “I just remember that what he said made me see construction as something that could be creative and rewarding. The passion he expressed made me decide to change majors.”

That perspective on construction as a career also helped him choose among job offers after he graduated.

“There was no doubt in my mind that I wanted to work for CORE,” Ward recalls. “The company’s leadership combined with a commitment to excellence in client relations and service, and the competitive style CORE has in winning projects, made me clear about my choice.”

That decision has paid off.

“The work environment has enabled me to excel, to better myself and my trade,” he says. “I was given opportunities to earn the trust of my employer and our clients. And by doing that, I was able to become a project manager a lot sooner than I might have somewhere else.” 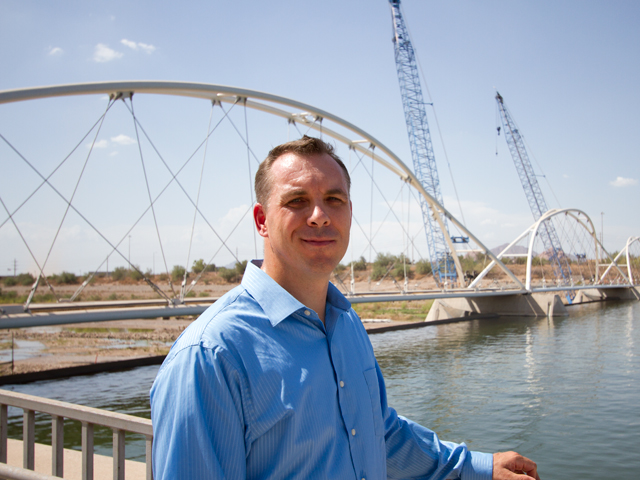 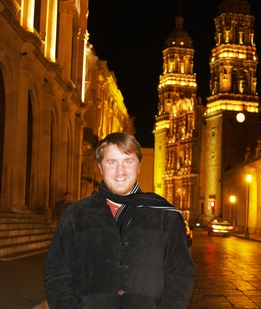